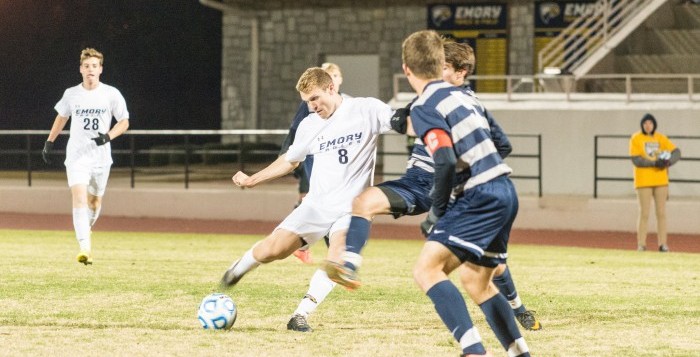 This past Friday, the men’s soccer team ended their season, falling to Berry College (Ga.) 2-1 in double overtime at the Woodruff Physical Education Center (WoodPEC).

The first half started out with Emory on top, recording 12 shots compared to Berry’s four. Sophomore Jason Andrejchak launched a shot towards the goal 30 minutes into play, which was saved by Berry goalie, sophomore Jon Nelson. The rebound left the ball in the box, where junior forward Sebastian Hardington was able to score, putting an edge on Berry.

After halftime, Berry swapped goalkeepers for junior Zachary Wroblewski, while Emory junior Abe Hannigan remained in goal. Berry also stepped up their offense, with 11 shots on goal, while Emory could only record three. With three minutes left in the second half, Berry freshman defender Bobby Grunow was able to score with header from a corner kick.

The game headed into overtime with the score tied at 1-1. In those 10 minutes, Berry stayed aggressive, while the Eagles turned up the defense with Hannigan saving two shots on goal. With no goals, the game was bound for a second overtime.

“Going into the first overtime we felt confident; we thought we were going to get a goal,” Hardington said.

In double overtime, Emory was the aggressor, recording double the shots on goal as Berry. However, with three minutes left, Berry senior midfielder Zak Wallingford scored into an empty net.

“Going into [the second] overtime we knew we had to put away one of our chances. We had created too many to go unfinished,” sophomore Scott Haley said.

Berry, 13-6-1 after the win, moved on to the second round of the NCAA Tournament, where the team played Whitworth University (Wash.) on Nov. 15 at the WoodPEC. Berry lost 0-2.

Emory’s season now comes to a close, with an overall record of 13-4-2. Yet, the team is already thinking about next season.

“The season went very well in the non-conference games, and I think we did pretty well in the UAA,” Haley said. “It was obviously an underperformance to go out [of the tournament] by a team we beat earlier in the season.

But next year, we hope to see ourselves in the same position as this year, but perform better in the tournament.”

And as the Eagles begin thinking about next season, they are as ambitious as ever.

“Overall we had a great season and the main goal for next year is to work hard and make it to the Final Four,” Hardington said.

For the seniors, this was their last game.

“It’s surreal that I won’t feel the excitement of competing in a real game again,” senior defender Jeff Cochran said. “I’m very proud of our season; we finished ranked No. 11 and that’s something to be proud of.”