‘Cadillactica’ Will Blow Out Your Speakers 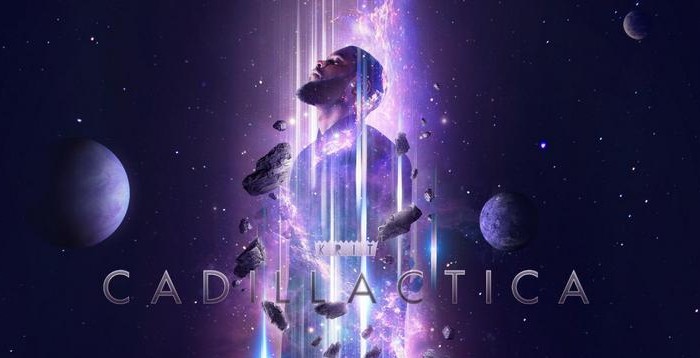 “I wanted to express that there’s a point in everybody’s life when you get older and can’t do the things that you used to do” professes Big K.R.I.T. to Spin magazine. Up-and-coming rapper Justin Scott, whose stage name is Big K.R.I.T., shows signs of maturation and offers a deviation from his usual sound. Sometimes change isn’t necessarily a negative thing, as exemplified by Big K.R.IT.’s sophomore studio album Cadillactica. The K.R.I.T. first heard on Wiz Khalifa’s Kush & Orange Juice mixtape almost five years ago has been left in the dust both sonically and lyrically by the K.R.I.T. on Cadillactica. Similar to his old projects, Scott still manages to win over listeners with his smooth Mississippi accent and impactful storytelling ability. The deluxe album contains 17 tracks and various striking features, including modern popular rappers Lupe Fiasco and Wiz Khalifa, West Coast legendary lyricist E-40, southern icon and UGK member Bun B, British rock artist Jamie N Commons and more.

Big K.R.I.T.’s unparalleled work ethic has not gone unnoticed in recent years. Since his debut with K.R.I.T. Wuz Here in 2010, Scott has grinded out six full major projects, which has established him as the face of progressive southern rap. One major difference of Cadillactica from his previous bodies of work is the production style. K.R.I.T.’s previous mixtapes were laced with various soul samples with the sound engineering of a studio album. An example is “Praying Man” off of Live from the Underground (2012), which samples a soul record of legend B.B. King. Cadillactica surprisingly deviates from this pattern with a plethora of creative, freshly composed beats. With delicate background samples out of the picture, there is room for a wider array of heavy bass lines and drums. The album was clearly made to be roaring from a low-rider with an accentuated bass-boosted sound system. The track off of Cadillactica with arguably the lowest bass levels, “My Sub, Pt. 3 (Big Bang),” lyrically illustrates the image of Scott riding around with two 15-inch subwoofers in his car.

Scott, who raps “Grew up on the country side of town, now I’m ballin’ under city lights,” a man coming from humble Meridian, Mississippi beginnings, is finally given the acknowledgement he deserves. Scott boldly labels himself as the best southern rapper with the track “King of the South,” a title widely recognized as belonging to Atlanta rapper T.I. The lyrics are boisterous, fast and a bit obnoxious over a simple and repetitive keyboard-based beat. For most, excessive bragging can be a major deterrent from appreciating rap music. Luckily, K.R.I.T. checks his boastful nature with appearances from older, respected rappers. Texas native lyricist Bun B is featured on hit track “Mo Better Cool,” which shows that Scott has not forgotten the major figures that had established southern rap culture. Another example of Scott respecting his elder rappers is in the catchy track “Mind Control.” The anthemic tune features veteran 46-year-old California rapper E-40, as well as popular Pittsburgh stoner mogul Wiz Khalifa.

Interestingly enough, my two favorite tracks from the album are the two bonus tracks from the deluxe edition. The first “Mt. Olympus (Reprise)” proclaims Scott’s indifference towards his critics while he angrily yet skillfully rides the angelic choral beat. A steady build of drums only further enhances the intense tone derived from K.R.I.T.’s savage and rapid verses.

“Mt. Olympus (Reprise)” adds Scott to a recent series of rappers who seem to be infatuated with the concept of divinity.  This trend was initiated by Kanye West’s “I Am A God,” and was reinforced by Eminem’s “Rap God.” “Mt. Olympus” accurately demonstrates Scott’s world-class rhyme sequences and abstract sense of rhythm.

The second bonus track on the deluxe album, “Lac Lac,” embodies another facet of Big K.R.I.T.’s southern charm. There is a steady bass line, a pleasant kick and clap rhythm and a peculiar southern twang in the synthesizer line. K.R.I.T.’s Mississippi accent shines as he talks openly in a sanguine tone about rolling around in an old school Cadillac low-rider. Scott interestingly decides to feature budding rapper ASAP Ferg on the track. Ferg recently has been experimenting with his flow and breath control, as observed on “Lac Lac.” The Harlem rapper matches Scott’s southern accent with an unrecognizable yet enthralling accent of his own. Because he speaks through the obstructive filter of complete gold grillz, Ferg’s brisk expressions are interpreted as somewhat indecipherable. At one point in the verse he recites the word “refrigerator” more closely to “furgedator.” Although it may be difficult to understand the individual words of the lyrics, the overall sonic vibe of the verse is nothing short of sublime.

Cadillactica is an admirable body of work that evokes an understanding of a culture revolving around dipping in low-riders, 40-ounce malt liquor and an aspiration for something more out of life. Through creative production techniques and relevant storytelling, Big K.R.I.T. successfully refines his already impressive resume with his second studio album. His deviation from heavy sampling techniques to make way for original composition has taken his career onto a favorable path. With a clear level of innovation at the forefront of Big K.R.I.T.’s objectives, a growing fan base waits in anticipation for what is to come next.