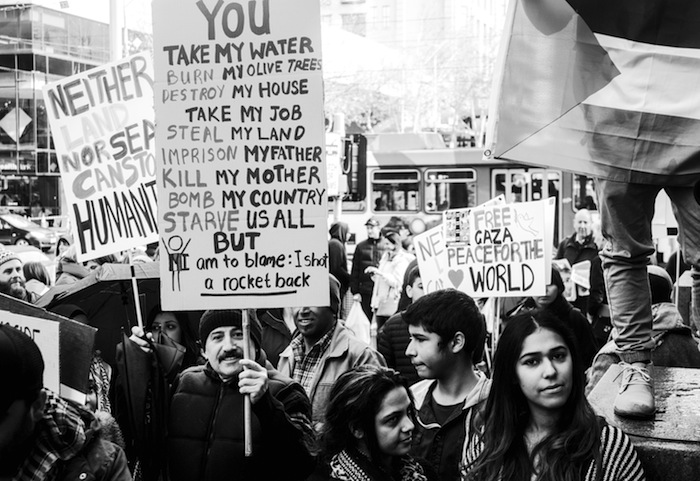 At Wonderful Wednesday last week, Emory-Israel Public Affairs Committee (EIPAC) hosted an event called “Ask Me Why [I Love Israel].” Students were prompted to make signs expressing their personal love for the country; responses included “Because It’s the most free country in the Middle East,” “Because the people are diverse and united,” “Because Israel loves me,” “Because It’s the most accepting place on Earth,” “Because we value human life” and “Because why wouldn’t I?!” This event ignores many of the nuances present in the Israel-Palestine conflict and minimizes the struggles of Palestinians living in the occupied territories of West Bank and Gaza. The event promoted a blind patriotic love of a country that routinely seizes land, prevents Palestinian sovereignty and continues to commit numerous human rights violations.

In questioning this event, and Israel’s actions as a whole, we are not expressing hate for the country or its people; however, there are also many reasons to question Israel’s actions – especially in light of this summer’s most recent conflict. Israel is a country which is comprised of many opinions and perspectives on this conflict, and we refer to the nation unilaterally for the purposes of reflecting on this event in particular. We are by no means in support of the atrocities committed by Hamas, but we also feel that the Israel-Palestine conflict deserves the nuance beyond a “love” or “hate” of a country or people. The side of the Palestinians is often unheard at Emory, because events like “Ask My Why [I Love Israel]” ignore human rights violations and oppressions committed by Israel towards Palestinians.

Holding an event that lacks an educational component in regards to the Israel-Palestine conflict ignores and perpetuates support for the violent and oppressive aspects of the Israeli government. Though the conflict has been ongoing for decades, a war erupted in Gaza just a few months ago. The conflict wounded soldiers and civilians on both sides, but Palestinian casualties, particularly civilian casualties, greatly outnumbered Israeli casualties: 69 Israelis died, with 94 percent being soldiers, killed mostly during the ground assault on Gaza, while 2104 Palestinians died, with 70 percent being civilians and 495 being children. During this conflict, Israel bombed multiple United Nations (UN)-operated buildings, including a school that was filled with refugees. The attack killed at least 20 people, and led the UN to accuse Israel of violating international law. Yet beyond the setting of war, Israel has consistently expanded its own territory by occupying Palestinian land, and has systematically oppressed Palestinians by building checkpoints throughout Palestinian territory, constructing a separation wall that annexes Palestinian land, co-opting Gaza’s economy through an economic blockade, demolishing the homes of Palestinians to make way for new Israeli settlements and preventing Palestinians from accessing adequate health care. The Israeli government has also committed a myriad of other human rights violations since 1948 (the official creation and recognition of the state), including forced sterilizations, prison torture, detaining political prisoners, blocking asylum procedures for refugees and more.

Events like “Ask Me Why [I Love Israel]” create an environment in which it is acceptable to ignore and reject the nuances of the Israeli occupation and Israeli-Palestinian conflict as a whole. During the Gaza war this summer, hundreds of men, women and children died; thousands were injured; and even more suffered from hunger, illness and immense poverty. The Wonderful Wednesday event at Emory negates all of this suffering as well as the suffering of Palestinians at the hands of the state of Israel since 1948 by defaulting to a blind love of a country that perpetuated much of this conflict. The nature of the Israeli-Palestinian conflict is that it has many roots, including the forced displacement of Palestinians from 1948 until today, the ongoing economic siege of Gaza and the 50-plus years of Israeli occupation of UN-recognized Palestinian territory. The patriotic discourse perpetuated by events like “Ask Me Why [I Love Israel]” erases and silences the suffering that Palestinians experienced and continue to experience since 1948. In order to comply with Emory’s commitment to ethical engagement, it is important to address all sides of an issue – especially one as politically charged and ethically pressing as the Israel-Palestine conflict.

Many of the responses given by students during this activity at Wonderful Wednesday included references to Israel’s successes, including political exceptionalism (“the only free country in the Middle East”), technological innovation (“the most biotech startups per capita”) and environmental progress (“it recycles 70 percent of its waste water!”). All of these perceived “successes,” and most of Israel’s successes as a nation since 1948, are derived from its oppression and systematic displacement of Palestinians and contingent upon treating Palestinians like second-class citizens through over 50 laws that discriminate against Palestinian citizens of Israel. This event ignored the social and political oppression of Palestinians as a key factor in Israel’s accomplishments, as evident from the responses. Classifying Israel as the “only free country in the Middle East” erases Palestinian existence from the map entirely, as thousands of Palestinians have been displaced from their home and subject to systematic human rights abuses by the government of Israel since Israel’s creation in 1948. Israel’s technological innovation is a result of immense foreign investment from countries like the United States that support Israel’s economic development while simultaneously turning a blind eye to the displacement of Palestinians that gives Israel the land and resources with which to develop infrastructure. The environmental advances that Israel has made, particularly how the country recycles “70 percent of its waste water,” can be directly attributed to how Israel dumps waste into Palestinian villages and more broadly, withholds water from the occupied territories. Praise for Israel’s environmental advances also disregards the environmental harm, such as groundwater pollution, that has come from the lax regulations on Israeli companies operating within the occupied Palestinian territories.

Generally, Israel bolsters its own economic development by treating Palestinian economic autonomy as a negative externality of its own advancement. However, it is important not only to focus on Israel’s advances, but also on how Israel has systematically destroyed the foundation for Palestinian quality of life since 1948. Measures that Israel has imposed for its own political and economic benefit have put Palestinians at an immense social, political and economic disadvantage. For example, Israel’s closing of the border between itself and Gaza, and subsequent prevention of exports from Gaza to the world, has completely shut down Gaza’s economy. Israel has facilitated the destruction of basic infrastructure – including hospitals, schools and roads – which directly affect any basis of Palestinian self-sufficiency and the possibility of any distribution of humanitarian aid. The agreement implemented on the Aug. 26 ceasefire brought nothing new to the table to help the humanitarian crisis in Gaza – containing nearly identical terms as the 2012 ceasefire agreement, it has opened border crossings with Israel to distribute humanitarian aid, extended fishing zones to six miles off of Gaza’s coast and opened the Rafah border with Egypt. Yet further Palestinian demands were not addressed, such as providing assistance to rebuild Gaza’s international airport (which opened in 1998, and was destroyed by Israel in 2002 during the second intifada), or helping to build a seaport which has been in planning for 20 years (and would bolster Gaza’s trade-based economy). The satisfaction of these two demands alone would create thousands of jobs for Palestinians, helping to address the over 40 percent unemployment rate in Gaza today.

In addressing any sort of conflict or contentious issue, an educational component is key, and that component must shed light on all sides of the issue. Bias is inevitable, but events like “Ask me why [I Love Israel]” silence oppositional voices on a campus where supporting the human rights of Palestinians is already taboo and spread misinformation on the occupation and Israel’s actions in general. One of the responses, “There’s no reason not to love Israel,” clearly demonstrates the naive and historically blind nature of the event as a whole. There are numerous reasons to question and critique the Israeli government’s actions and policies, and events like “Ask me why [I Love Israel]” prevent students from understanding basic facts regarding the conflict, limiting public and ethical engagement with America’s support for Israel. We ask that the Emory community, and EIPAC specifically, make a more conscious effort to engage with all facets of the Israel-Palestine issue in order to create a campus that is increasingly inquiry driven, ethically engaged and welcoming to people of all backgrounds.