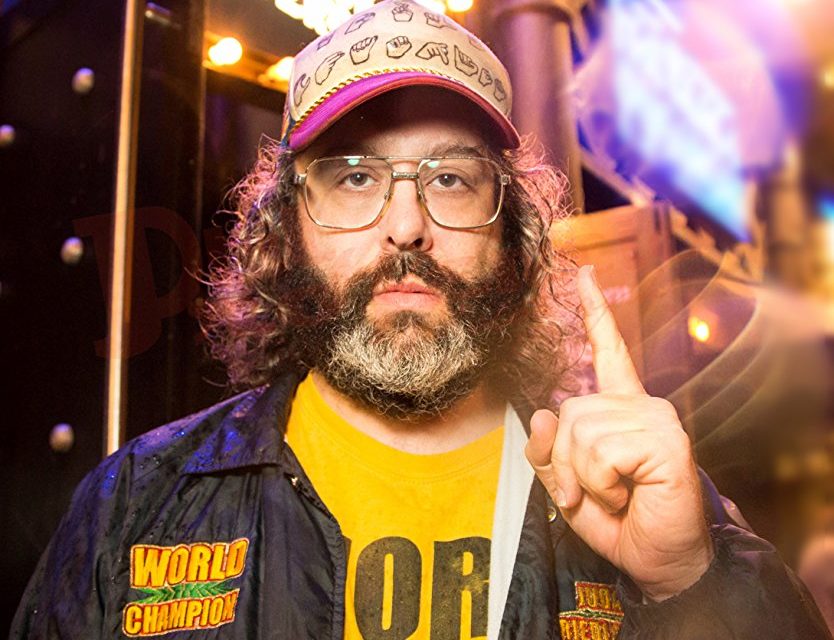 The turbulent 2016 presidential election and its effects have provided comedians a wealth of inspiration for material. Judah Friedlander, best known for playing Frank Rossitano on the popular NBC sitcom “30 Rock,” drew mostly from political issues for his comedy show at Glenn Memorial Church on April 12 as part of Student Programming Council’s (SPC) Dooley’s Week.

Around 300 people filed into the church’s pews for the show, which Friedlander claimed had been approved by God and was therefore appropriate for the setting. Friedlander’s set, or lack thereof, consisted mainly of audience interaction, which participants seemed to enjoy.

Friedlander started off by dryly commenting on the audience’s energy levels, noting that the first row was “excellent,” and the second row was “pretty good, but not as good as the first row.” Friedlander’s criticisms devolved into singling out Brandon Wood (18C), whose apparently dismal efforts as an audience member brought down those of the entire crowd as a whole.

Friedlander continued his set by building rapport with other audience members. He asked about participants’ majors, and then proceeded to analyze the implications of each major. To a participant majoring in English, Friedlander replied he thought she was fluent enough in the language. To another majoring in political science, he questioned the presence of scientific thought in politics by alluding to the lack of test tubes.

Friedlander then transitioned into his set-up for the remainder of the show: his declaration to run for the president of the United States. He invited audience members to ask him questions about his platform and candidacy, similar to his Netflix special, “America is the Greatest Country in the United States.” The audience shouted out various hot-button issues such as taxes, the legalization of marijuana and capitalism for the comedian to share his stance. In response to someone who inquired about the comedian’s stance on capital punishment, Friedlander declared his opposition to the practice, but sentenced the heckler to death the next morning for asking the question.

When probed about gun control, Friedlander pragmatically delineated that bullets, rather than guns, are actually the objects that cause harm to folks. Since fingers are what control the bullets, Friedlander asserted that the government should ban fingers, cleverly shifting the focus of the gun control debate from the actual guns to those involved. This way, senseless shootings could be prevented while second amendment rights would still be protected, the comedian said. This kind of absurd simplification of a complicated issue was an example of his enjoyable social commentary, and a demonstration of deft comedic skill.

Friedlander called for the implementation of what he called “mini vagina guns” in response to a query regarding abortion rights. He explained that these devices would prevent humans from killing babies, (since guns would be doing the actual killing), and that Americans would be in favor of this because it involves bearing arms. Audience members hooted in response to his crude demonstration of this innovation, a rare instance of physicality in a mostly stationary show. I found my mouth agape at Friedlander’s gun-mimicking fingers, directed upwards into his imaginary uterus.

Friedlander’s flippant style was reminiscent of a sarcastic uncle at a family dinner. This was an effective way for him to connect with a college audience, given the differences in age and appearance. Most of his jokes flipped familiar situations into absurd ones, a schtick that didn’t get old despite it’s increasing predictability. For example, when describing his first paid job as a paperboy, Friedlander quipped that he made the neighborhood come to him rather than the other way around — his bike was a stationary one.

Oddly enough, the glorification of New York City was a prominent theme throughout the show. Friedlander spoke of the many years he spent there and shared various anecdotes, including a bizarre instance on the subway. Perhaps Friedlander should have focused more on Atlanta-based content instead of taking a question about the Metropolitan Transit Authority (MTA), New York City’s public transportation system.

Overall, Friedlander excelled in improvisation, which was crucial considering his entire show relied on audience participation. His quick-witted riffing touched subjects he was both well versed and ill-versed in, but he managed to relate his jokes back to Emory’s community and celebration of Dooley’s Week.