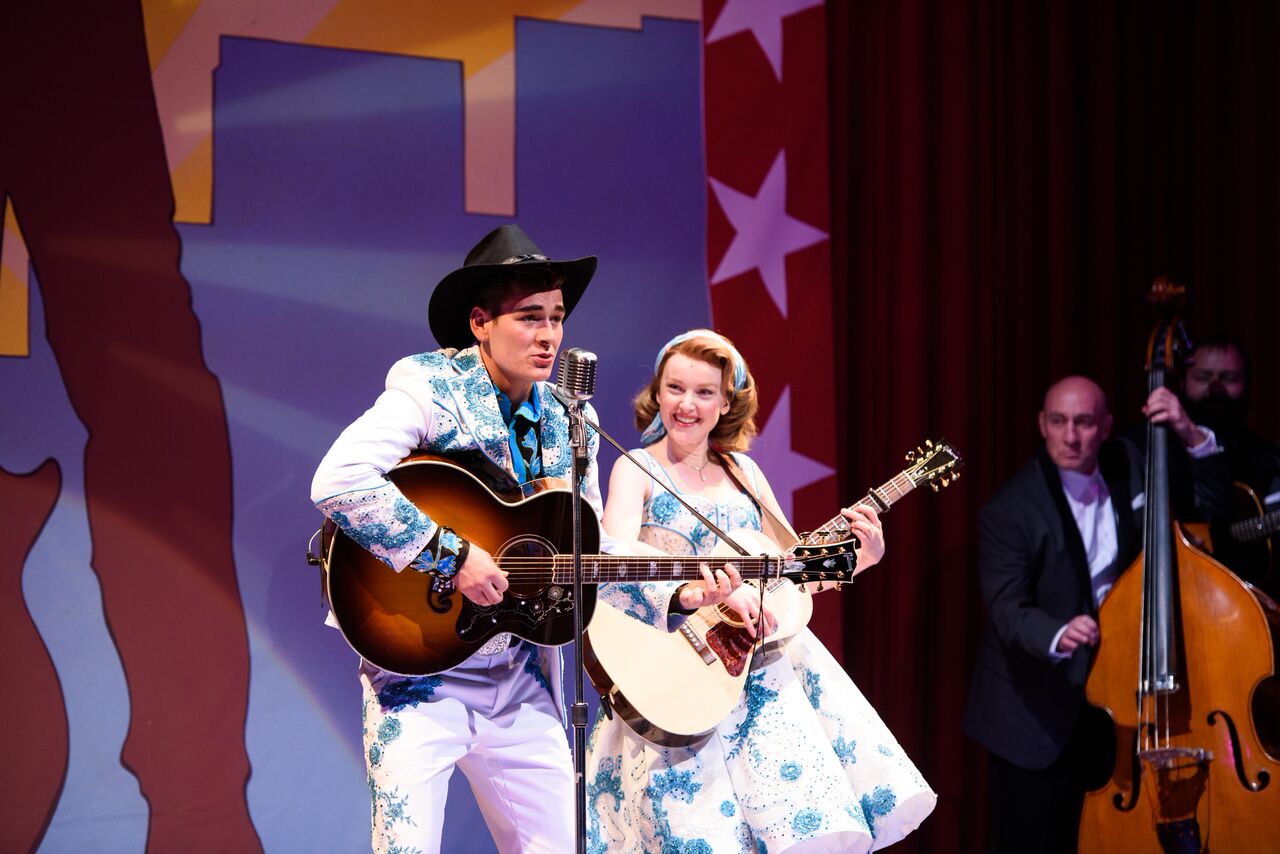 The idea of a musical threaded with country music does not scream success, yet I stand corrected. As it happens, the grounded country melodies blended with the story of finding your voice makes for a light and lovable adventure.

Breaking out the cowboy boots and country songs, Troubadour brings Nashville to Atlanta’s Alliance Theatre from Jan. 18 to  Feb. 12 for its world premiere. Its first showing has a surprisingly strong plot full of well-developed characters and a score that sticks with you long after the show.

While some might squirm at the thought of three hours of country music, composer and lyricist Kristian Bush wrote humbling songs that provide short breaks in Janece Shaffer’s hilarious and witty book. This team of Atlanta locals captures Nashville in 1951, inventing an original plot of a radio station’s singing contest and a tailor’s desire to fix up local singing stars in some glitzier costumes.

Joe Mason (Zach Seabaugh) grew up singing alongside his father Billy Mason (Radney Foster), Nashville’s beloved radio singer. However, Billy’s time in the spotlight is passing, and as Joe prepares to step into his father’s shoes, his relationship with his dad becomes increasingly tense. Seabaugh, whose looks have all the ladies in Nashville competing to be his singing partner, brings a delightful hesitancy to his character, who is unsure of his path.

When a singing contest’s reward is found to be singing alongside the handsome Joe Mason, Inez (Sylvie Davidson) from Tuscaloosa tries to showcase her songs. Davidson brings a pure, youthful voice the authenticity of being a true Nashville songwriter to her role. Yet Inez is not the only woman who comes running. Ludee Feeback (Bethany Anne Lind), an off-putting, tone-deaf and flimsy woman craves the opportunity to be Joe’s partner in every sense of the term. Lind embodies Ludee’s character with the sassy and biting persona quite well, but unfortunately she leaves some loose ends that need tying up for future elaborations of this production.

As the plot unfolds, it introduces the unexpected debut of Izzy (Andrew Benator), a Russian tailor itching to get his hands on Joe Mason’s wardrobe and invent radically new, bedazzled costumes. The costumes, created by Lex Liang for the show, range from everyday attire to the obnoxious “Leprechaun” suit and firetruck-red dress, which  perfectly represent the characters’ embrace of new style throughout the show. Benator steals the show in his phenomenal portrayal of Izzy. He embraces this quirky character  and delivers every line with passion — the audience gets genuinely excited every time he enters the stage.

The characters all grapple for their position in the musical world, their plots intertwining. Once the primary conflict of the father-son relationship is exposed, however, it could do more to pick up the pace or heighten the stakes. Act 2 drags slightly and while the songs are delightful additions to the plot, they do little to further it. The musicians’ storyline makes the musical seem somewhat more realistic. Nevertheless, the addition of some lengthier songs that urge the plot forward would greatly benefit the show.

An exceptional set design by Todd Rosenthal guides the audience through constant set transformations. Both sides of the stage depict the recording studio where the onstage band plays live music, while in the center stands a turntable which rotates to show the different settings of the studio, a dressing room and Izzy’s makeshift apartment in the back of a gas station. This shifting set makes every new scene feel fresher.

In totality the show is a “pick-me-up” the tailor drives home with a dumbfoundingly silly song “God Made Rhinestones.” As Susan Booth, director of Troubadour and Artistic Director of The Alliance Theatre, said at the beginning of the production, “You’re gonna have a large time,” — and that you will.