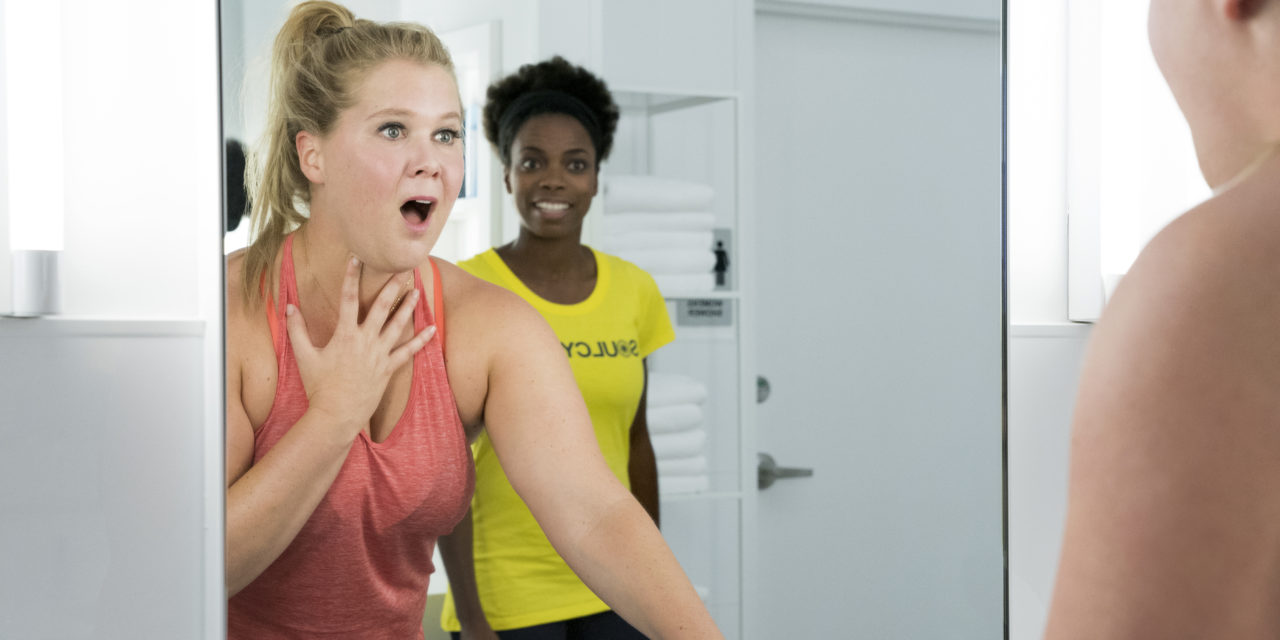 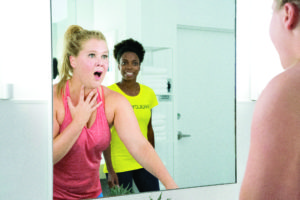 You look in the mirror, but you don’t like what you see. You scroll through Instagram, but all you see are people whom you long to look like. You have devoted friends and a steady job, but you feel like that isn’t enough.

People often endure insecurity, feeling vulnerable and invisible. However, it’s important to embrace who you are. This is the message of Amy Schumer’s latest comedy, “I Feel Pretty,” which follows troubled and self-conscious Renee Bennett (Schumer). Renee hits her head one day falling off a SoulCycle and suddenly believes she is a supermodel. With this newfound assurance, Renee begins a relationship with the eccentric Ethan (Rory Scovel), strains her relationships with best friends Vivian and Jane (Aidy Bryant and Busy Philipps) and pursues a new job in the fashion industry working under Avery LeClaire (Michelle Williams).

The Wheel, along with three other news outlets, participated in a roundtable interview with Schumer on April 2 to discuss her protagonist, co-stars and the movie’s message. “I Feel Pretty” is set to be released on April 20.

Mike McKinney, WUPA-TV (CW): What attracted you to this role?

Amy Schumer: The message of this movie. I was supposed to make another movie with the same message, but it didn’t work out. I got this script, and right away this was everything I had been wanting to say.

Xaviera Bryant, IceCreamConvos: As a woman, [this film] resonated with me on so many different levels from wanting to feel pretty to the confidence [of Renee]. Making the film, what stuck with you the most in portraying Renee’s character?

AS: I really related to [Renee] across the board. I have had moments of complete lack of self-esteem, and I’ve had moments where my confidence has been too much. I really felt her, and I think anybody can relate. It’s a constant battle to feel good about yourself and not let other people’s [comments] be who you are, because [they] really have nothing to do with it. It starts when we’re young, when people bully you and get in your head, and then at a certain point hopefully you realize that that’s not who [you are].

Anand Chaturvedi, The Technique: What’s a difference between you and Renee?

AS: I can relate to every part of Renee at different points in my life, but a couple years ago I made the realization to stop apologizing so much. I [used to] bookend sentences with “sorry” and then say my idea. I started to pay attention to that [mannerism], and I’ve stopped. I can’t really relate to her lack of wanting to use her voice and speak up — I haven’t felt that way for years.

Jesse Weiner, The Emory Wheel: The film puts an emphasis on sisterhood and friendship. What was your relationship like with your co-stars?

AS: Aidy [Bryant] is one of my best friends, but all of the women on set were very cool — [there was] no drama. There was definitely a feeling of sisterhood with the extras, too. There were a lot of girls who had to wear heels for a lot of hours, and we tried to keep each other encouraged and going.

Technique: This movie may seem like it’s geared to a particular demographic, but when I saw it there was a lot for me to relate to. What are some parts of the movie that can appeal to everyone?

AS: The whole message of the movie is universal to men as well. The male character, Rory, is not the typical masculine bro. He’s a more gentle dude, and I think a lot of guys can relate to him.

Wheel: Was it difficult to completely shift gears and play two versions of the same character?

AS: No, actually, it wasn’t difficult. I would think it would be, but we’re all ready to be shattered at any time, so to switch from “you hate yourself” to listening to some Beyonce and feeling the other way [isn’t hard]. It was fun to do both those things and not be one-note for the whole [film].

Technique: Do you think self-acceptance is something that comes immediately, or is it a journey?

AS: It’s a journey to get to that good level where you understand that your self-worth is not determined by anyone else but yourself. You get to the place where you realize where your self-worth actually comes from, but I think maintaining that is a life-long journey.

Wheel: What do you think college students can get from this film?

AS: I hope it reminds them of what makes them feel good. In high school, you feel really good and you know who you are, but then you’re ripped out of there and you’re in this new environment where no one knows you. In college, I realized I was hanging out with people I didn’t even like and who didn’t make me feel good about myself. Make sure that the people that you spend time with lift you up, and it’s not about looking in the mirror — it’s about doing things that make you feel good.

WUPA-TV: This film reminded me of some of ‘80s rom-coms, and I loved the “Big” reference. What are your favorite rom-coms?

AS: I loved [“Seems Like Old Times”] with Goldie [Hawn] and Chevy Chase. I loved “How to Lose a Guy in Ten Days” — that really made me laugh. I also liked “When Harry Met Sally” and other rom-coms with a message that examine human relationships.