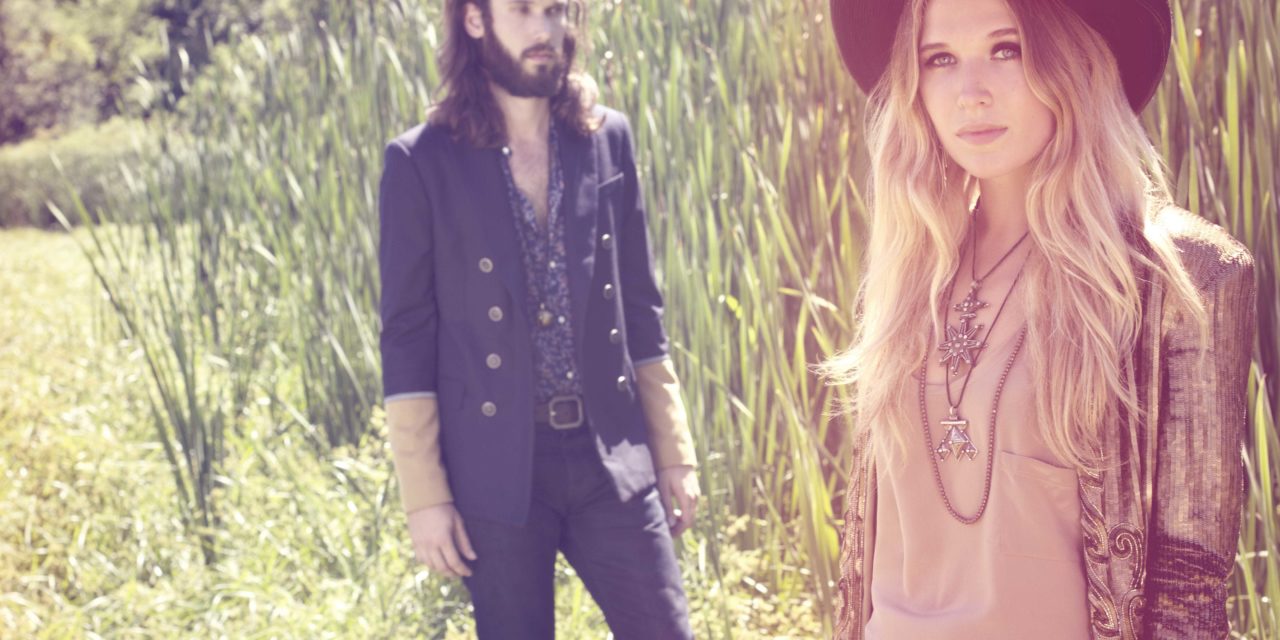 When lead singer and co-collaborator of Wild Belle, Natalie Bergman, was writing the song “Throw Down Your Guns,” she was in a state of turmoil. But a move to Los Angeles. and a serendipitous dinner with Jimmy Fallon offered Bergman the emotional rejuvenation and newfound opportunity she needed.

Her decision to seek a new life in the entertainment hotspot allowed her voice and bubbly personality to be discovered. Bergman could finally prove to the world that she could make it in the big leagues of entertainment, and, with the help of her brother, a music duo that would shock the industry was formed.

Though there is an eight year age gap between siblings Elliot and Natalie Bergman, they embarked on a musical journey together as equals. Raised in a musically-inclined household in Chicago, the two were inspired by a multitude of genres including reggae, ska and hip-hop from an early age.

Formed in 2011, the duo, called Wild Belle, has been featured in television show Grey’s Anatomy and the film Pitch Perfect. In addition, they have collaborated with big names such as Diplo and his electronic music group Major Lazer.

Wild Belle performed May 4 in Atlanta at The Earl. The Emory Wheel talked with Wild Belle’s lead singer Natalie Bergman about song inspiration, her creative process and the evolution of the band’s latest album, Dreamland.

Ilana Berghash, The Emory Wheel: Hello! What’s going on with you at the moment?

Natalie Bergman: I’m in L.A. I just got back last night. I’m writing thank you letters to everybody in my band and everybody [who] was there when we played The Tonight Show Starring Jimmy Fallon a few days ago.

Maya Nair, The Emory Wheel: How was that?

NB: It was such an amazing day in my life. My family was there, all of the wonderful people in my band were there, my brother drove our sound system, our lights and all of our gear from Chicago to New York just to play one gig. And Fallon, he’s the coolest guy. He’s the best.

EW: [Fallon] said you met him in Jamaica. Could you tell us more about that?

NB: [Fallon] forgot to mention that he jumped on my table before I even met him. He jumped on my table while I was eating dinner with a boombox, and he started singing a Michael Jackson song. Then he just went on with his night. An hour later, we had shots of tequila at the bar. He was curious. He was like, “Okay, who’s this girl? Who’s her brother? What’s going on with their world?” I never said this on the television show, but he wanted me to sing a song one night. Then I sang this Bob Marley song, and he sort of fell in love with my voice. He was like, “How can I get ahold of your music?” And I emailed him a track off of [the new album] Dreamland, and he wrote back immediately. He said, “Fantastic! I love it! Do you want to come on The Tonight Show?” And I was so excited.

EW: You performed “Throw Down Your Guns” on The Tonight Show Starring Jimmy Fallon.  Judging from the lyrics, the song has a personal feel, but also a political one. What were your thoughts when you were creating that song?

NB: When I was writing it, I was just coming out of this sort of slump [that] I was in. I felt like I had been lost at sea. I was in the doldrums for months and months — in the middle of making Dreamlands, actually. It was before I moved to L.A. I was in Chicago, and it was the dead of winter. My boyfriend had just left me. I couldn’t even pay my electric bill — my electricity went out at one point. I borrowed electricity from my neighbor’s, Nigel, apartment, who’s an extraordinary punk rock, hip-hop artist from Chicago. I bought an extension cable from Home Depot and wired it to his apartment for [the] three months I was wallowing in this depression. I became addicted to that sadness. I was living in somewhat of a drug den, and I couldn’t get out. I would show up to the studio some days, and [my brother] Elliot would send me home because I wasn’t [able to function]. I was like, “I need to get out of this city. It’s polluting my brain and polluting my soul. I’m not really doing any better.” So I just left — this is over a year ago. I moved to L.A.

When I started writing [“Throw Down Your Guns”], it was like, “At last I am alive again, and I’m not just dying by myself in this sorrow.” It was such a shame. It’s such a joy to be alive and be present. And when I moved to L.A., I felt like that’s what I became. The mind is a living thing, and you should have the guts to let your dreams flow. Your brain is alive, and I wasn’t giving my brain what it needed for months and months. And I said, “Okay, that’s it. I surrender. I’m going to surrender to my happiness. I’m going to surrender to being alive again, and I’m going to stop fucking around, and I’m going to man up and start being courageous, bold and daring and write a kick-ass song that says, ‘Throw down your guns in the name of love. I put my hands up.’”

When I went back to Chicago, we were making a music video for “Giving Up On You.” We really wanted to have this one love punk rock peace party. And you know what? Songs about peace have always bored me, to be honest. I don’t like political songs. Even though all art is political, I don’t identify with these political songs. But then, I was home, and there’s been so much gun violence and gang violence and police brutality and all of this bullshit. So now everybody’s afraid of the cops. They make everyone uncomfortable. You can say it again and again, tried and true: Fuck the police. They’re terrorizing the city of Chicago, and they killed the kid that lives across the street from my brother. [He was shot] in the head just because they were afraid, [because] the police are [cowards]. We were affected by this [event], and it didn’t feel good. It was just fucked up.

EW: Could you tell us about Dreamland, where the title came from and the process behind making it?

NB: This album is an evolution of myself. It’s an evolution sonically, emotionally and lyrically. I tried new things, and I tried things that made me uncomfortable. I worked with producers who kicked me out of their studios, and I fought with them and cried with them and laughed with them. The making of this record has been such an experience on so many different levels. I’ve learned so much about how to make a record with other people and how to listen to other people’s ideas and how to respect musicians and get inside of their heads and learn about their brains. Any room you go in with anybody, whoever they are, you can learn something about yourself, and you can learn something about them. A collaboration is such an amazing thing if you’re open to it.

We worked with Doc McKinney, who’s one of my favorite artists. He’s from Toronto. He’s done a lot of work with hip-hop. He is truly a beautiful mind, and he’s one of my close friends. I’m so thankful to have gotten to work with him. He really showed me what it was to use my voice as an instrument and stop covering it up with double vocal tracks. He really sort of put me in this vulnerable position where I was afraid. That’s what I learned most about making this record — that doing dangerous things and experimenting with new sounds and going places you’re not very comfortable with is the most gratifying and rewarding thing that you can do.

When we recorded “Giving Up On You,” I was channeling David Bowie. I was also listening to a lot of post-punk music, like ESG. We were in the studio with Dave Sitek from TV On The Radio, who’s a brilliant man. And he’s a punk. He’s punk rock. He’s a maniac, and when you go in the studio, it’s electrifying being in a room with him. He’s just like, “Give it something different. Try something different.” I just went into this character. I felt like I was actually channeling a man, and I felt androgynous. That was terrifying for me, because it didn’t sound like my voice, but it was completely coming from me — so of course it’s my voice. I can change my voice. I can become whatever I want, I’ve learned. Even if the fans don’t love the new sound, at least I’m doing something daring and experimental.

I was reading this article on Can, a German experimental band from the ‘70s. They refused to go into rehearsal. They would just record all their records — it was completely improvised. The lead singer spoke Japanese, and he could barely speak English, so you couldn’t understand what he was saying. The music is frantic and psychedelic. But it’s amazing, and they were really courageous to do what they did because they just didn’t give a fuck. They didn’t care what the masses thought about them. They were completely devoted to making something that was unusual, unique and to their liking — and that’s what I made. I made a record that I love, and I can only hope that other people love it, too.

EW: If someone who has never listened to your music before could only listen to one song, which song would you pick and why?

NB: Honestly, I love “Losing You” because it’s got a real classic soul chorus inspired by the young Michael Jackson and some other soul artists that I grew up listening to. The verses are like “Rude Boy” verses, and I think that’s part of the combination of my sound. Sonically, I’m doing a lot of different things, and I do focus on the instrumentation so much. So on the verses, I wanted it to be tribal sounding and organic and earthy. So, I made this cool, tribal track. Then on the chorus, it sort of hits a home run, and I’m wailing and pleading and begging — there’s a lot of begging on this album.