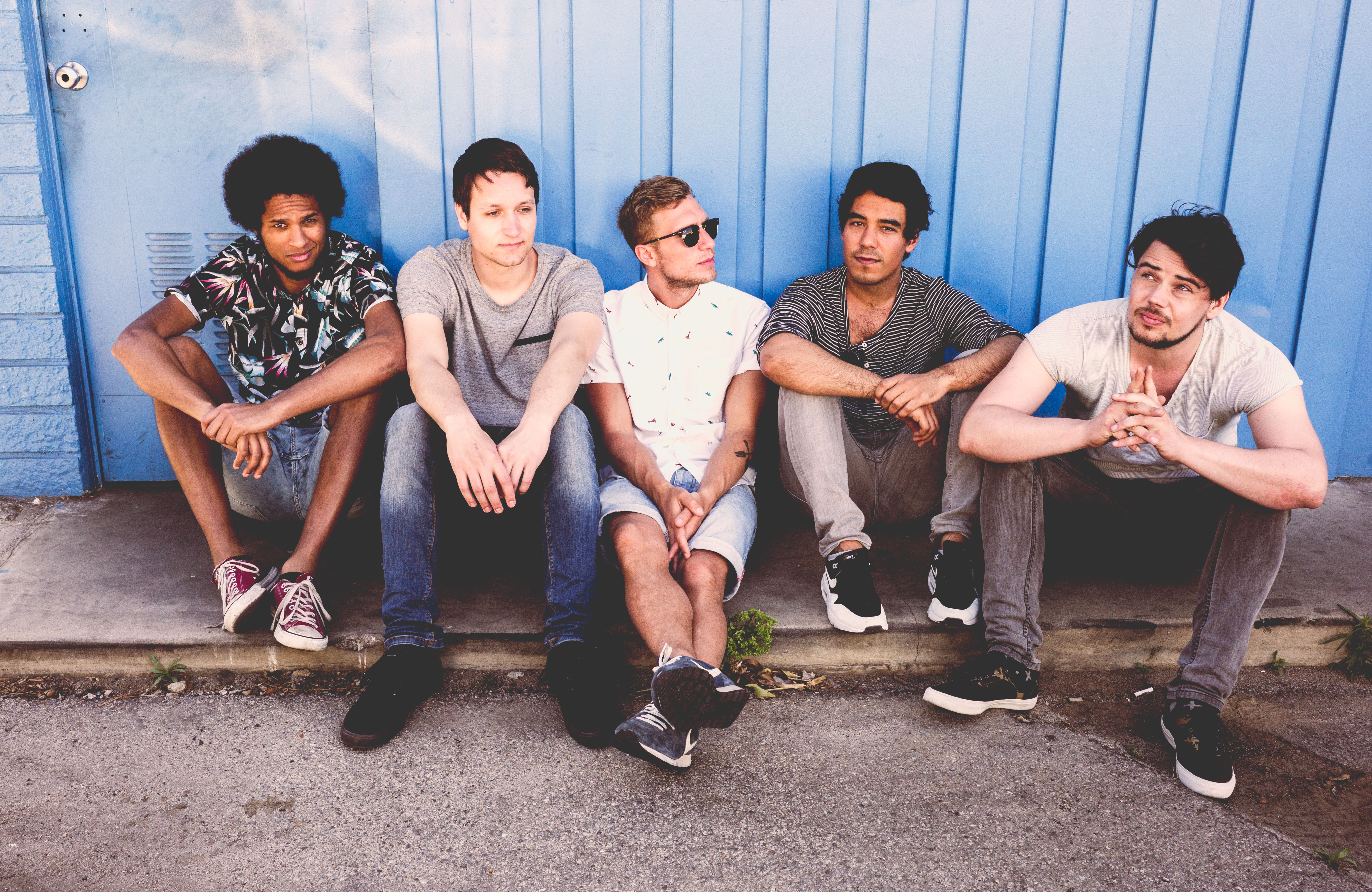 The Netherlands has produced some of the biggest names in music, including Edward and Alex Van Halen and Afrojack. Yet the small European nation’s music scene largely remains a mystery to Americans. The Dutch band Chef’Special is sure to intrigue new American fans with their noteworthy name and new sound while they break into America’s music scene, a seemingly daunting pursuit that the five-member group is greeting with optimism and excitement.

Beginning as a jam band that experimented with song structure and genres like reggae, hip-hop and funk in Haarlem, a historical city outside of Amsterdam, Chef’Special gained momentum in January 2014 across Europe with their sophomore album Passing Through, which went  gold in the Netherlands. Their success grew as they made their U.S. debut with a self-titled EP released in June 2015 under the record label Fueled By Ramen and they even charted on American Billboard Rock Charts with their single “In Your Arms.”

The Emory Wheel spoke with lead singer Joshua Nolet and bassist Jan Derks over the phone about the band’s formation, gaining new fans in the U.S. and their upcoming tour. Chef’Special will open for fellow Fueled by Ramen band, Twenty One Pilots, on the North American Emotional Roadshow World Tour this summer and will perform in Duluth Aug. 6 at the Infinite Energy Center.

Maya Nair, The Emory Wheel: Could you tell us about your sound and how Chef’Special started?

Joshua Nolet: We started about seven, eight years ago. We started out as a groove, jam band because we didn’t have any songs. We did mostly hip-hop and funk. I was inspired by a band from Haarlem called Relax, and they were doing hip-hop with a whole live band. I was also into The Roots and Questlove. I loved the way hip-hop could be brought to life with real instruments. I was fascinated. So we started as a hip-hop band, but everybody had their own influences. We’re really democratic. We’re five dudes, and we all need to be able to put some piece of ourselves into the music and not just be session musicians. It’s better to be in it for the long run and [have everybody be] happy. So now we mix reggae, hip-hop, pop, rock is in there. “In Your Arms” is folky, like a pop-folk song.

Jan Derks: Nowadays, we go all over the place, whereas in the beginning, we would do a groove or jam, and [we] would rock out like the [Red Hot] Chili Peppers. But it would always be mainly rap and beats. We were curious about all the opportunities we had. We just started to try more and more different [musical and songwriting] styles. Eventually, writing a song like “In Your Arms” is something that, [if] you compare it to what we were doing in the beginning, [makes] a world of difference. But nowadays, we feel like if we do it, it’s probably Chef’Special.

JN: We keep testing the boundaries. I was just saying this to someone else: every time we’re writing a new song, at the end of it, we’re looking at each other and saying, “Is this still Chef’Special or something else entirely?” And then we’re like, “Nah, man. This is Chef’Special, too. Like, we love this, right, so why not?”

Ilana Berghash, The Emory Wheel: How did the name “Chef’Special” come about?

JN: We were together for about a month already and still didn’t have a name. We had some name but we were unhappy with it, or we found out some other band already had that name. I said to the guys, “We’re going to this restaurant. We’re going to eat some good food, and we’re not gonna leave the restaurant until we have a good name. All of a sudden, this really pretty waitress walks up with a sign with all the specialties of today. She ended with, “And the chef special of tonight…” I don’t really remember what it was. But by then, we were destined to be called Chef’Special. We were exhausted by the process [of picking a new name], so we named ourselves Chef’Special, and we thought, “Let’s start making music again.”

MN: You have a large following in the Netherlands. What does it feel like starting over here in the U.S.?

JD: I find it really energizing. When we went on our first tour in the U.S., nobody knew us, and it felt like our early days starting out here [in the Netherlands]. It felt like a challenge and gave us a lot of energy to go for it full force and see if we could reach the [American] people. If we could get everyone jumping and sweaty and stuff while they don’t even know [us], it’s very satisfying. I was surprised by how [much] people liked our music and how well they responded — very enthusiastically.

JN: I also think that’s a difference between a Dutch crowd and an American crowd. We had good training here in Holland because we always hear from other artists [who] come to Holland. They’re always like, “Holland is a tough crowd.” [Dutch crowds] always wait until five songs [into the set] until they think, “Okay, we like this.” They don’t share that much. Americans are like, “Oh, this is great.” Then they’ll show you. They’ll be like, “Yeah you’re great!” But it was refreshing. It felt easy and fun, and I thought it would be more of a challenge to get people going.

JD: I think [being on] the road was a bit of a challenge here and there.

JN: But we played in Atlanta at the Buckhead Theater with a band called Aer. That show was awesome. Those people had never seen us before, and we played for 40 to45 minutes, and the house was on fire. It was great. So now we’re feeling really lucky with the American crowds.

IB: What about “In Your Arms” made it such a hit?

JN: It’s a song that connects or has a vibe that resonates with a lot of people. To me, it’s a very personal song. It’s a song [that] I wrote for my dad who passed away. But it’s written in a way that could basically be about anything. It could be a love song or [be about] someone you lost. In that way, it’s relatable. It’s always easier when it’s real. When it’s a real emotion or feeling, it’s always easier to write, and I think it connects easier, too.

MN: What is the difference between the Shot In The Dark EP and your self-titled EP, and why did you decide to only put the self-titled EP on Spotify?

JN: We released a lot of music here in Holland. We wanted to start with the [self-titled] EP that we released as kind of a teaser. We wanted to come in fresh in the States because we’re working on an album right now. We’re going to start recording this week [of April 11], actually. We’re going to release that this summer — probably the end of this summer. We wanted to have a cohesive sound to start off with. I’m sure there’s going to be a point when we release everything at the same time. But we thought maybe that would be distracting. We just want to focus on the new album, and we hope it’s going to be [full of] the best songs we’ve made up to this point.

JD: It was just a good, solid start with the stuff that we feel is the best we have now, and from there we’ll see how we can release anything else.

MN: If somebody who has never listened to your music could only listen to one song, which song would you pick and why?

JD: That’s hard because all our songs are very different. We’re genre-crossing the whole time. If you ask me 10 minutes from now, I’d probably say a different song. But if I had to pick one off the top of my head, I’d say “Peculiar” is a good example of the more energetic side to what we try to bring to the live shows. We build upon those types of grooves that you hear in that song, and we try to make them huge and make them explosive in a live setting.

IB: How do you feel about touring with Twenty One Pilots and playing [for] such a loyal fanbase?

JN: That is such a great opportunity for us to show ourselves in a live situation for a lot of different people. We love to do live shows, and we think that the only real way to get real fans is to play for them and to convince them live and get to know them and make sure they come back and remember you. Radio is obviously a cool thing, but it’s also a fleeting thing.

JD: If your song does well on the radio, people like the song, but they don’t necessarily like the band. You [have to] find another way to reach people.

JN: We were jumping up and down in the studio when we got the news [about going on this tour]. It’s just great. And [Twenty One Pilots] is a great live band.

JN: It also feels a little bit like cheating or taking a shortcut.

IB: But you worked hard.

JN: Yeah, but [Twenty One Pilots] saw us two or three years ago when we were doing a big festival in Holland called Pinkpop [Festival].

JD: They played right after our set.

JN: I think that’s one of the reasons why they decided to get us on the tour. It’s also those little coincidences that make stuff like that happen. We’re very blessed.

Correction (8/10 at 7:12 p.m.): The people in the originally published photo are not members of Chef’Special. The photo has been replaced to show the members of the band.