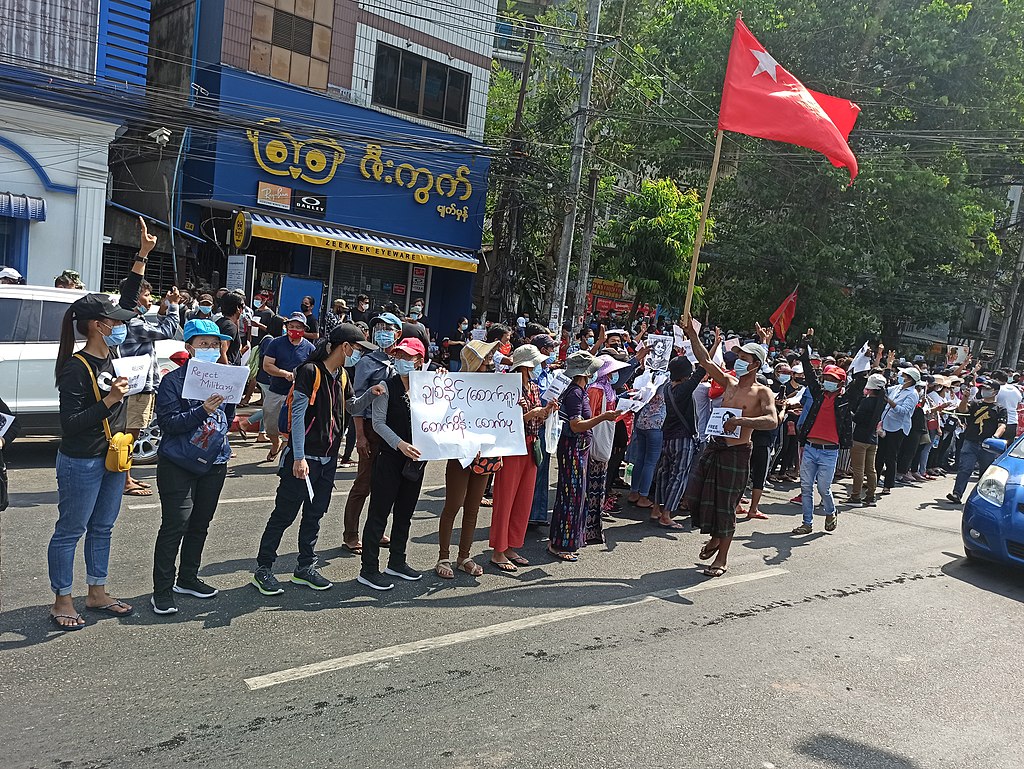 Anti-coup protest near the University of Yangon, Myanmar. (Wikimedia Commons)

In the weeks since the coup, Suu Kyi, other politicians of her party and scores of Burmese citizens have been detained in unknown locations. Security forces have murdered and tortured hundreds of protesters, many of them children. The crisis in Myanmar warrants not only greater international awareness, but also substantive retribution from the U.S. and its allies.

While Suu Kyi’s government was far from perfect, as it permitted the ongoing genocide of the country’s Rohingya minority, its fall to military rule has set a dangerous precedent. If the international community does not act, we remain complicit in the violence imposed on our international brethren seeking democracy. As Americans, we must commit to freedom and justice, not condone repression and violence. America’s history of violent imperialism makes this tricky, but our civilian power must be wielded. Only when we garner international support to respond in a meaningful way will we be able to call ourselves true advocates of democracy. This won’t absolve us of the imperialist atrocities that the U.S. has committed abroad, but it can create solidarity among civilians seeking freedom in spite of our national differences.

As the violence has raged, the U.S. government, which prides itself as a beacon of democracy, has not done enough. President Joe Biden has merely condemned the violence, demanding that the junta regime release its detainees and “demonstrate respect for the will of the people” expressed in the 2020 election. The U.S. has since suspended further trade deals with the Myanmar government and implemented economic sanctions that affect the military leadership and their families. Such efforts signal a willingness for the U.S. to do the bare minimum to support the protestors on the ground, despite claims the Biden administration would demand accountability from authoritarians.

Biden has made admirable statements, but he must go further. If he does, however, he should refrain from sanctions and suspending trade deals, which are ineffective for regime changes. Former President Barack Obama imposed sanctions following the outbreak of Syria’s civil war. Yet just over 10 years after the conflict began, U.S. sanctions have largely failed to change the Assad regime’s behavior and instead have harmed innocent civilians. Likewise, Biden’s effort to cut off further trade relations with Myanmar would do little to weaken the regime, as U.S. trade with the country barely totals $1.4 billion. In comparison, Myanmar’s trade with China is worth ten times that amount. Therefore, an international approach coupled with civilian solidarity would be more effective to shift the violent regime’s tactics in Myanmar.

Following former President Donald Trump’s contravention of American foreign policy norms, the U.S. faces several monumental tasks abroad, like rebuilding its alliances with European countries, countering Russia and China and stemming the flow of migrants from Central America. Because the U.S. is working with nations like Turkey, Pakistan and Saudi Arabia on counterinsurgency issues, humanitarian action may threaten our relationship with those that see democracy in Myanmar as a segue to eventually undermining their rule. However, if the U.S. is to truly champion democracy and liberty abroad, we must leverage our alliances with other democracies to fight authoritarianism.

Rather than rely on ineffective and performative responses, we must also commit to immediate support on the ground: Mutual Aid Myanmar is a fund designed to provide direct aid to those organizing and protesting against the military government. Additionally, as a global power, the U.S. can rally up international support through the United Nations and set the stage for solidarity and humanitarian aid from the international community.

But the government will likely not act unless it feels it has a reason to do so. We, as students, must give it one. Not by signing empty petitions, but instead by acknowledging the violence,  educating ourselves about global politics and power structures to make us better suited to take action. As future leaders, the onus is on us to understand a world beyond the U.S. In addition, the financially able among us should donate to the mutual aid groups supporting those Burmese fighting for justice. Instead of merely commenting on the crisis and pursuing sanctions, the U.S. government should garner global support or pressure the military government to stop killing its people.