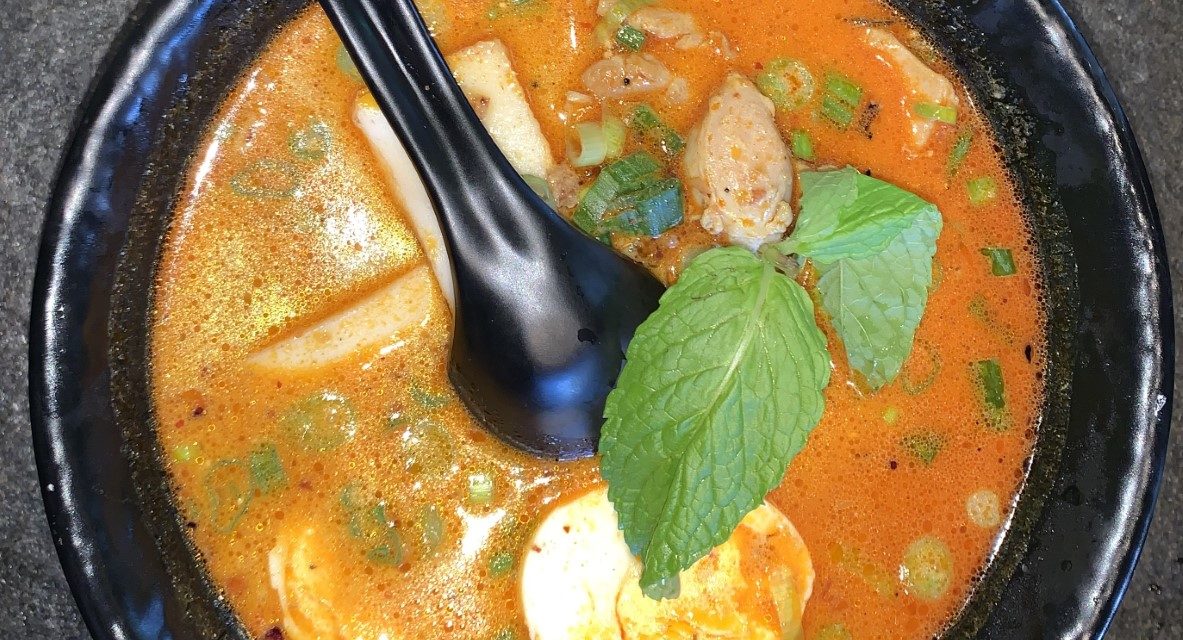 Located in the heart of the Georgia Institute of Technology neighborhood in West Midtown, Food Terminal opened its second location on Oct. 8. The Asian fusion restaurant puts a modern spin on Malaysian cuisine and other Asian food. Malaysian chefs Amy Wong, who sold street-style noodles from a kiosk in Malaysia at the age of 15, and her husband Howie Wong founded the restaurant along with popular bakery Sweet Hut Bakery & Cafe and Thai and Malaysian restaurant Top Spice.

The 52-page menu divided a plethora of choices for any dietary needs and taste preferences. Each page featured an intricate description of the dish paired with a photo, an eye-catching and interesting take on a menu. The staff was friendly and knowledgeable about the dishes and our meals only took about 10 to 15 minutes to arrive at the table.

My friend started with the Japanese sencha tea and described it as refreshing with strong vegetal flavors and accents of citrus. As a Briton, she prides herself on being acquainted with the best teas and gave Food Terminal’s offerings a strong approval.

As part of the grand opening special, the waitress served us free appetizers such as vegetable samosas and fried pork wontons. Since I don’t eat pork, the waitress was very considerate of my dietary needs, giving me extra samosas instead.

My friend noted the crispiness of the pork wontons, describing the meat as juicy and melting in the mouth. She especially enjoyed how the crunchy exterior both offset and complemented the soft meat. The flaky vegetable samosas were also delicious, filled with potatoes, carrots and peas and topped with cilantro for added freshness. Though I was initially hesitant to dip the pastry in the curry-based hot chili sauce because of my low spice-tolerance, the mildly spicy sauce added a whole new dimension of flavor.

Alongside our free appetizers, we ordered the $6.50 Chinese broccoli, a flat, blue-green leafed vegetable with thick stems. Despite its simplicity, the dish was well worth the low cost. Topped with sweet oyster sauce and fried onions, the broccoli was perfectly cooked — soft and fresh-tasting. 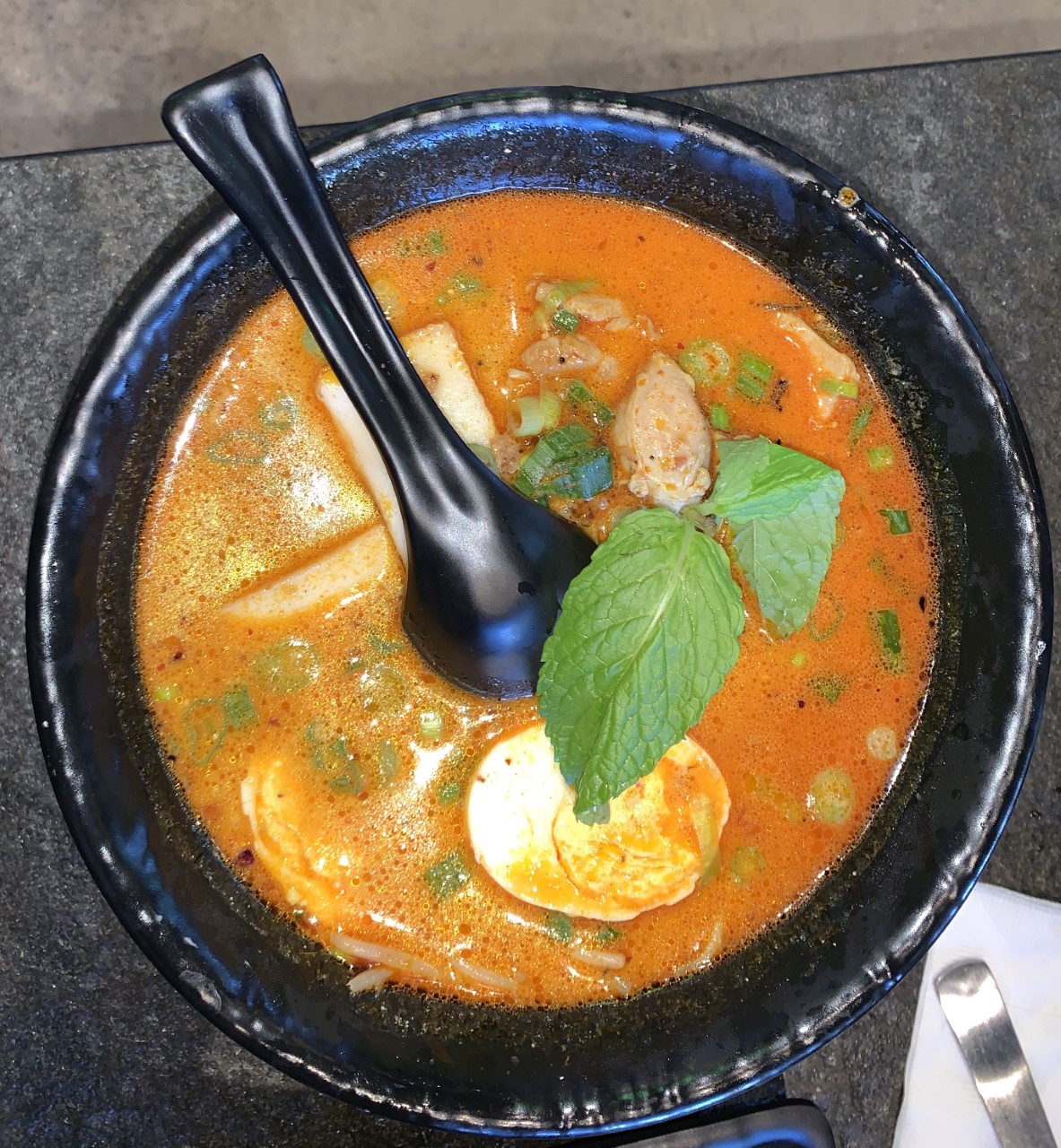 Food Terminal, which opened its second location on Oct. 8, puts a modern twist on Malaysian and other Asian cuisine./ Sadie Schwartz, Contributing Writer

A traditional Malaysian dish with a curry-soup base on a bed of Food Terminal’s signature thin yellow noodles, the curry laksa chicken was topped with boneless chicken thigh, fish cake, fried shallots and a hard-boiled egg. The exotic-tasting creamy broth used coconut milk, curry powder and chicken along with different types of cloves and mint leaves that left a slight tomato aftertaste. The dish was well-spiced with the curry base but did not overwhelm. The fish cakes tasted a little strange due to the potent fishy aftertaste. Still, they were redeemed by the delicateness of the hard-boiled egg and chicken.

An overall simpler plate that originated from a small Malaysian town called Ipoh, the Ipoh chicken and shrimp hor fun felt much lighter. The entree consisted of a chicken broth with shredded chicken, fresh shrimp, fish cakes and bean sprouts, topped with chives and fried shallots. Ultimately, it lacked flavor and could have done with a kick of spice or sweet seasoning.

For dessert, we ordered the sticky rice topped with thin slices of perfectly ripe mango. The rice was quite sugary, but the garnished mint leaves added a burst of freshness to the otherwise overwhelmingly honeyed dessert. A coconut milk and sugar syrup also complemented the rice and mango exquisitely, making an otherwise simple dish taste like a saccharine dessert.

In total, we spent $46, a  reasonable price for the amount of food we ordered.

The modern interior of the restaurant matched the overall modern take on the dishes, and we were altogether impressed with the food and staff. Soft music enhanced the ambiance, contrasting with the upbeat environment. The dining area was a truly immersive experience with dark green and yellow mood lighting, while the bar gave off a striking aura with tall yellow stools, a clear marble table and yellow, green and blue lighting.

If Food Terminal was closer to Emory, I would certainly go more often and attempt to try every meal within the intricate 52-page menu. If you’re looking for trendy take on Asian cuisine with some Malaysian dishes you might not have tried before, consider heading to Food Terminal for a night out with your friends. 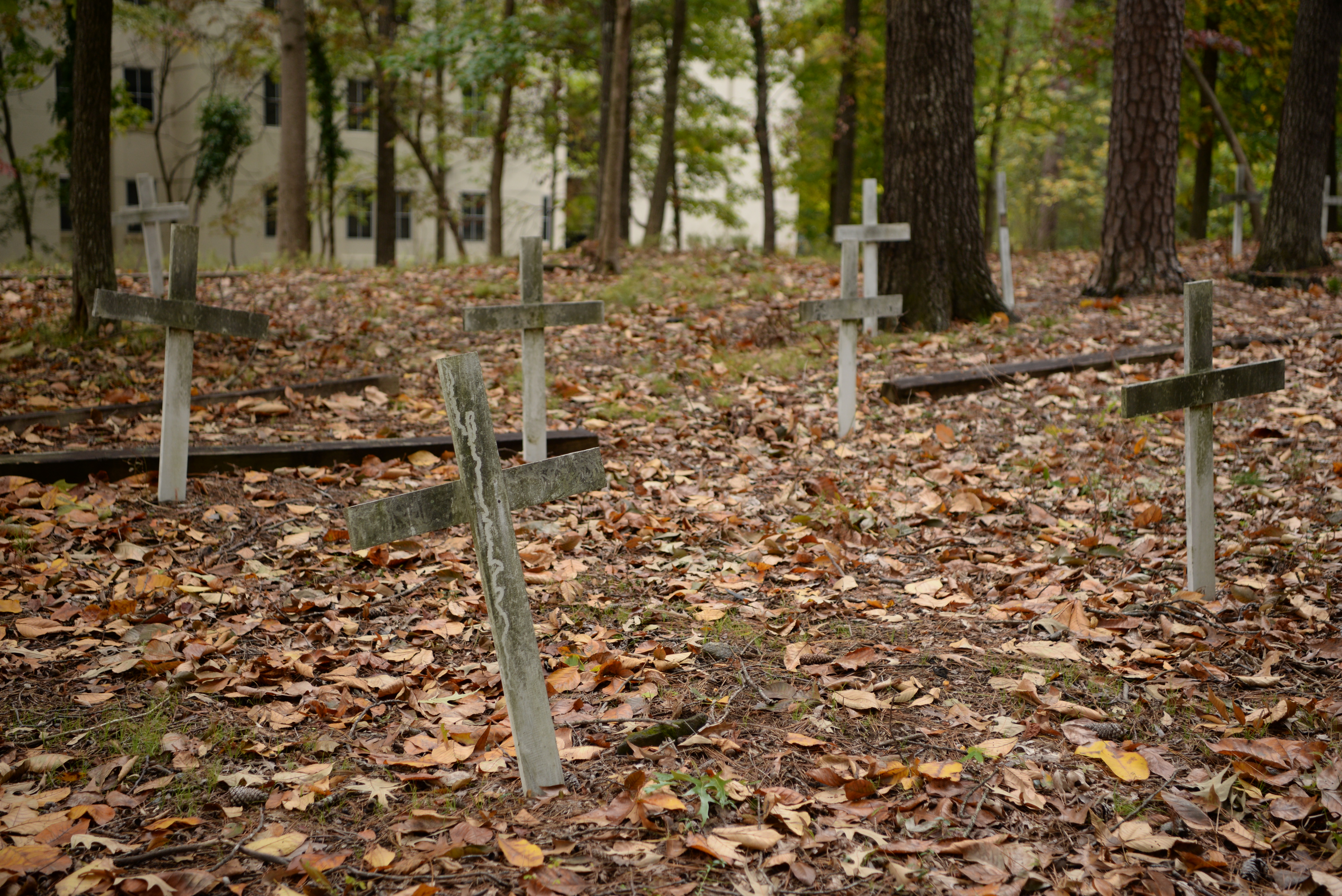