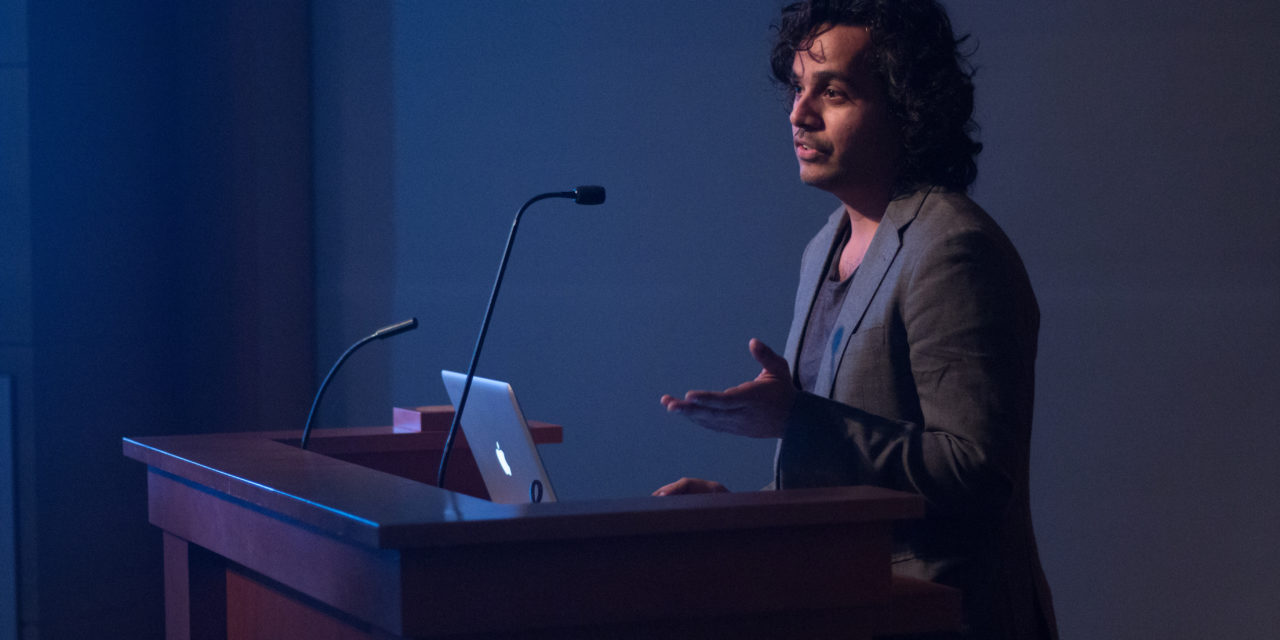 It was hard to miss contemporary street artist Abhishek Singh’s massive live painting, a form of performance art painted in the public sphere. On Jan. 14 and Jan. 17, Singh constructed a rendition of the elephant-headed Hindu deity Ganesha in the Emory Student Center. His residency at Emory’s Michael C. Carlos Museum was completed on Jan. 22, with a talk where Singh discussed his process and inspiration for his live artwork and the people he met along the way of his residency.

Born in Gwalior, India, Singh grew up surrounded by ancient Indian myths and folktales. At a young age, he often covered the walls of his family home with the white chalk he took from school. Singh studied animation film design at the National Institute of Design, and his work is now displayed at several venues including the Carlos Museum. He now splits his time between Brooklyn, N. Y. and Mumbai, India. A graphic novelist and artist, he is known for incorporating Indian mythology into his works while bridging the “temporal and sacred metaphysical.”

To a roomful of students, staff, professors and Atlanta residents, Singh noted how grateful he felt for the unique opportunity to take his work to Atlanta.

“This has been a fantastic … experience,” Singh said. ”Even though I’ve lived back and forth between New York and India, this is my first live painting here and I’m so happy that it’s based on stories of elephants and that interwoven relationship we have with Earth.”

Singh took advantage of painting in Atlanta and, during his talk, he presented several photos of his work on a large-scale live painting at the Atlanta BeltLine. The presentation also featured images of his journal, which holds artworks made in watercolors, alongside stories.

Singh explained that during his time in Atlanta, he encountered children to whom he taught Indian myths and folklore, eventually drawing creative inspiration from their conversations. Singh pointed out that the children’s questions often broached ideas that he would never have thought of himself. 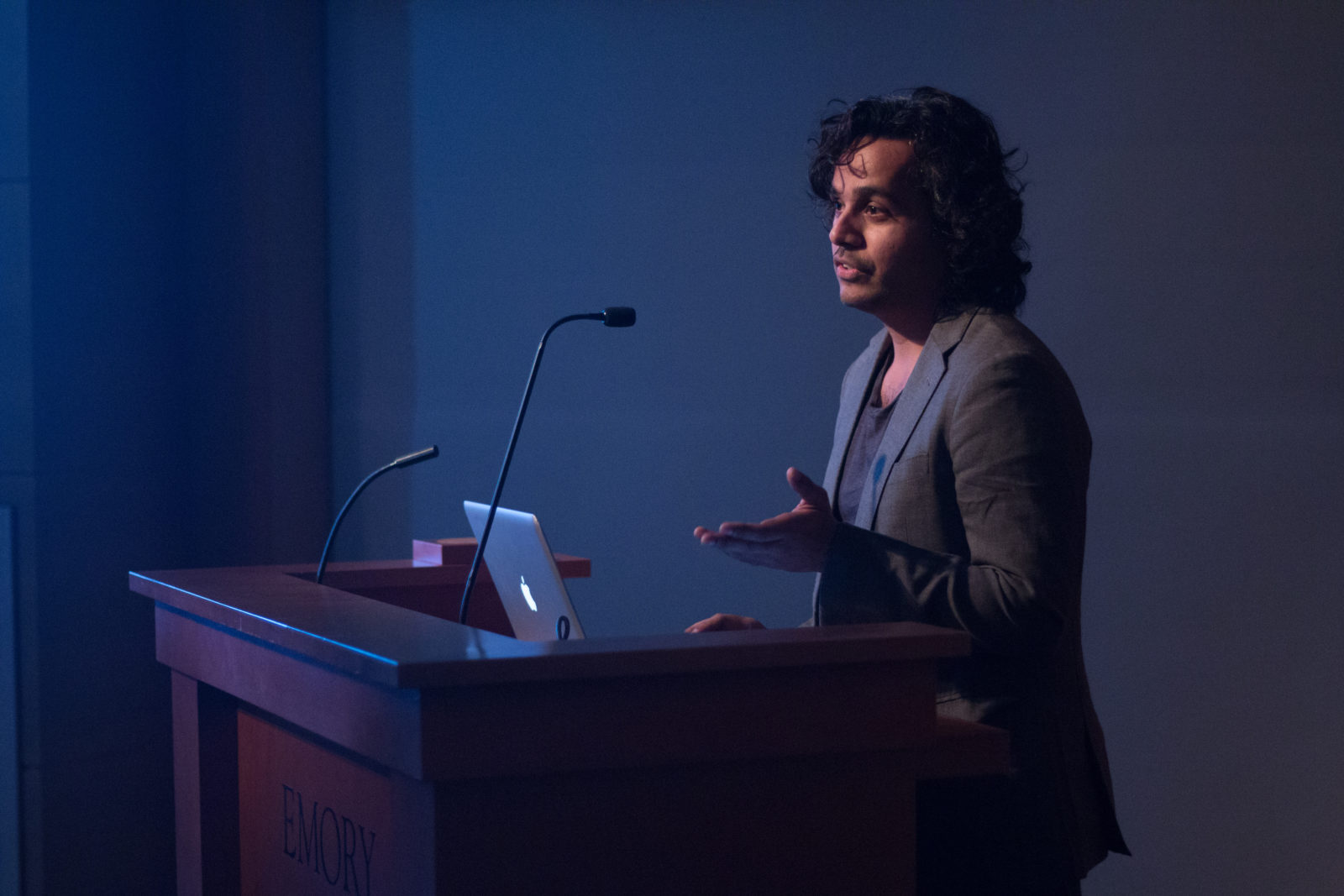 Artist Abhishek Singh finished his residency in Atlanta with a talk at the Michael C. Carlos Museum on Jan. 21. Singh discussed his live painting of Ganesha and inspiration for other artworks./Derrick Tran, Staff

“We’re talking about light and this little girl stands up and says, “You say light travels all the time, so does it get tired?”” Singh said. “It’ll only come from an untainted, unhindered mind like that. I was as fascinated as you guys by that question.”

Singh said he drew inspiration for his live painting from the many people he met in Atlanta throughout his week of residency. Thanking all the familiar faces in the crowd for the wisdom and love they shared with him, he noted that had tried his best to convey the many interactions he had had through his painting.

“I hope it lives up to that love, from my end, too,” Singh said.

Throughout his talk, Singh tied environmental symbolism ideas applicable to everyday life, using his live painting to portray elephants among billowing  trees and other animals living together in harmony,. He pointed to a golden egg located at the last panel of his painting as a means of inspiring people to be less wasteful and help combat global warming. His choice of the golden egg to represent this originates from a myth.

“There’s a mythological story you read that the whole universe was created from a golden egg, and when the universe was created, the shells of that golden egg were lying around outside,” Singh said. “Then people thought we should make something from these golden shells as well, you know, maybe that’s [saying we should] not waste things.”

Singh’s attempt to connect his art to the real world was met with great admiration from the audience.

Audience member Harriette Grissom appreciated Singh’s poetic explanations for why and how he chooses to connect nature, myth and humankind’s need for these two elements in the modern age.

In addition to painting, drawing, writing and creating content for his graphic novels, Singh makes time to retreat for treks in the Himalayas. Accompanied with photos of his journey in Atlanta, Singh included photos from his many travels to the Himalayas and journal entries about his travel experiences.

Singh shared photos of the animals he met in the Himalayan mountains with the audience. Many of these natural elements also serve as motifs in his paintings. He noted that he had often seen elephants in his dreams, but had not seen any before. Singh felt a higher spirit calling him to meet them in the mountains, he said.

Audience member Sonali Saindane was particularly intrigued by a drawing of two elephants in Singh’s sketchbook, based on his observations in the wild.

“The sketches and the watercolors — I loved those,” Saindane said. “I love the spontaneity.”

The end of Singh’s presentation was met with multiple rounds of applause.

Audience member Bhanu Prakash, who has been following Singh’s live paintings on Instagram, called the talk “brilliant” and noted that it was more philosophical than he expected.

“It was a lot more in-depth, and we can come back and look at the painting and take a lot more back [from his paintings],” Prakash said.

Singh ended his talk by expressing his desire to inspire the audience to explore new perspectives through nature and interactions with others.

“My intent, as a storyteller, is to build new narratives that may give us a different perspective,” Singh said. “To see our role as humanity on this living and organic planet. We are all journey people and I hope you get to meet the teachers you will be inspired by.” 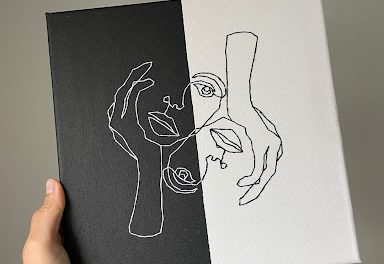 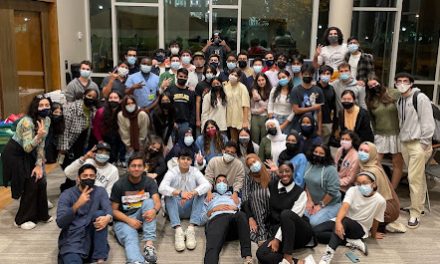