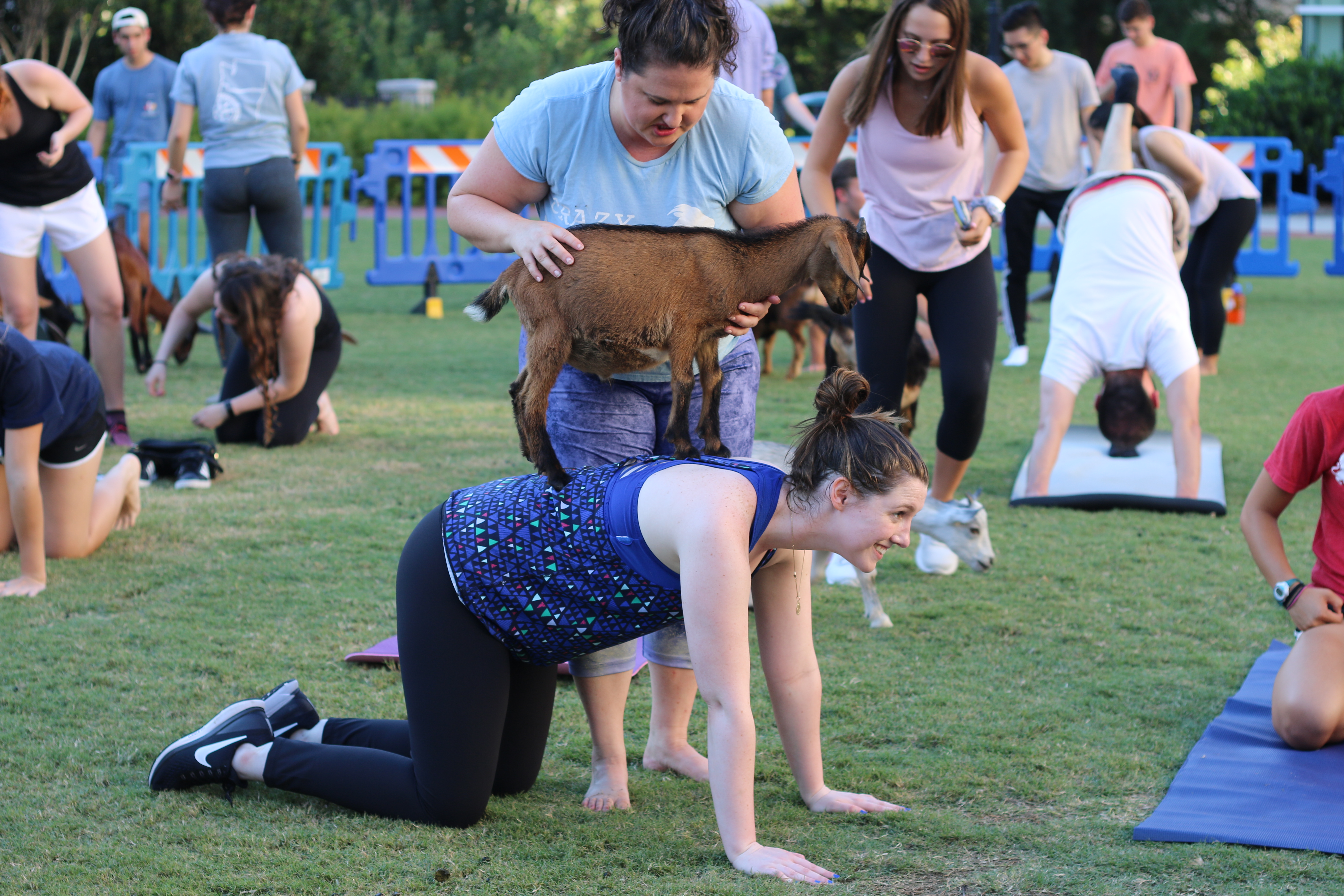 Vriksasana, or Tree Pose, is a balancing act in which yogis stand on one leg, their other foot resting lightly on their ankle. Transfixing their Drishti, or “Yogic Gaze,” onto a still object, the practitioner wobbles toward near stillness. Suddenly, a goat headbutts another, causing one to emit a sharp “bleat” in protest and Emory students practicing yoga have broken their Drishti.

Twelve goats traveled to Emory University on Friday, Aug. 31, for three separate sessions of goat yoga on the freshman quad.

Goat Yoga, a recent fitness craze in which participants perform yoga amidst goats, combines the relaxation of yoga with the purity of animals. The goats jumped on participants during Chakravakasana pose, licked their arms during downward dog and complicated the serenity of yoga with their cuteness.

Red Wagon Goats’ yoga typically costs $40 for one session and $20 for charity events. To make the event more accessible to students, Jordano worked with Red Wagon Goats to bring the price down to a little more than $15 per person. Tickets went on sale in early August.

“We wanted more than just having someone pass a table and [give] money,” Jordano said.

Obtaining permission to host the event was easier than Jordano expected, he said. Though goats have a reputation as landscape destroyers, they would rather eat ivy and vines than the grass on the James W. Wagner Quadrangle, or the freshman quad. After ensuring that the goats would be rented for yoga and not for their remediation services, Campus Life was “on board every step of the way” Jordano said.

The strategy worked well; crowds gathered around the quad to pet the goats and inquire about KA’s fundraiser. Participants appreciated the interactive fundraising event.

“They did something no one [on Emory’s campus had] done before,” Emily Beattie (21C) said. “That’ll really benefit their organization.”

The first session was supposed to begin at 6:30 p.m., but mechanical difficulties with Red Wagon’s truck delayed the start to 6:55 p.m.

Throughout each session, representatives from Red Wagon Goats recited beginner yoga instructions that the participants largely ignored whenever a goat wandered nearby. Each session lasted 45 minutes, with 30 minutes designated to yoga and an extra 15 to taking photos with and petting the goats.

The large barriers KA set up around the freshman quad proved insufficient in stopping some determined goats from sneaking out and attempting to explore Emory’s campus. The goats escaped their enclosure several times throughout the evening, at one point making it to all the way to Means Drive. Fortunately, the goats returned safely, following a large bowl of food.

Emma Davis (21C), who attended the third session of goat yoga, said she became interested in the event after seeing viral “videos of goat yoga.” She added that “the goats always look friendly.” Davis reported that the videos didn’t serve the goats justice. In addition to their cuteness, “[the goats were] very docile and friendly.”

Jordano said KA hopes to host a more “interactive” event for their national philanthropy, the Muscular Dystrophy Association (MDA), for which Self KAre raised a total of $895 dollars.

“The point of Greek life is giving back to the community,” KA President Connor Cione (19C) said. “That’s something KA embraces. We are excited to start doing more service.”

The event was a success, with the first session selling out completely. KA sold 100 tickets overall.

“This is a taste of what’s to come,” Cione said.