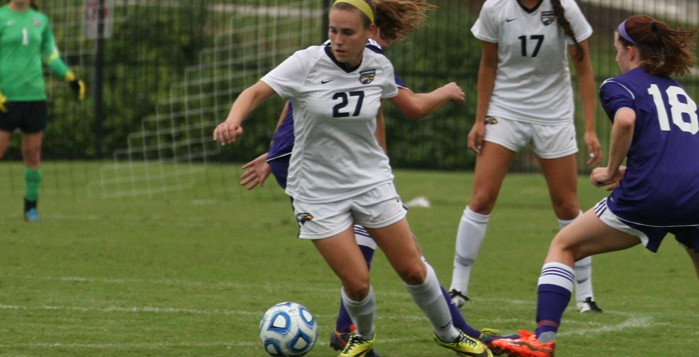 On Friday, the No. 9 Eagles traveled to New York to face the No. 23 NYU Violets. The two teams finished the game deadlocked in a 1-1 tie.

After 80 minutes of scoreless play, senior forward Emily Feldman stepped up. After an NYU player committed a foul against an Eagle just outside of the 18-yard box, Feldman took a free kick and drove the ball off the bottom of the cross bar and into the net.

This was the team-leading fifth goal of the season (and 25th career goal) for the senior, and it gave the Eagles a 1-0 lead.

However, the Violets were able to tie the game in the 86th minute. After the Eagles failed to properly clear the ball, NYU forward Melissa Menta drove the ball into the upper-right corner of the goal, knotting the score at 1-1.

Though the squads would play two overtime periods, the game would end with the score still tied.

The Eagles outpaced the Violets 7-5 in shots on goal, while junior goalkeeper Liz Arnold made three saves for the Eagles after playing for all 110 minutes.The Eagles made their way up to Massachusetts on Sunday to face the Brandeis Judges. This game also ended in a tie.

“There was a definite improvement from the NYU game to the Brandeis game,” Arnold said.

The Eagles struck first, scoring with 41.2 seconds left in the first half. Freshman midfielder Melissa Ardizzone crossed the ball to fellow freshman Melinda Altamore, who sent a high ball toward the net that just passed over the outstretched arms of Brandeis goalkeeper Michelle Savuto. This was Altamore’s first conference goal.

“It’s always a great feeling when you score, but scoring a goal against a conference opponent is a new experience,” Altamore said.

While the two teams played equally well throughout the majority of the second half, Brandeis senior Corinne Bortniker sent a ball forward to Brandeis junior Melissa Darling, who quickly popped the ball into the 6-yard box, from where freshman Samantha Schwartz chipped it into the net, equalizing the score 1-1.

The score remained tied as regulation time ended, and the two teams headed into overtime.

Emory controlled the bulk of the play in the overtime period, taking two shots on goal in the first 10 minutes.

“We hope to build on the positive atmosphere we have established, limit defensive breakdowns, finish our scoring opportunities and win our last five games in the regular season,” Arnold said.

The Eagles return to the pitch on tomorrow evening with a non-conference contest at LaGrange College (Ga.). ​