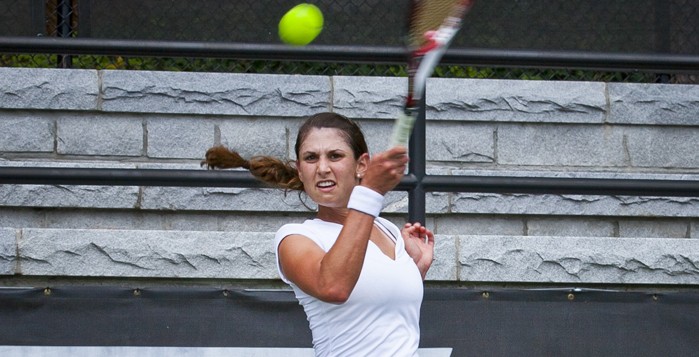 This past weekend, the women’s tennis squad traveled to Lawrenceville, Ga. to participate in the Grizzly Open.

Led by junior Marissa Levine and senior Danielle Truitt, the team had a successful weekend in the singles matches, winning both the B and C draws.

Levine dominated the competition, winning all five of her matches, en route to the B draw victory. She even beat a teammate, freshman Anna Fuhr, in the closing game of the tournament. With her win at the Open, Levine improved her record to 10-1 on the fall season in singles play, which was the best mark on the team.

Fuhr played well in the B tournament, winning her first four matches, before catching the unfortunate draw of facing her own teammate in the finals.

Truitt was more dominant in her play at the Grizzly Open. Playing in the C tournament, Truitt did not lose a single set, winning all five of her matches to win her draw. She finished the fall season with an impressive 6-1 singles record.

In doubles, Emory had a fairly successful run, led by Fuhr and sophomore Katarina Su, who made it to the semifinals, and junior Beatrice Rosen and sophomore Melissa Goodman, who advanced to the quarterfinals.

Head Coach Amy Bryant was pleased with her team’s play in the B and C draws, but said they could have prepared better for the A draw.

“I saw a lot of fight come from my teammates when they were in a tough match and they really stayed steady and stuck to their game,” Su wrote in an email to the Wheel.

This tournament marked the end of the squad’s fall campaign.

“Each player will set personal goals for themselves,” Bryant said. “I expect them to stay motivated and work to get better instead of coasting or going down a level in the off season.”

Rosen expressed great praise for the new members of the team, whom she said have quickly added an extra punch in the lineup.

“Our freshmen really proved to be great players and teammates both on and off the court, so I’m so excited to have them on the team and work with them more,” she wrote. “They all have great energy and are motivated, and push us returners.”

Su felt like the first half of the season prepared the team for the spring season.

“The fall season has allowed our team to get into the groove of things and get a routine going,” Su wrote.

Su is optimistic about the team’s potential and is looking forward to competing for the national championship in the spring.

“I think our team has a lot to improve on in order to get us fit and ready (both mentally and physically) to compete in the spring,” Su wrote. “I would like to see our team pick up the intensity and focus on [the] court for the spring.”

Bryant said that the team’s goal in the spring is to “focus on the process that is required to achieve success” instead of “focusing on the success we’ve had in the past.”

The team begins the spring season in early February.