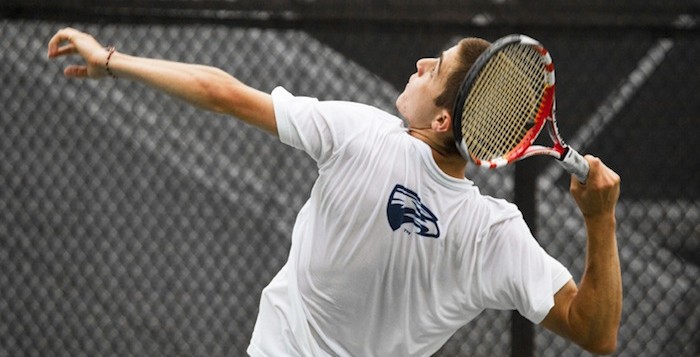 The men’s tennis team finished its fall season at the Grizzly Open last weekend, taking on Division II and National Association of Intercollegiate Athletics (NAIA) opponents for the first time this fall. The tournament, hosted by Georgia Gwinnett College, featured high-level play and was marked by successful performances by the Emory Eagles.

The inclusion of Division II and NAIA teams made the tournament the most competitive contest the Eagles saw in the Fall.

“Some of the guys we played had played professionally before going on to the NAIA. There was no easy match,” sophomore Andrew Lo said.

In the doubles competition, two Emory pairs advanced to the quarterfinals.

The first pair, consisting of junior Rafe Mosetick and freshman David Omsky, won three matches with a line of 8-3, 8-6 and 8-4.

They fought hard in the quarterfinals, but lost by a score of 6-8 to seniors Jose Soto and Nester Perez of the University of Alabama in Huntsville.

The second pair, consisting of freshmen Bart Panarese and Zach Surmacz, won two matches to advance to the quarterfinals. Panarese and Surmacz lost in the quarterfinals to sophomore Jordan Cox and junior Matias Hatern of Georgia Gwinnett College, who went on to win the tournament, by a score of 1-8.

Mosetick won his first match in a tiebreaker and his second match by a score of 6-1, 6-4. Mosetick lost to Georgia Gwinnett junior Erik Moberg 6-1, 6-0.

The experienced Mosetick attributed his success to his mentality going into the tournament.

“[An interdivisional tournament] doesn’t really mean anything. You just kind of go for it,” he said. “You try to be aggressive and take that big ball that you might not always go for, but that you need to if you want to win. In every match you swing for the fences.”

In Flight C of the singles tournament Surmacz also advanced to the semifinals before losing to Florida Southern freshman Brian Slivonik. Surmacz won three matches with a line of 6-1 6-1, 6-2 6-1 and 6-3 6-2.

With the fall portion of their schedule concluded, the Eagles will return to action this winter on Feb. 13, when they will host Oglethorpe University (Ga.).