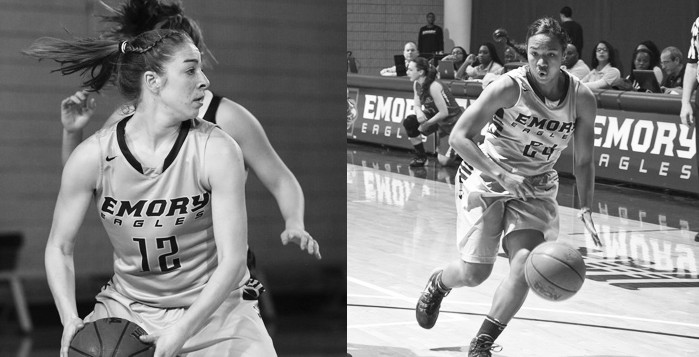 The Eagles defeated the LaGrange College (Ga.) Panthers 65-39 in their first game of the official season last Saturday. Courtesy of Emory Athletics.

The women’s basketball team started their official season off on a positive note last Saturday, defeating LaGrange College (Ga.) with a handsome score of 65-39. The Eagles are now 1-0 on the season, and improved their all-time season opener record to 18-9.

Although the Eagles ultimately overpowered LaGrange, the game started off very close. Throughout the first 10 minutes of the contest, LaGrange took advantage of turnovers and converted on their opportunities.

“LaGrange played very hard throughout the entire match,” Head Coach Christy Thomaskutty said. “They are a scrappy team and they never gave up. As for us, we need to cut off turnovers and shoot better at the free throw line. We were lucky to win the way we did.”

Around the 10 minute mark in the first half, the Eagles began to gain control. It started with back-to-back three-pointers by sophomore guard Shellie Kaniut and junior guard Khadijah Sayyid.

However, LaGrange kept the game close, converting Eagle turnovers into made baskets. Still, by the end of the first half, the Eagles were leading by a score of 27-23.

The Eagles came out off the bench focused in the second half, as the team cut back on turnovers and played with a much faster pace. With much better defense and a more efficient offense, the Eagles outscored LaGrange by a whopping 22 points in the second half.

Kaniut and Sayyid were difference makers throughout the entire match. Thomaskutty was very impressed with both of their performances, she said.

“Shellie [Kaniut] and KJ [Khadijah] stepped up in this match,” Thomaskutty said. “Both played with tremendous pace. KJ, when she was on the floor, led the team. She got hot after halftime, and the entire team played much better in the second half.”

“I think the game really showed our potential as a running and pressing team,” Kaniut said. “We have a lot of youth this year but we are working to use that to our advantage by relentlessly attacking on both ends of the court.”

The running and pressing style worked out for the Eagles, as the team finished the game with 14 steals, forcing 26 turnovers.

“It was definitely a great way to start the season,” Tsao said. “We are excited to use the win as motivation for our next practices and to propel us into our future games.”

While Tsao did not score over 20 points, she did record eight rebounds and six assists, while playing a solid 35 minutes.

The Eagles look to continue their strong start this Wednesday, Nov. 19, when they take on Oglethorpe University (Ga.) at the Woodruff Physical Education Center.