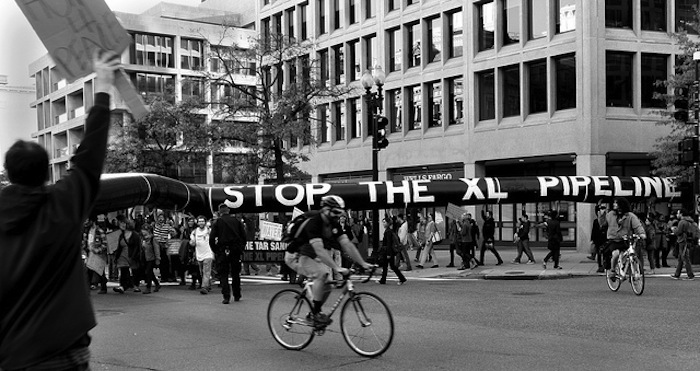 Last Friday, the House of Representatives overwhelmingly voted in favor of a bill that directs the federal government to proceed with the construction of the Keystone XL oil pipeline expansion. The pipeline is owned by the energy company TransCanada and has been in commission since 2010. It has been a hot topic in Washington, with President Barack Obama rejecting an application to extend the pipeline in2 012, followed by a sustained effort on the part of lobbyists and political supporters to garner support for the project.

Unfortunately, though not accidentally, Native American perspectives have been left out of the national discourse. Native Americans in both the U.S. and Canada have worked for years to stop construction of the pipeline, but the dispute has flared up in light of the recent House bill. In South Dakota, the Rosebud Sioux Tribe released a statement last week condemning Congress’ approval of pipeline as an “act of war.” This comes on the heels of several tribes, among them the Rosebud Sioux Tribe, adopting resolutions against the pipeline in February. President Cyril Scott of the Rosebud Sioux Tribe said that “the House has now signed our death warrants and the death warrants of our children and grandchildren.”

Criticisms of the pipeline have heretofore been largely ecological; commentators have expressed concern about the dangers the pipeline could pose to its environment. Others, such as Obama himself, have questioned whether the pipeline would have any meaningful positive effect for the U.S., worrying that it might in fact hinder the American oil industry. The basis for Scott’s statements are apparent. Tribal governments are, ostensibly, sovereign. This means that tribes ought to be able “to govern themselves, define their own membership, manage tribal property and regulate tribal business and domestic relations.” Furthermore, any dealings between the federal government and tribal entities are as between two distinct governmental bodies.

From a political perspective, the construction of the pipeline extension represents an intrusion into land that is not under the strict control of the U.S. federal government. Thus, the Rosebud Sioux Tribe’s statement reflects the concrete reality that territories belonging to Native Americans are often treated indiscriminately.

And these concerns are not simply ground- ed in concerns of sovereignty, valid as they are. The Pipeline Permit Application submitted by TransCanada to the South Dakota Public Utilities Commission states quite clearly that the pipeline could result in the disturbance, demolition, removal or alteration of “prehistoric or historic archaeological sites, districts, buildings, structures, objects and locations with traditional cultural value to Native Americans or other groups.”

Keystone XL would be a blight upon the lands granted to Native American tribes. The U.S. treats tribal lands as sovereign only insofar as they are someone else’s to care for, but ignore all such considerations the moment tribal lands serve national interests.

The Rosebud Sioux Tribe’s calls will likely go unheeded by American audiences. We must not view this as an unusual slight, but yet another cruelty in 500 years of violence.

For many, the narrative of Native American exploitation is ended. However, the reality is that the U.S. and its citizens continue to inflict demeaning, domineering and destructive acts against the people and societies of Native American tribes.

Only a direct recognition of these continued assaults can begin a mass movement to recognize the sovereignty, and humanity, of indigenous communities. This change is necessary if we wish to halt the cycle of oppression that characterizes U.S. relations with Native American communities.