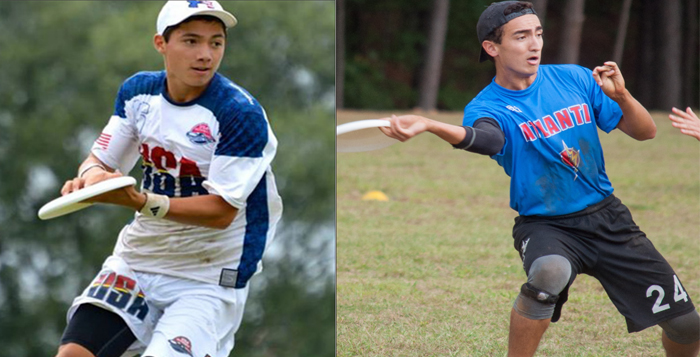 Freshman Anders Olsen runs the frisbee down the field (Left) and his older brother, senior Christian Olsen sets himself to make a pass (Right). The brothers, who play on the Emory ultimate frisbee club team, have both competed on the national level. | Photo Courtesy of Nate Haskell(Left)/ Photo Courtesy of James Crissman (Right)

When most think “frisbee” they visualize the carefree tossing of a neon-colored disk at the beach or playing catch with their dog at the park. But, add the word “ultimate” and the picture transforms into a fiercely competitive sport played in more than 80 countries by an estimated seven million athletes.

While most Emory students are aware of the sport’s existence, many do not know that two of their peers have played Ultimate Frisbee, also known as Ultimate, at the highest level.

They both got started playing Ultimate in highschool at Paideia, a private school in Atlanta with a long history of the sport and a reputation for being an Ultimate powerhouse. Their high school team competed with multiple college teams around Georgia, including Emory, whom they beat.

“At first, I thought it was a pretty wimpy sport, because the self-refereeing and ‘no-contact’ rules,” Christian said. “However, once I started playing, I realized that it was one of the best team sports that I could ever be apart of.”

Anders’ views on the sport similarly changed when he learned more about it.

“Having never heard of it, I thought the idea of playing a sport with a frisbee was stupid and comical,” he said. “However, the first day was a blast and I quickly fell in love with this new sport.”

At last year’s World Championships, Christian competed with an Under 23 Division team comprised of the best college Ultimate players in the country, a team which won the world title.

“It was great being able to represent our country, the Ultimate community of the US and our family,” Christian said.

Christian will be trying out for the 2015 National Team early in November in hopes of winning a second gold medal.

This past summer, Anders was a part of the Under 19 Division USA Team, which won silver at the world championships in Lecco, Italy.

“Playing on the nationals team was one of the best experiences of my life because I spent a chunk of my summer playing a sport I loved with people who loved it just as much as me,” Anders said.

Emory’s club team is growing as exciting new talent with the potential to shine is starting to become passionate about the sport.

“Emory is not a very big school, nor are we an Ultimate ‘powerhouse,'” Christian said. “But we are starting to accumulate the talent and dedication we need to really build a solid program here.”

Ultimate was first invented by a group of students at Columbia High School in Maplewood, N.J. in 1968. It is a unique sport due to its self-officiating, a concept known as “Spirit of the Game.” This theory promotes players making their own calls.

Athletes are thus responsible for their own actions in the game. Spirit of the Game is incorporated in the official rules and enforced in every level of the game from regional to international.

“My favorite thing about this sport is that it holds you to the highest standard of integrity for yourself and your opponents,” Christian said. “Because of [Spirit of the Game rules] we are forced to be honest and treat our competition with respect. I feel like all other sports lack that aspect of the game, even at the professional levels, occasionally.”

Anders’ favorite part of the game is its uniquely fast pace and strong community.

“It moves so rapidly that everything you do when you’re on the field is instinctual because there is no time to think,” he said. “[Ultimate is a] welcoming community, kind, yet competitive atmosphere.”

Because of their difference in age divisions on the national teams, this year on the Emory club team is the first real time the Olsen brothers have had the opportunity to play as teammates.

While some sports might make brothers compete for the top spot by pushing each other down, Ultimate offers an arena for each brother to get better by pushing the other to succeed.

“I think we are comfortable enough with each other to where I can give him direct, honest feedback and he will take it and do with it what he wants,” Christian said of his relationship with his younger brother. “He is constantly trying to get better and that’s why I try my best to push him every practice.”

Still, there are glimpses of a slight sibling rivalry between the two.

Christian, Anders and the rest of the Ultimate team are travelling to Statesboro, Ga., this weekend to compete in the Battle in the Boro, hosted by Georgia Southern University.