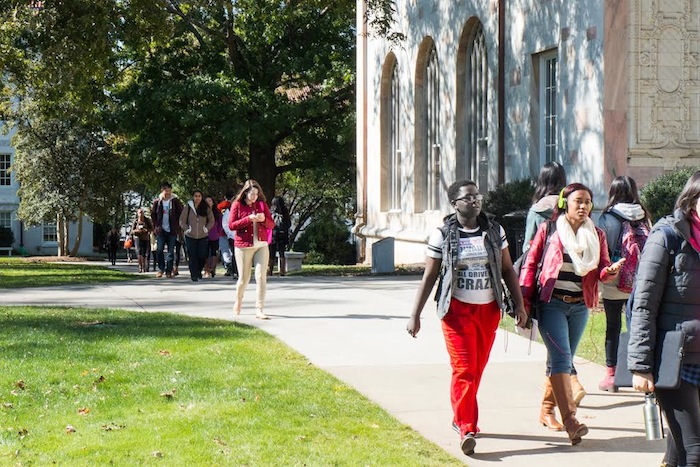 A female contacted police to report that she was raped by a male student at the Sigma Alpha Epsilon (SAE) fraternity house at around 10:30 p.m. on Oct. 31, according to an all-Emory email sent by Associate Vice President for Communications and Executive Director of Media Relations Nancy Seideman.

The female was acquainted with the male perpetrator, who was described as a white male with brunette hair, around 20 years of age, between 5 feet 8 inches and 5 feet 9 inches with a medium build, according to the email. The email encourages anyone with information regarding the incident to contact Emory Police immediately.

Following the email, SAE’s national headquarters launched an investigation into the circumstances surrounding the alleged sexual assault at the “Georgia Epsilon house at Emory University,” the organization announced in a Nov. 3 press release.

“We are committed to the safety and well-being of our members and the guests with whom they interact, and that commitment includes making sure our members provide a safe, enjoyable environment in their homes,” the statement read. “Any form of assault or sexual misconduct is unacceptable, and we will not tolerate actions that violate our values.”

The release noted that the national fraternity would not hesitate to take “corrective actions” or “impose sanctions” on any of its chapters that fall short of the fraternity’s expectations.

The Wheel contacted Sigma Alpha Epsilon President and College senior Thomas Ianelli but referred to the statement made by the chapter’s national organization.

Emory Senior Communications Officer Beverly Clark wrote in an email to the Wheel that in situations like this, police may or may not pursue criminal prosecution of the perpetrator.

Clark wrote that there are many factors that could lead to prosecution, some of which include whether a survivor is personally interested in prosecuting the alleged perpetrator or whether a local district attorney’s office decides to prosecute the case based on evidence available.

She added that a survivor could decide not to pursue criminal prosecution but instead participate in Emory’s internal conduct process.

Clark wrote that based on federal law, issues surrounding student discipline and conduct are protected by privacy provisions in the Family Educational Rights and Privacy Act (FERPA).

“In the case of a campus misconduct proceeding, university officials are bound by FERPA not to release specific information about any particular student conduct matter,” Clark wrote.

Some students were upset by the email citing the continual problem of sexual assault on Emory’s campus.

Other students felt the email left much to be desired and criticized its content and style explaining that it did not provide proper warnings and advice.

College senior and former SAPA President Elizabeth Neyman clarified that statements such as “after dark, walk with a partner or in a group whenever possible,” which appeared in a Feb. 16 public safety notice, place the responsibility for preventing experiences of violence on the sexual assault survivors.

According to Clark, the suggestions made by SAPA were considered and incorporated into the message reflected in the recently revised community notices.

“Community feedback regarding these messages is helpful in ensuring the goal of a safe environment for all,” Clark wrote.

Neyman said she also shared the letter with the new Senior Vice President for Communications and Public Affairs Jerry Lewis in an effort to ensure the all-Emory public safety notices are accessible to all.

If you or someone you know has been affected by violence, students can get free, confidential advocacy and support by calling CAPS 404.727.7450 and ask to speak with the Respect Program Advocate.

This story was updated at 12:55 p.m. on Wed., Nov. 5 to change the words “female victim” in the first and second paragraphs to “female.”