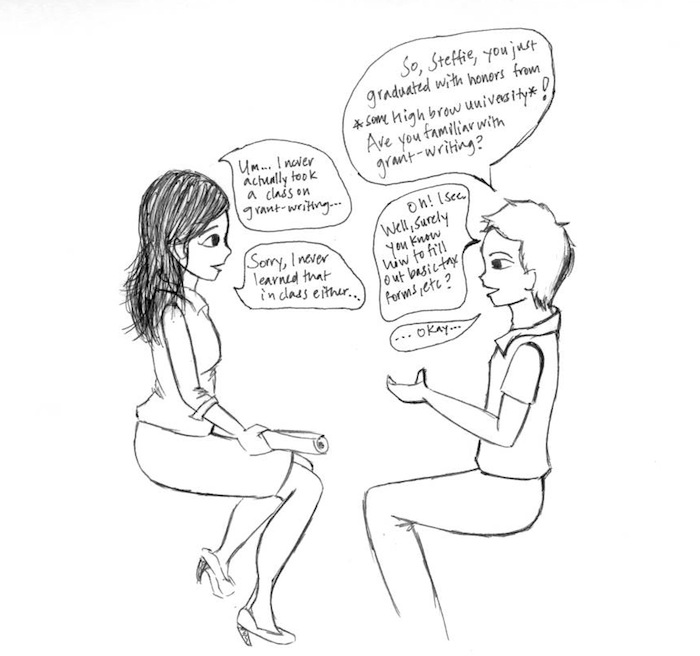 An April 24 study from CareerBuilder and CareerRookie reveals that 57 percent of employers plan to hire new college graduates, but “nearly one in four don’t feel academic institutions are adequately preparing students for positions needed within their organizations.” Essentially, this means that students are spending up to hundreds of thousands of dollars for degrees that may not secure the intended goal of a well-paying job.

Musician and author Frank Zappa writes, “If you want to get laid, go to college. If you want an education, go to the library.” I could not agree more. How often have you heard someone declare something like, “I’ve learned more at this job than in all my time in college”? Lots of times? Well, that’s because the real world is where you learn.

You go to college, meet some cool people, pick a major, probably change that major a million times and suddenly four years later you have a degree (i.e. the supposed golden ticket to a job). Alas, Willy Wonka was prophetic in demonstrating that golden tickets are rare.

While the employment rate varies from major to major, the CareerBuilder survey ranked business majors first and liberal arts majors ninth out of 11 in terms of in-demand majors. Fifty three percent of employers felt that schools place “too much emphasis on book learning instead of real world learning.” The majors that teach readily applicable technical skills can fail to blend that education with the necessary emotional intelligence that employers deem necessary the professional relationships that lead to both personal and communal success. Somebody who is known to be the best computer programmer in the world but cannot get along with other people may not be the ideal candidate for a position at a technology company. Liberal arts majors master this type of emotional intelligence known to employers as soft skills – these include skills such as a positive attitude, communication skills and the ability to work on a team. However, degrees in philosophy, creative writing and history do little to prove to employers that students possess the overall competence necessary to succeed in entry level roles that employers of the CareerBuilder survey claim “are growing more complex.”

Generally, businesses expect students to have done significantly more than obtain a degree. They want real-world experience and proof that enables somebody to perform meaningful tasks starting the first day. This is understandable, as businesses should seek competent employees since training is often expensive. But how much should really be expected of a young adult?
Graduates spend four years essentially learning how to learn, and then when the time comes to enter the work force, they’re expected to know how to do so many different things. Um, excuse me? That sounds like the square pegs won’t fit into the round holes. Businesses believe that graduates should take the time to learn how to do the work that needs to be done before they ever work for that company. They don’t want to afford talent the time to sand its edges until it’s well-rounded. Students should have taken the time to learn how to do everything in college.

In order to learn the real-world skills that employers desire, students need to work part-time outside of class, and do this while maintaining exemplary grades and a social life. They’re left on their own to convince businesses that they have what it takes to perform necessary tasks and subsequently cram all those working hours into your hectic schedule.

On top of that, the CareerBuilder survey claims that 64 percent of employers would be more likely to hire a graduate who supplemented traditional coursework with Massive Open Online Courses (MOOCs). This means more time outside of maintaining good grades that’s dedicated to improving your professional standing.

But tick, tick, tick, that clock never stops, and it takes time to identify desirable internships, craft cover letters, wait for interviews, wait for replies from those interviews, and then there’s the matter of spending excessive amounts of time working. That time isn’t easy to fit in when you have a full course load and extracurricular obligations to fulfill.

We all pay to go to college, but landing a job ends up being a matter of how we supplement our apparently overrated education.

– Alex Rosenfeld is a College senior from Allentown, Pennsylvania.