Resurrection Through the Internet 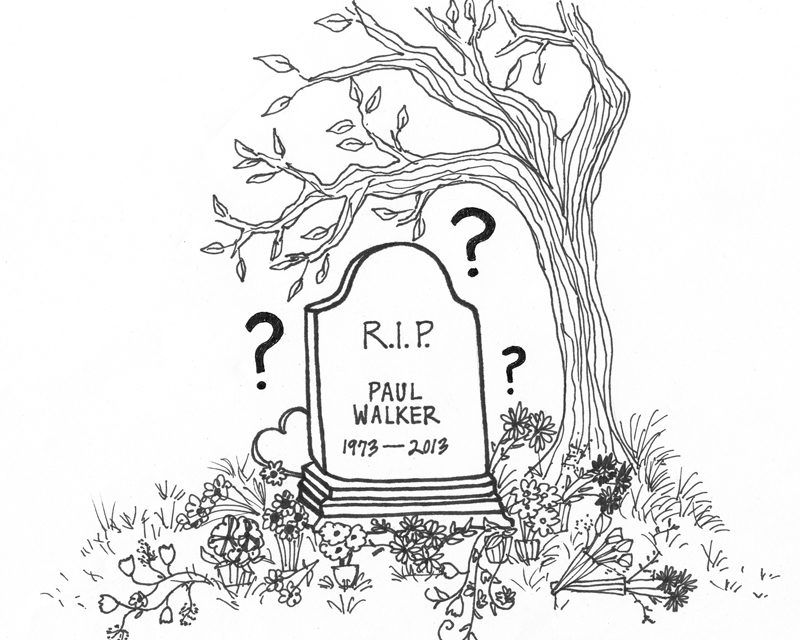 Walker was an American actor known for his role in The Fast and the Furious franchise – a collection of action movies and video games that basically is about Vin Diesel driving fast through explosions. Walker, who held a significant role in the series, died last week – ironically enough, in a fiery car accident.

This is not to trivialize Walker’s death, or death in general. What happened was still a tragedy, and it obviously carried enormous negative significance, particularly to Walker’s family, friends and coworkers. Regardless of whether anyone personally knew or enjoyed Walker, his passing was objectively unfortunate and sad. What doesn’t make sense, though, is that there was mass mourning.

Perhaps this phenomenon of mass, hollow bereavement is better understood through another example. Steve Jobs, the co-founder and CEO of Apple, died of pancreatic cancer in 2011, and the world found itself in a hysterical frenzy of web tears. There was a passel of Facebook statuses, tweets, articles, blog posts and mawkishly minimalistic eulogistic images that heralded the man as a visionary, hero, genius and “great guy” – despite the fact that most of these people didn’t even know Jobs, and those who did personally, including his colleagues, friends and own sister, unanimously conceded that the guy was a complete a–hole. But a lot people like playing “Candy Crush,” and some subsequently felt compelled to compose a 140 character commemoration about how they are “literally crying right now.”

This kind of pedestrian, rapid-response to death is not only directed towards celebrities and influential figures in society – we see it happen with everyday people as well. In the wake of neighborhood deaths, particularly in high school, I remember witnessing an outpour of eerily mournful posts, most of which were preceded by the phrase “I didn’t really know you, but…”

When presented with death, regardless of the relationship with the deceased, there is a general inclination to feed into an echoing and vacant somber song, and while I understand that the passing of any human being is inherently, collectively painful, mass mourning ultimately confuses me.

This is certainly a spectacle that has sprung out from the Internet, and I am hesitant to wholly claim that it’s something that is ultimately “okay” or “bad.” I don’t know exactly how I feel about it, and I think to dismiss a response to any death of any manner as superficial, empty, misguided and attention-seeking is too pessimistic.

This kind of cursory reaction to death is interesting, and it should not be disdained or even rejected just because it’s half-hearted. Perhaps, even, it could be directed in a more constructive way. The Internet has certainly brought people within closer proximity to each other and their doings – even if this proximity is virtual. If something like Walker’s death had happened 20 years ago, we probably wouldn’t have heard about it, because, let’s be honest – how many people really care about The Fast and the Furious series?

The vast accessibility and immediacy of massive amounts of information almost forces a response. Though this perfunctory “give and take” between humans and information and other humans can be cultivated into something much grander – a more universal capacity for empathy, a cathartic reaction to the human condition, but most importantly, a more comprehensive understanding of our own mortality.

The Internet facilitates this mysterious and oddly emotional response to death which certainly has the possibility to grow into a more advanced, empathetic connection with not just one person, but all people in general.

The intrinsic meaninglessness of not only the Internet but existence itself does not mean, however, that it isn’t necessary to cherish our emotions, to hold them and articulate them with utmost sincerity, tenderness and love.

Maybe the person who posted the “RIP Paul Walker” status was not mourning Walker himself, but all people, past, present and future – including himself.

I wrote this article before hearing the devastating news of Nelson Mandela’s death. I felt dazed and wounded, and upon reading over the statuses, tweets and posts of my peers – both long and short, affected and prosaic, warm and devastated, I was touched. Though I still felt somewhat apprehensive – why are we reflexively externalizing our feelings about the passing of one of history’s brightest figures? What does this mean? Have we replaced a more withdrawn, internal reaction to death with one more demonstrative? How does saying, “I’m sad” on the Internet dilute or substantiate actual feeling? As I scrolled through posts I felt consoled, sorrowful and uplifted, but most of all, I simply felt – and there is something deeply valuable in this.

That being said, I still don’t care that Paul Walker died.

The author’s name of this piece has been removed due to personal circumstances. If you have any questions about this decision, please email [email protected]