The Dawning of Medicine 2.0 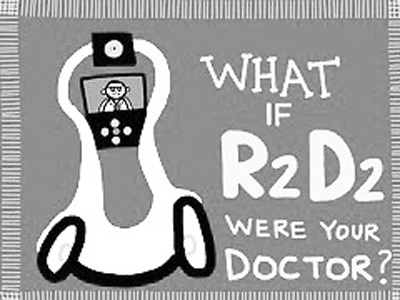 The first generation Indian immigrant and son of an Indian nurse has some limited career options: Doctor. Doctor. Engineer … maybe. Mostly Doctor. The archetype I developed was an older white man, with a large patient file in his hand, a long white-coat draped around him, in an office full of old medical tomes, solving complex puzzles and saving lives.

Today’s doctor looks radically different. For one, The AAMC indicates that the physician workforce has undergone a healthy feminization and is currently at a sort of steady-state. Additionally, while it doesn’t reflect our population, the number of non-white physicians is growing as well. I can tell you from the inside of my lecture hall at the Emory School of Medicine, the diversity is meaningfully apparent. With a variety of skill-sets and life experiences, both cultural and technical, we educate each other as colleagues in more important ways than our pathology texts can.

The health care environment we’re inheriting is a novel situation. It always is (that’s what science will do, see). The introduction of the affordable care act, a pervasive conscientiousness of sustainability (financial, environmental and otherwise), the advent of Big Data and more importantly, the ability to make meaning of Big Data is reinventing medicine in ways only Jules Verne would’ve guessed.

The Wall Street Journal recently published a piece on the introduction of a new FDA approved device, Sedasys made by J&J, that makes the presence of an anesthesiologist at outpatient colonoscopies unnecessary. That’s right, robots over anesthesiologists. This pissed a lot of my anesthesiologist friends off.

If this is reminding you of Ken Jennings vs. Watson, you’re on the right track. Watson wasn’t created to beat people at Jeopardy though. In February 2013 IBM entered into an agreement with Sloan-Kettering that will make Watson’s prodigious natural language processing skills and artificial intelligence available for doctors. Given a patient presentation, Watson will provide potential diagnoses and treatment steps, with a confidence score. Reportedly, Watson has all the knowledge of a second year medical student and has been mulling over millions of patient records fed to him by the folks at Sloan-Kettering. Interestingly, Sloan made a name for himself as the leader of GM with his pioneering work in planned obsolescence during the 1920s-1950s. His legacy lives on in a more pervasive, subtle and powerful way than even he might have guessed.

A few months ago I started following Lisa Fields on Twitter. Apart from being a TEDMED moderator, she manages evening Twitter conversations with the hashtag #HCLDR (health care leader). Discussions often revolve around topics like patient-champions, physician error and personalized medicine. Physicians represent just a part of the conversation but it’s largely driven by patients, tech nerds, non-profit folks, members of large foundations, policy analysts, dedicated hospital social media reps and important folks in allied health. These people are engaging in a national dialogue about the current state and future of health care. It’s reflective, prognostic and solution-oriented. This is the health care milieu we’re about to own. And I haven’t even given you the demographics of the aging population and obesity – suffice it to say The Huffington Post isn’t the only group worried about our parents and our kids.

So here’s what I’m predicting: Physician 2.0 will need to look more like project manager and less like a boutique artisan. Her time will be dedicated to providing the human touch to a largely automated, preventive-health oriented care delivery model. She will be very much a team-player and constantly reminded of managing the health of a population versus that of a single patient. She will need to have a developed emotional acumen, along with a savvy for operating and interacting with machines.

Her thinking will have to be bigger than an algorithm – she will provide the creative, out-of-the box solutions and diagnoses the machines won’t quite capture. She will inform the artificial intelligence of machines executing health care duties through clinical trials and acquisition of new knowledge. Her ability to coordinate teams of people in the management of care will supersede the need for her time to see patients one-on-one. The things that physicians have built specialty practices around via pattern recognition, particularly putting together a constellation of lab findings and physical exam signs, or even just picking up patterns on imaging or sample staining will largely be the job of quickly-adapting algorithms. Physicians will be around to catch the mistakes.  For now, surgery may still prove to be an area where human decision making and the fine motor skills of the human hand are preserved, but machines will probably do your appendectomy in 100 years. The DARPA Robotics Challenge will see to that.

People get scared sometimes when we throw around ideas of machines taking work from us. Will we become obsolete? That’s like saying, well, now that we have automated weapons, we don’t need police, or now that trains can drive themselves we don’t need operators. As a former grunt at a software company, I recognize that any system built by humans will be prone to failure. But it’s exciting to think that our machining and technical advancements will one day produce an environment where those failures are fewer.

Where human life is prolonged to it’s healthiest extent. But we’re still playing catch-up in ethics, empathy and economics in an unprecedented way. Our diverse cultural, social and technical characteristics as caregivers is the one source of hope I hold on to.

I look around at the engineers, the former Teach for America corp members, the artists, the linguists, the speech therapists in our Med School class, and it gives me hope. Hope that we will be nimble and willing to adapt to our patient’s needs and our nation’s needs. Hope that we will be meaningful participants in reducing the cost, improving the quality and expanding access.

This is the age of Medicine 2.0, let’s see if we can develop some Physician 2.0s to provide the care we need.