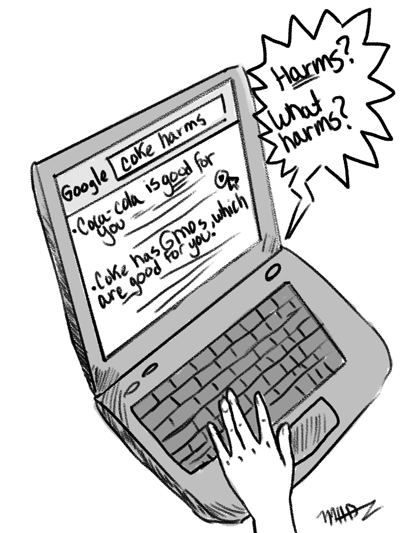 In a Nov. 24 article titled “Coca-Cola Also Probably Owes You $45” is problematic for numerous reasons. The article relies on a scientifically tenuous concept of the safety concerns surrounding Genetically Modified Organisms (GMOs), displays blatant bias in addressing the actions of corporations, assigns malicious intent without considering alternative explanations to behavior and serves only to further public misconceptions surrounding a scientifically complex subject.

I will attempt to clarify the scientific nature of the debate surrounding GMOs and reaffirm the need to avoid presenting personal bias or unproven allegations as fact.

From the beginning of his article, the author makes his bias clear: “I express slight reluctance towards all multinational corporations telling me that something I’m eating, drinking, doing or consuming is ultimately good.” Automatically distrusting a source of information, distinct from objective skepticism of all claims, will inevitably tint any future research on topics related to them resulting in confirmation bias – you’ll only find sources that agree with you, and you’ll ignore the ones that don’t. The author singles out two specific incidents as being damning evidence of Coca-Cola’s malicious intent towards humanity: the investigation of union workers’ complaints in Columbia and the Washington I-522 initiative.

The Washington I-522 measure would have required companies wishing to sell products containing genetically engineered ingredients to label them as such. Where the author goes off-course is by only discussing the opponents of I-522, and by assigning malicious intent to their decision to oppose I-522: “Coca-Cola was, financially, one of the biggest opponents to mandated transparency in food marketing, and moreover a general shift towards healthier, more sustainable methods of food manufacture.”

First, the author is referring to I-522 merely as affecting transparency in food marketing, which is not necessarily the case. Second, the author is very clearly implying that non-GMO based products are inherently “healthier, more sustainable methods of food manufacture.” As I will discuss later, the scientific consensus suggests that this is incorrect. It’s also important to note what the author doesn’t say here: what about the people who supported the I-522 ballot? Companies both for and against the ballot had financial ties directly associated with the outcome. Consider the top sources that donated money to support I-522 – companies with a direct financial tie like Dr. Bronner’s Magic Soaps, Nature Foods USA and alternative medicine proponent Joseph Mercola.

So is this a simple battle of good vs. evil as the author has implied? Look at Mercola. He has been the subject of four FDA warning letters alone regarding his medical practices. Why would a person like this be donating money to support I-522? Is it solely out of the goodness of his heart, or is there something deeper going on with I-522?

I consider the author’s portrayal of the Columbia union incident to be one-sided at best and lacking in sufficient research. First, take a look at the original New York Times article that the author’s article referenced. I consider it ethically reprehensible to refer to an organization as “murdering” or “imperialist” on the basis of unproven charges regarding the actions of two facilities in the 1990s.

Further, it is a fundamental mistake to treat any organization as a monolithic entity entirely responsible for the actions of every subsidiary throughout history. The stance is inherently hypocritical; if we’re to condemn Coca-Cola on the basis of unproven charges, then we must do so for every corporation we can think of with (even unproven) negative spots on their history. To do otherwise would be intellectually inconsistent.

And why stop with corporations? Governments, regimes, political orders, the United Nations, non-profits, NGOs – it is too simple to cherry-pick examples of past harms committed by a minority group within a larger organization to make a group as a whole look bad. This is not to excuse any harmful actions individuals within Coca-Cola may have taken. Anyone involved in crimes against workers should be punished. But it is a mistake to condemn the entire company (and Emory’s relationship with the company) on the basis of the unproven actions of a minority.

Yet the biggest harm caused by the author’s article lies not in defaming Coca-Cola on the basis of unproven charges, but rather in perpetuating a woeful misunderstanding regarding GMOs. Consider the BT Maize scare: in 2009, a single researcher released information suggesting that Monsanto’s genetically modified corn would cause tumors in rats and harm pregnant women. The claim was subsequently debunked by the scientific community, but the financial damage was done. General Mills, Trader Joes and Whole Foods had already moved to ban the sale of foods containing the crop.

I encourage readers of both this and the author’s editorial to look up more examples on their own. The pattern is consistent: a source releases information suggesting that GMOs are unsafe, the public and media react in a frenzy and the scientific community rebuts the original information, but the financial damage is too late to fix. So is Coca-Cola opposing I-522 because they don’t like consumer transparency? I believe that one can reasonably suggest that instead of a simplistic portrayal of Coca-Cola opposing consumer transparency, Coca-Cola may well have been opposing I-522 out of fear of a scientifically misinformed consumer base reacting negatively to a “Contains GMO” label.

So what about the overall safety of GMOs? I urge every single reader of both the author’s article and this one to consider the existing scientific evidence. This year a meta-study was conducted, reviewing over 1,700 scientific articles from the past decade about genetic engineering.

This meta-study found no plausible evidence of hazards to humans from the use of genetically engineered crops. The author has only provided you with one side of the debate. Read the editorials from 14 major Washington newspapers opposing I-522 and consider alternative arguments.

Please, don’t take my word for it – fulfill one of our community’s core principles and conduct your own critical analysis. But I suspect that if you do so, open to the possibility that public perception around GMOs is not scientifically grounded, you will reach the same conclusion that I have.

The author displays an admirable desire to see social justice reached; I do not question his motive. But the pursuit of justice combined with a misunderstanding of scientific research can cause far more harm than good. Given the history of GMO opposition, a very reasonable argument may be made that corporations assume that GMO labeling is not a question of providing the consumer with information needed to make healthy decisions (since there is no scientific consensus about GMOs harming people) but rather providing ammunition to a politically active and scientifically misinformed base of consumers who rely on unproven evidence and arguments – and whose actions result in direct financial harm to the company. This version of events explains Coca-Cola’s I-522 actions without demonizing them.

I believe the author’s article provides a valuable opportunity for our community to reaffirm our commitment to the value of scientific inquiry, and to the idea that we should require concrete evidence before condemning groups we distrust.

Levi Lyman Barner is a College junior from Americus, Ga.

The author’s name of the editorial “Coca-Cola Probably Owes You $45” has been removed due to personal circumstances. If you have any questions about this decision, please email [email protected]