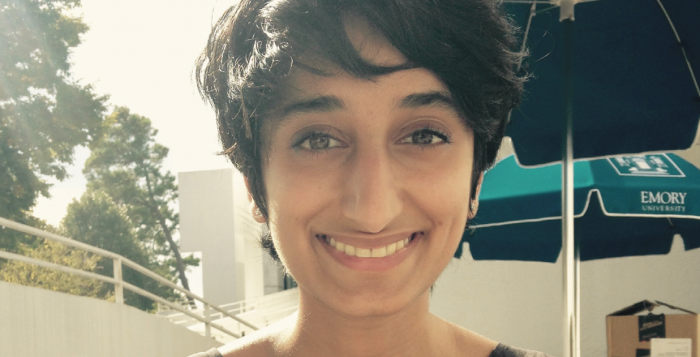 College junior Nadia Irfan (Above) shares her thoughts on family and her memories of religious
ceremonies back home.

The Emory Wheel sat down with Nadia Irfan to discuss her personal memories.

Ricardo Pagulayan: Okay, let’s start with the basics. What’s your name, and what year are you in at Emory College?

Nadia Irfan: My name is Nadia Irfan, and I am a third year at Emory.

RP: Where do you live, Nadia?

NI: I live at Clairmont at the Tower apartments.

NI: Well, Eid was just the other day. I don’t know if you’re familiar with it, but Eid is a really important holiday for Muslims. The one that just passed is Eid al-Adha, and it’s basically a time for families to come together. I didn’t go home for it this year, and Eid just made me miss my family so much.

RP: Is there anything you would be willing to share with us about your family? What are some things that you remember them for?

NI: Well, it’s funny you should ask because just a while ago I was thinking about the time my family and I went to visit the Philadelphia Museum of Art for the first time. There was this room with these huge tapestries hanging on the walls, and I’m sure they were really old, too. Well, my grandma thought it would be a good idea for her to feel up the tapestries so she could determine exactly how good of a quality the cloth was. So she reaches out and touches the hanging tapestries and right away she was reprimanded by one of the security guards. You were not supposed to touch the tapestries at all! So, you might not be surprised that they told us to “move along,” so they basically shooed us off.

RP: Wow! Your family seems like a funny bunch.

NI: Yeah, but their humor can be a little dark.

RP: What do you mean?

NI: I almost drowned once at Jacksonville Beach. My uncle came to save me, but right after he admitted that he was only mildly concerned about the fact that I was drowning and more scared of how bad my dad’s anger would be towards him if I died under his watch. That’s just one example.

RP: What other vivid memories come to mind?

NI: My family friend Talib recently had a kid. When he was in the middle of a Thanksgiving party, he needed to give his kid a bath. As a Pakistani man, it’s a little odd for a man to take care of a baby at a party. At the end of the party, Talib asked my uncle’s kid to come upstairs with him, and my uncle’s best friend leaned over to my uncle and whispered, “I hope he’s not trying to give him a bath, too.” And my uncle shot upstairs to see what was going on.

RP: So what happened to your uncle’s kid?

NI: Talib is just a genuinely nice guy. When he told my cousin to go upstairs with him, he thought nothing of it. He just wanted to give him a present of cookies and goodies. My uncle thought it was really suspicious though. It makes me laugh now and then.

RP: When you’re down, what memory of your family makes you smile or feel better?

NI: Okay, I would have to say it’s the image of my mom looking through binoculars when she was spying on a wedding going on in our neighbors’ yard. That’s my mother.

RP: What do you want to say to your family right now, Nadia?

NI: I am really excited to see them again!​