Located just 17 minutes by car from Emory University, Cafe Sunflower provides a stellar vegan cuisine with a wide array of foods from all around the world. Whether you’re a plant-based eater, looking to dip your toes into veganism or are just hoping to accommodate your vegan or vegetarian friends, this cafe is the perfect place to go for a memorable dining experience.

I went to Cafe Sunflower with my dad on Feb. 23, a birthday tradition that started a few months before the pandemic began in 2020. For a Wednesday evening, the restaurant was surprisingly crowded, with almost every table occupied. The dining space itself was casual and relaxed, with simple wooden decor. The hanging lights and modern artwork around the restaurant brightened the interior considerably, giving it a charming ambience. 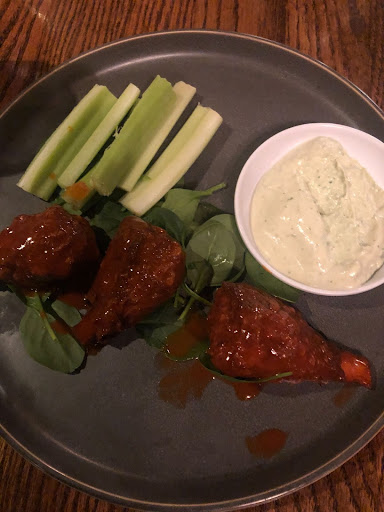 For our appetizers, we ordered the Buffalo Lollipops and Steamed Dumplings. The lollipops were my favorite part of this dinner. These soy chicken drumsticks were coated in a rich buffalo sauce with a vegan blue cheese dip on the side along with a few refreshing sticks of celery.

The drumsticks were so tender and succulent, and their bold flavors were complemented well by the light and creamy dip. My only complaint was that there weren’t enough of them!

The steamed dumplings were very flavorful, as well, filled with a colorful blend of Asian cabbage, carrots, tofu, black mushrooms and spinach and accompanied by a piquant soy-ginger dipping sauce. This appetizer is a great choice for anyone who enjoys Asian food but prefers a milder spice level.

From shrimp tacos to orzo eggplant lasagna, Cafe Sunflower offers delectable main courses from various international cuisines. We decided to get the Pesto Pasta and Spicy Pad Thai Noodles, old favorites of ours that we wished to experience at the Cafe Sunflower.

The pesto pasta was mouthwatering, with a walnut pesto sauce that could easily pass for traditional pesto. The dish was topped with broccoli, spinach, mushrooms, artichoke and capers, with two pieces of garlic bread on the side to make for a well-balanced and filling meal.

While the pesto pasta was a treat, the spicy pad thai noodles were a bit disappointing. Not because the dish wasn’t tasty,  but rather because the noodles were a very Americanized version of this vibrant, zesty Thai dish, coming across more as a bowl of pasta than noodles because of the creamy sauce.

A good choice for those who follow a gluten-free diet, these rice noodles were garnished with zucchini, green beans, red bell peppers, mushrooms, baked tofu, kale, carrots and crushed peanuts with a rich coconut-tahini sauce. The sauce reminded me of alfredo sauce, except that it was strongly infused with coconut essence.

It was a far cry from traditional pad thai, which is sweet, savory and tangy, and it didn’t live up to its spicy advertisement. Nonetheless, this entree was comforting and the assortment of vegetables made it healthy and eye-catching.

We chose to skip dessert, as the restaurant only offers a selection of vegan cakes that we did not want at the moment. From previous experiences, the cakes are scrumptious, with my favorite being their carrot cake.

Skipping dessert gave us time to look at the many plaques at the entrance of the restaurant that are dedicated to Lin and Edward Sun, the chefs and owners of this nationally recognized and award-winning restaurant.

While their Sandy Springs restaurant, founded in 1994, closed after 25 years of being in business, the Buckhead restaurant, founded 3 years later, is open and thriving. The chefs founded Cafe Sunflower after learning about holistic health and becoming vegetarians in the early 1990s.

Already in the restaurant business, the owners sold their existing restaurants to found Cafe Sunflower, hoping to make vegetarianism more accessible and to alter a common perception of vegetarian fare as flavorless and boring.

The chefs accomplished this mission, as the global cuisine offered at this restaurant is delectable. Cafe Sunflower has revolutionized the plant-based culinary scene in Atlanta, and I would highly recommend it to everyone, vegan or otherwise!