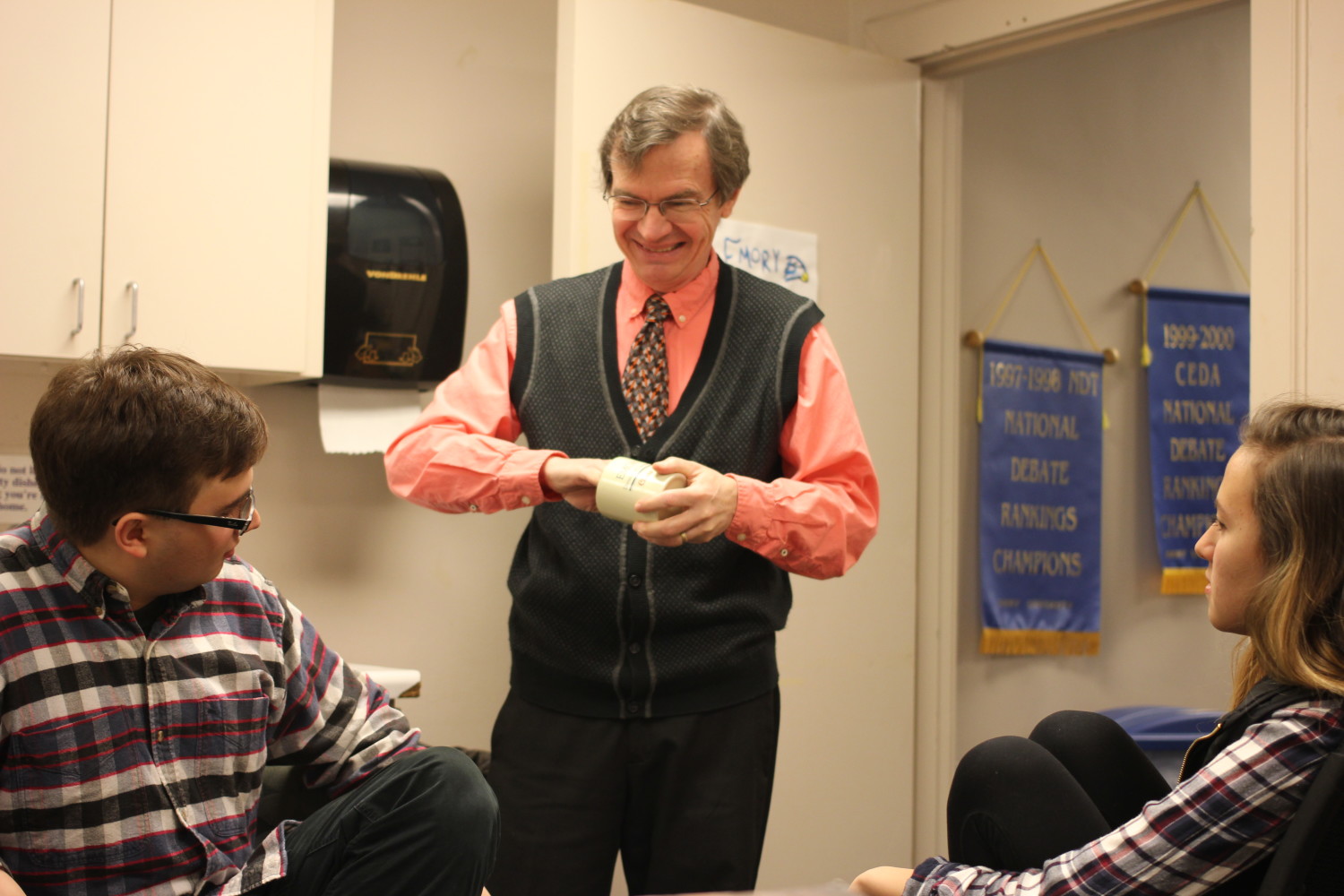 Emory’s Barkley Forum received two automatic first round bids to the National Debate Tournament in Binghamton, New York which will take place the first weekend of April, excusing them from district qualifying tournaments. The teams, each made up of two students, that are chosen to receive these bids are ranked among the top 16 teams in the country. A maximum of two teams from the same university can receive automatic bids.

There are three aspects of the Barkley Forum debate program: competitive debate, community outreach and campus engagement. It is the competitive debate aspect that encompasses the first round bids the team received.

“You can qualify [for an automatic bid] in three ways, ” College junior and first round bid recipient Kristen Lowe said. “The first and most prestigious way is through what’s called the first round process, in which, based on your aggregated performances throughout the year, a group of coaches and leaders in the debate community get together from around the country and submit rankings of teams who have been considered to be a top 16 team.”

Once those rankings are compiled and averaged, the list of the top 16 teams in the country out of approximately 300 debate teams is released. Those teams are given an automatic invitation to the national tournament.

“For [Emory] to have two of the 16 out of those 300 [teams] is not only indicative of the success of those two individual teams, but it also speaks to the squad and the way in which the unit works well together,” Executive Director of the Barkley Forum Ed Lee said. “And [to] the fantastic coaching staff that we have who spends their entire weekend hanging out with the students and helping them structure arguments and deal with successes and failure.”

College senior Jason Sigalos and College junior Viveth Karthikeyan are partners who also received a first round bid. This will be Sigalos’ fourth time going to the national debate tournament. He began debating at Woodward Academy in College Park, Georgia.

“Ed Lee, our current director of debate at Emory, came to a couple tournaments with Woodward because he knew my coach at the time and we got to meet him, got know to him,” Sigalos said. “He talked to me about debate at Emory and I decided to come here … It’s been a long four or five years of participation in Emory Debate.”

College junior Brian Klarman, Lowe’s partner, came from a well established debate program at Pace Academy in Atlanta, Georgia. Lowe also has competed in debate since her freshman year of high school, but came from a less substantiated program.

“I came to Emory and was very determined to kind of rise quickly and develop and it was certainly, truly seven hard years in the making,” Lowe  said. “We are fortunate to have what I think is the best coaching staff in the country, and it’s hard to describe the impact they’ve had on enabling my growth. A lot of people started [well], and I did not. I would not have become better without [the coaching staff].”

Coaches are instrumental in advising students about how they should approach the specific topic of debate, in addition to providing guidance that pertains to other aspects of the students’ involvement and life as a whole.

“We have a desire for them to be competitively successful, and they are, but we also expect for them to take what they learn and use it to make Emory’s campus better by participating in conversations,” Lee said. “[The debate students can] also make the larger world better by being more just, by being more culturally humble in the ways in which they interact with people off of campus.”

The outreach aspect of the program is also a large part of the Emory debaters’ experiences.

“All debaters work with the Atlanta Debate League, which was started by Emory,” Klarman said. “So we work with kids who are usually in middle school or high school, and we judge debates that they have. We give them advice. We have a program called The Debate Center, where, over the summer, we work with high schoolers or middle schoolers and try to teach them [about] debate.”

The Emory students’ commitment to the debate program has shaped their lives on a day-to-day basis and continues to guide the direction in which they will go forward.

“Right now, I’m in one class, so I spend most of my time in the debate office doing research for our topic and talking to coaches about arguments,” Sigalos said. “That’s kind of a trend that began as soon as I arrived. When I came here, I cared about academics and what not, but socially, my one focus was debate. So I would spend a lot of hours in that room late into the night when other people had gone home, and then I would just walk back to Longstreet-Means to sleep and then come back and do it all over again in the morning.”

The time the students put into preparing their arguments is apparent in their daily schedules.

“On any given day I’ll set aside two to three hours to just do work,” Lowe said, “Which is research, predominately just creating arguments by reading. I spend most of my day in the debate office, which in and of itself is preparation because I’ll meet with coaches, talk to them about ideas and formulating arguments. Or we’ll discuss things that went wrong in tournaments or how to improve upon them. I’ll give speeches, we’ll have practice debates. On any given day, if I’m not doing school work, I’m doing debate work. It is tough to balance, but debate is so incredible because it gives you the tools to be a better student.”

In addition to providing a tool kit of sorts, some students believe that debate provides a certain template for how to think, write and work. However, the time commitment can have negative, as well as positive, consequences.

“I actually had this really ridiculous habit my first year here of going up to the DUC, grabbing a burger and putting inside of it a slice of pizza and then carrying that back down so that I could spend as much time in the debate office and what came to be the most grotesque and unhealthy lifestyle I could imagine a first-year engaging in,” Sigalos said.

The lens of debate allows students’ personal views on the world to be filtered.

“It forces you to challenge and question every view that you have previously held and currently hold because you’re going to be testing your ideas against some of the smartest young minds of the country on any given weekend,” Klarman said.

Some students believe that debate allows them to grow as students, academics and citizens, as it teaches them to be critical and, at the same time, open-minded.

“I used to tell people that everything good in my life came from debate,” Lowe said. “It sounds dramatic, but I really mean that. I think [debate] has really made me a better person. The values that are embedded into a debate program are really central to the way, I think, we as humans should interact with each other. It’s openness to otherness and things you’re unfamiliar with. It’s willingness to engage in and respect ideas other than your own. Those things teach you to be better people. I think debate is where I found a lot of my values that kind of drive who I am.”

The competitive debaters see the impact of debate on their greater studies, as it piques their interest in new areas.

“In debate we talk about a lot of ways that politics and thoughts about the world arise which kind of led me into studies that follow philosophical inquiries of how we think about the world, so it’s hard for me to divorce a lot of what I do from debate,” Klarman said.

Lowe also believes debate will play an instrumental role in guiding her down her future path.

“I would love to do public health nonprofit work, and I think the drive for service … came from debate,” Lowe said. “It really takes experiencing something that’s given you as much as debate has given me to realize how capable you are of giving things back to others.”