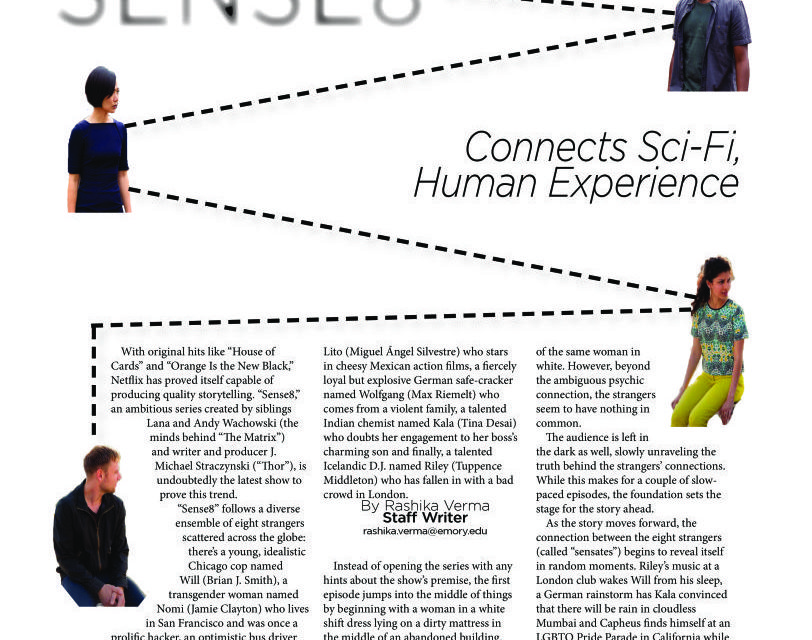 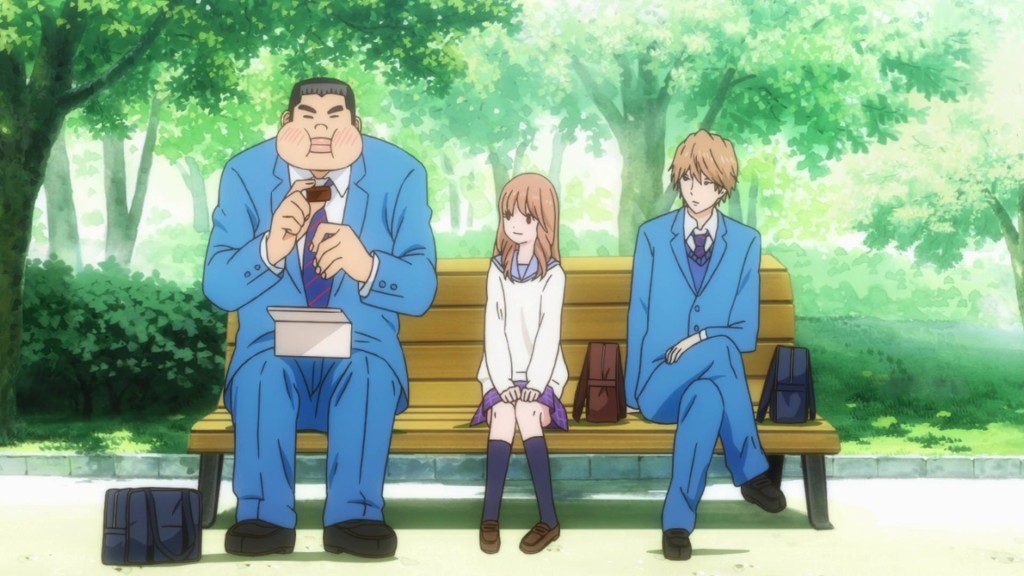 Show “Ore Monogatari!!” brings a fresh, unorthodox approach to anime with its novel themes and unorthodox characters. / Courtesy of Crunchyroll

“Ore Monogatari!!” — “My Love Story!! — is an anime with a familiar theme expressed in a novel way: genuinely good and honest people will find lifelong love and happiness.

It’s true that many other animes claim the same message, but a large majority cheat its meaning by making the protagonist physically attractive or giving them the capacity to become so.

Even in the case of Japanese manga and anime, this societal norm still rings true; character designs seldom stray from a slim, attractive figure.

The protagonist, Taeko, is constantly misjudged, but kind and righteous. With a large face, massive build, small eyes, voluptuous lips puffier than Angelina Jolie’s and an unconventionally intense personality, Takeo is the polar opposite of the physical ideal of the Japanese male.

In the first episode, Takeo lives what is an ordinary day for him by going out of his way to protect and help a stranger. That stranger turns out to be Rinko, a sweet girl who is instantly attracted to Takeo for his benevolence, morality and sense of justice.

But the story isn’t over.

The writers don’t waste time bringing Takeo and Rinko together. The two quickly begin dating, and then comes the real treasure of this anime — the story of how they fall deeper and deeper in love.

A common norm in Japan and Japanese anime is for people in relationships to say “I love you” to each other extremely early in a relationship. The writers recognize that at such an early stage of a relationship, “love” cannot entirely be genuine.

If this was a typical shoujo anime in which that loaded phrase is frivolously said at any moment a character feels attraction for another, “Ore Monogatari!!” would not have the sincerity and heart that it proves to have as the season progresses.

Takeo, never having a girlfriend before Rinko, thinks “I love her!” countless times just after seeing her face. His affinity for Rinko is intense, but as Takeo’s best friend Makoto Sunakawa (voiced by Nobunaga Shimazaki) points out, Takeo always likes girls who seem nice and get along with everyone. It makes you wonder if Takeo really loves her, or if he just loves having a girlfriend and is simply enjoying that partnership.

As Takeo and Rinko learn more about each other, they become closer, go through adventures and misunderstandings and Takeo stops thinking “I love her!” whenever Rinko does something general like smiling, but begins to think “I love her!” when her idiosyncrasies come out — for example, frantically blowing on hot food before eating it.

Another aspect of the show that speaks to the novelty of its message is that Takeo has an ample amount of school friends who admire Takeo’s kindness, reliability and work ethic.

Typically in animes, one’s popularity and social aptitude directly correlates to their attractiveness. For example, there is the classically disheveled, glasses-wearing character who longs to make friends, but is blatantly ignored by his classmates solely because of his undesirable appearance. Considering Takeo’s not-so-typical physicality, his apparent popularity is both surprising and refreshing.

Sunakawa has all of the qualities of a textbook bishounen (“beautiful male”): a small face, large eyes and a slim build.

But here, Ore Monogatari!! demonstrates even more originality. Sunakawa is not a one dimensional character in the sense that his only purpose as a character is to serve as the attractive male counterpart to Takeo. He delivers hilarious one-liners and demonstrates integrity in his loyalty as a friend time and time again.

Among other things, he rejects an uncountable number of confessions from girls for the same reason: they’ve all talked badly about his friend Takeo’s appearance behind Takeo’s back and Sunakawa would only consider dating someone with a good heart who wouldn’t do such a thing.

Being that the universal norm for media figures such as actors, actresses, spokespeople and even some politicians is to align themselves with an accepted social pressure to be fit, beautiful and nonchalantly suave, “Ore Monogatari!!” takes a refreshing stance against that.

It’s another way that the writers of “Ore Monogatari!!” express the theme that good people will be recognized for their qualities, and that no matter how uncertain it may seem, one’s appearance is truly only superficial.

Apart from its “Chicken Noodle Soup for the Soul” tone, one of the most appreciable attributes of this anime is the boundless humor present in each episode. While Takeo’s unorthodox intensity and innocence is usually the source of the jokes, the writers also always place emphasis on how those qualities add to, rather than detract from, the reasons why Takeo is respected and loved by each character who becomes acquainted with him. In short, the humor in “Ore Monogatari!!” is as sincere as the characters in it.

The season finale airs in Japan on Wednesday, Sept. 23. The English subtitled episode will air online on website “Crunchyroll” on Thursday, Sept. 24.