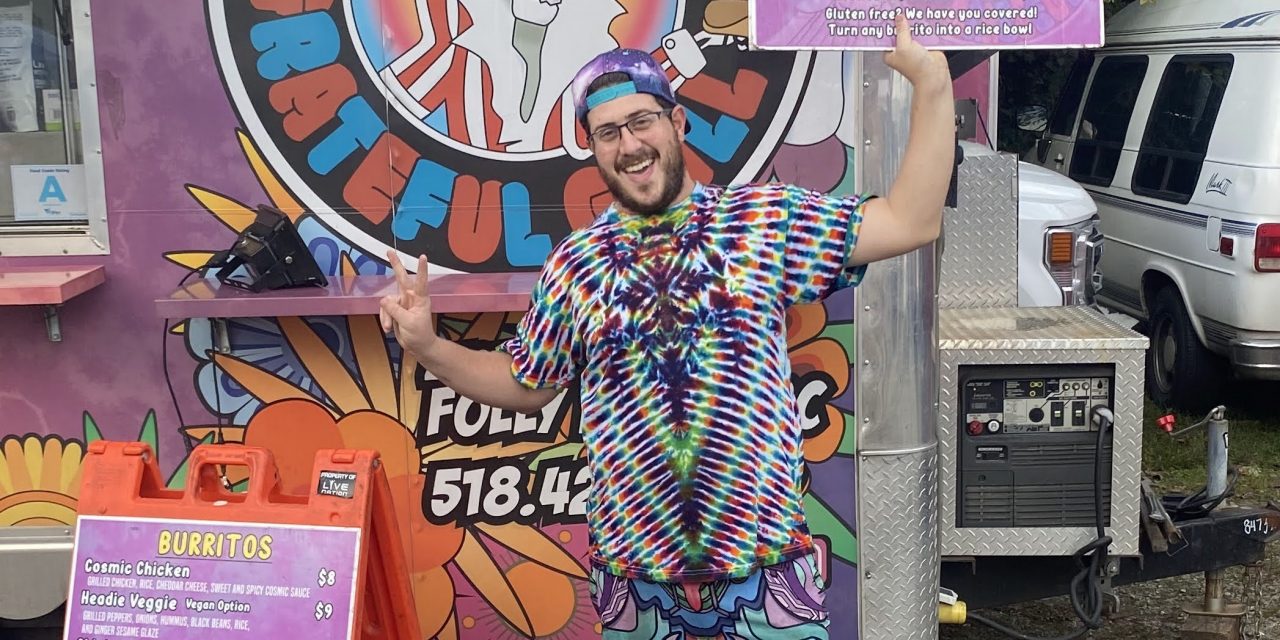 Although not the actual Grateful Dead, Dead & Company are one of the prime remnants of old-school American counter-culture. The Grateful Dead ended in 1995 after the death of Jerry Garcia, and Dead & Co emerged as the modern iteration of the post-Jerry band, with Bob Weir, Billy Kreutzman and Mickey Hart still playing from the original band along with John Mayer on lead guitar. 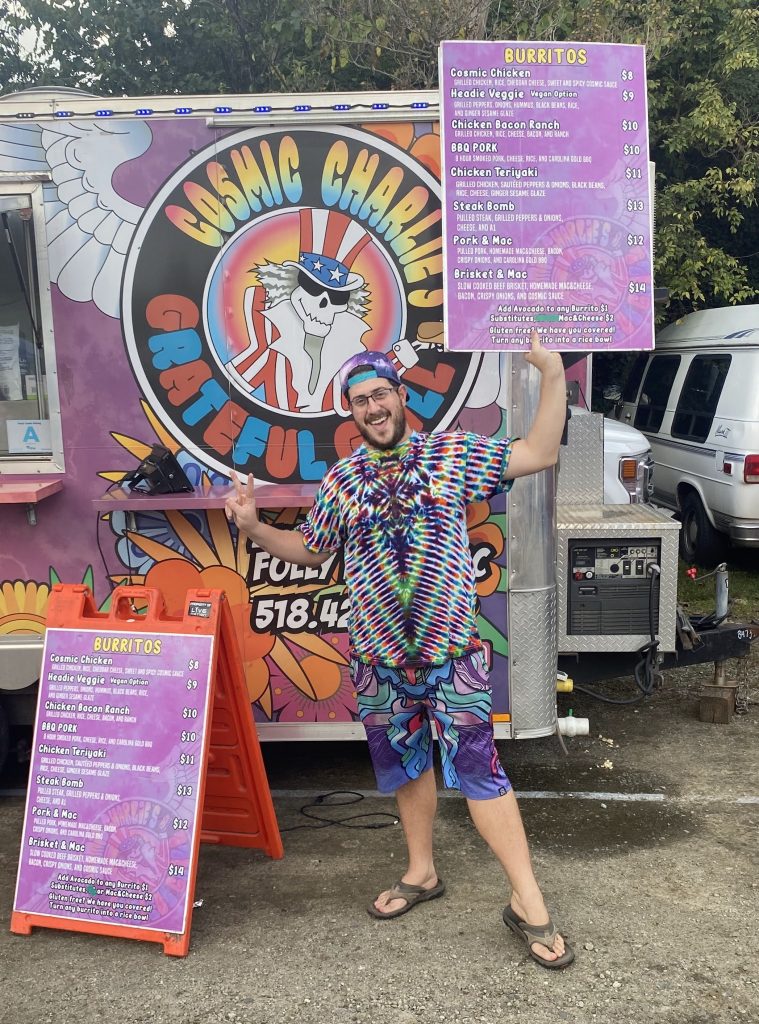 Each stadium D&C visit becomes a center of attraction for varying breeds of Americana. Some folks are just here because their parents were Deadheads, or because it’s now trendy to wear Dead shirts. Others are jazz and blues enthusiasts. Most, however, are here for some “it factor.” An abstract truth and psychedelic essence are at the core of real Americana and at the core of the Grateful Dead’s music. Hunter S. Thompson referred to this as “Real Horatio Alger,” meaning the dirt-road rags-to-riches American dream. The blues turned into a sweaty ‘80s pop spectacle drenched in a hazy silky sheen. The Grateful Dead and the style of their fans represent an ongoing blend of American philosophies, but all roads lead back to the ever-pulsing heart of classic Americana.

The parking lots outside of Dead shows are like an old carnival. All the freaks come out, and everyone is here for the traveling circus. On “the Lot,” people sell food, clothes, arts and crafts and any other sort of substance you might want. 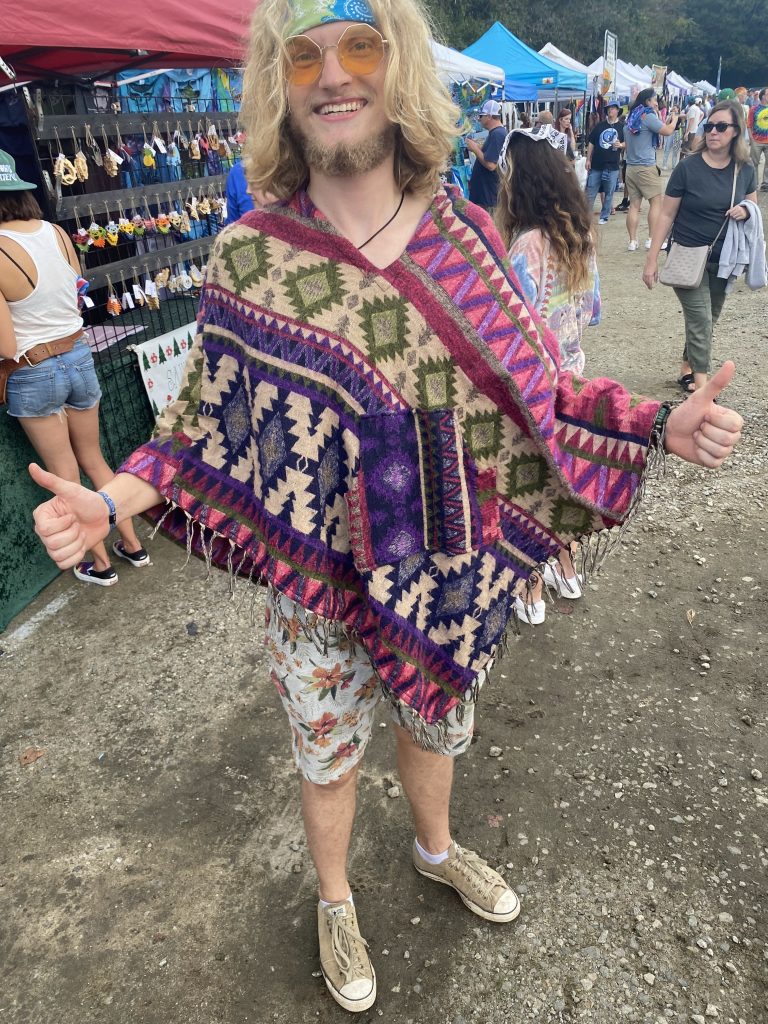 This freak show brings out several popular breeds of fashion, all an expression of American charm. The most famous style is the hippies touting the brightest tie-dyes and headiest musical nods. I caught this dude “Cosmic Charlie” selling loaded mac and cheese on the parking lot. I was tempted but opted for some falafel down the street.

Almost immediately afterward, I ran into an energetic dude named Jesse touting an alternative style of traditional Dead-wear. I love a good poncho. Jerry famously wore a poncho back in the ‘60s and has long been a staple of the Dead scene’s fashion. Both of these outfits emphasize bright yellow, red and purple, but the aggressive tie dye brightness from Cosmic Charlie certainly gives different energy than the more mellow desert vibe of the poncho.

Of course, some Deadheads opt for simple clothing, a humble throwback to how the OG hippies would dress (tie-dye didn’t really become popular until the late 70s). I met this incredibly friendly fan who told me his name was “Jerry Garcia.” While he may not have been the real Jerry, his plain white t-shirt, hair and circular glasses were a clear tribute to Jerry’s own personal style. While other band members frequently wore eccentric shirts and colors, Jerry famously always stuck with plain black shirts most nights. This Jerry’s blue, hand-knit satchel added nice color to the otherwise subdued outfit. 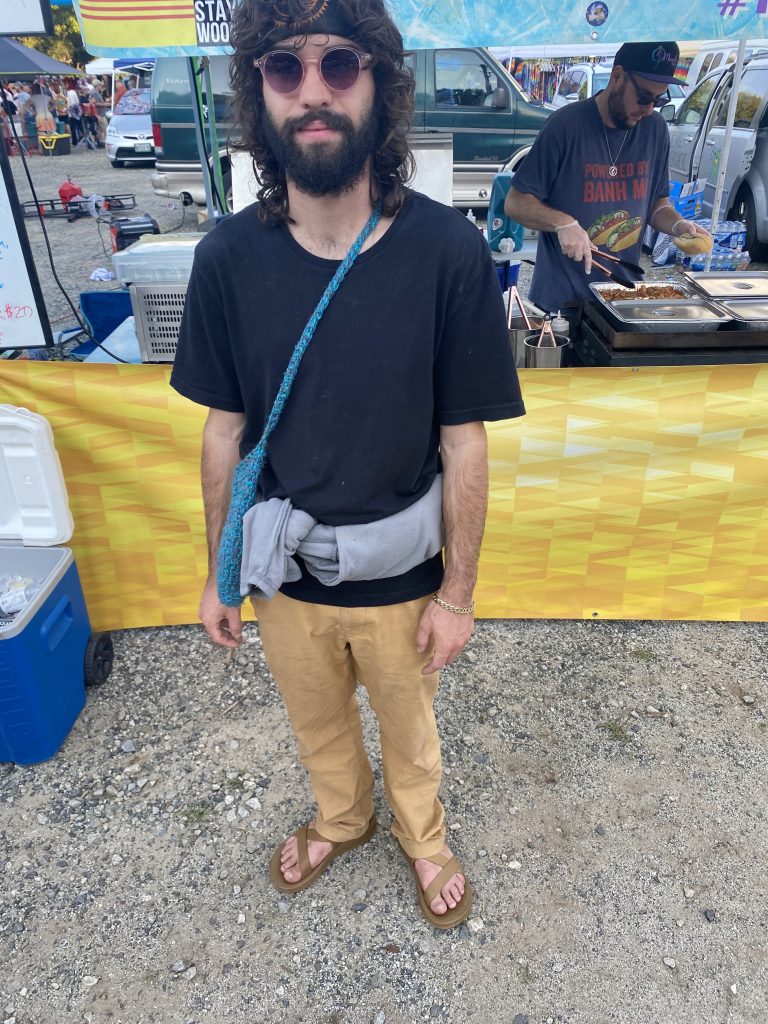 Since the late ‘80s, the Dead fashion has also included a niche of preppy/fraternity dress: polo shirts, short shorts, maybe even some boat shoes, which likely arose due to the popularity of the Dead among college kids. The toxicity of prep culture luckily gets left behind most of the time and is channeled into a crusty Las Vegas-golf-smokers-cough way. 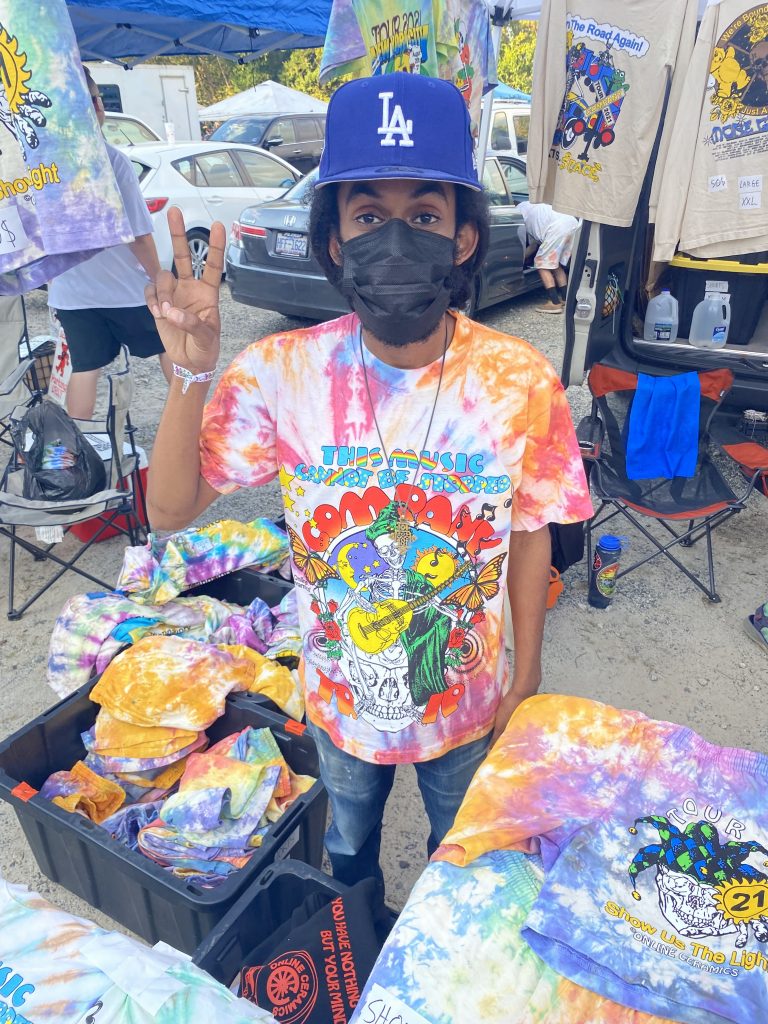 A discussion on contemporary Grateful Dead fashion would not be complete without mentioning the rise of Online Ceramics, one of the more influential and genuine design brands to gain popularity in the late 2010s. OC stands out for their child-like cartoons and unique tie-dyes, as well as the headiest references ranging from A24 films to Ram Dass. They’ve been setting up a booth at every Dead show on this tour, so I was psyched to stop by their tent and say hello. I bought a sick pair of tie-dye cotton shorts made for the Dead and Company summer tour this year.

While waiting in line, I spotted this amazing railroad-inspired person near me. The overalls are both stylish and highly functional for the concert experience, and their green hat actually had what seemed like velcro on it to swap out various designs. 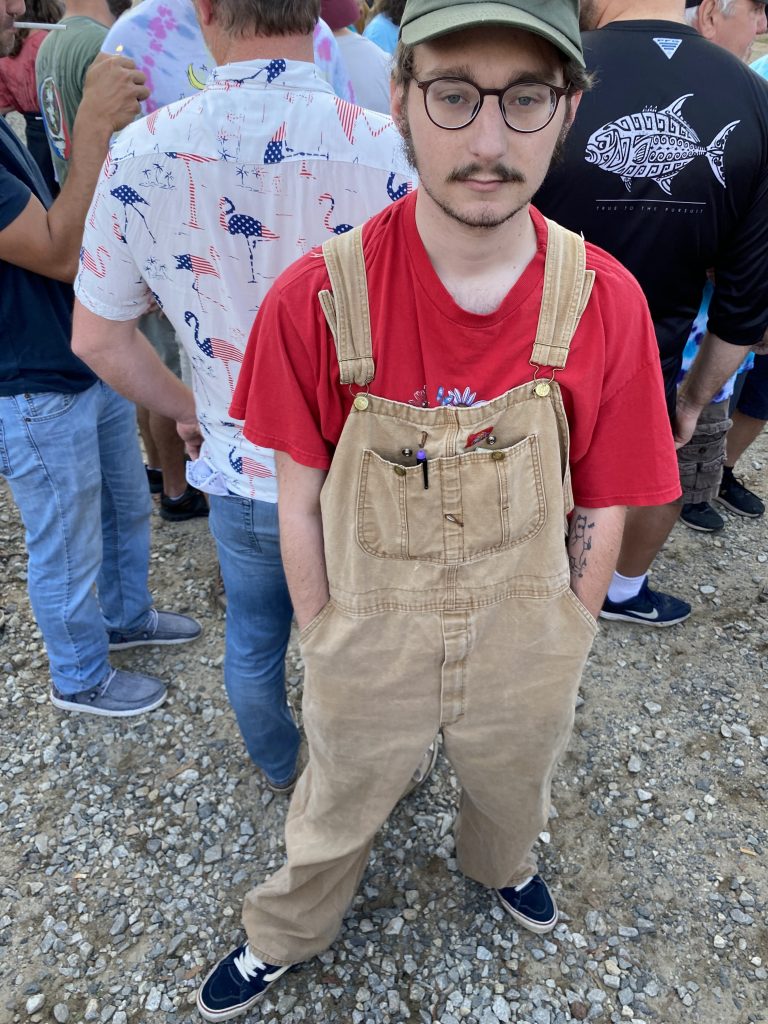 Dead & Company shows are a melting pot of styles, personalities, and backgrounds. The lot is a playground of expression for blending traditional and contemporary styles of Americana, old ideas of what defines American fashion with a 21st century sense of irony and playfulness. While these few fits are definitely only scratching the surface of all of the great clothing worn at the show, they reflect some of the amazing people I had the pleasure of hanging with on the Lot.