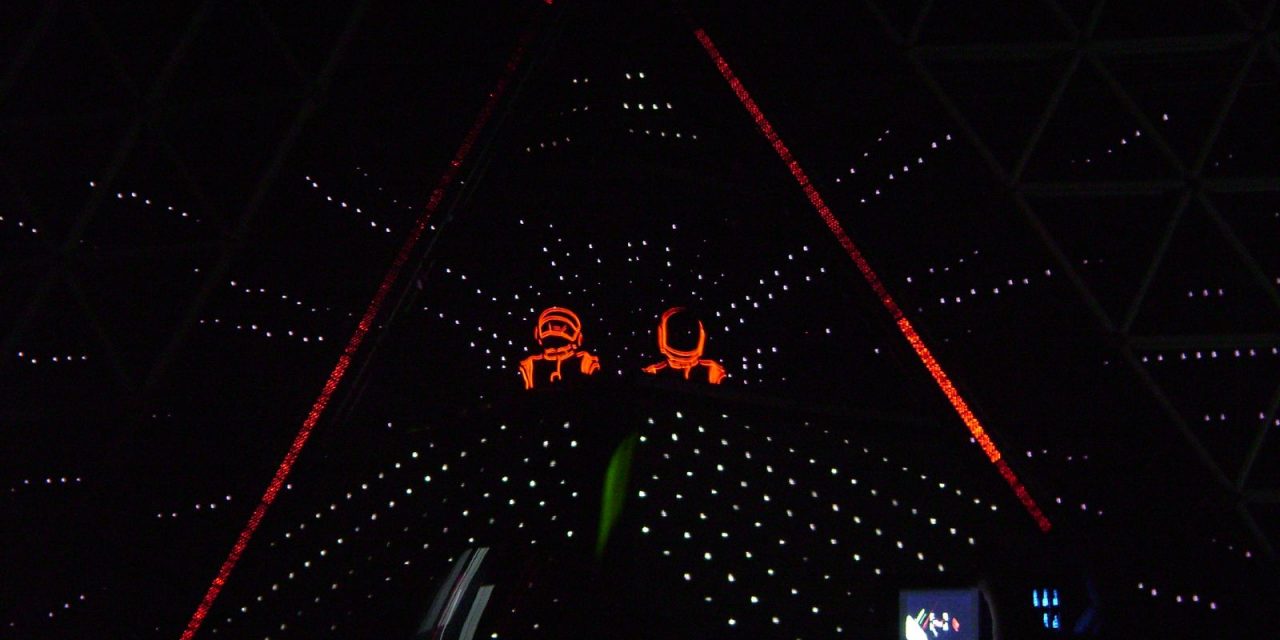 Someone once told me people are born knowing the Beatles’ songs, and that saying also applies to one other group: Daft Punk. Exploding out of the French house scene in the mid ‘90s, Daft Punk, composed of Thomas Bangalter and Guy-Manuel de Homem-Christo, became one of the most influential and enigmatic electronic groups of all time, distinguishing themselves as all-time greats within house, disco, rock and dance. Their legendary tracks are unsung chapters in the pop canon, transcending house music as an electronic sub-genre and transforming into something entirely new. On Feb. 22, the futuristic duo uploaded a YouTube video titled “Epilogue,” which depicted  the bandmates walking through a desert until de Homem-Christo attaches a bomb to Hangalter’s back and he explodes. The clip ends wordlessly with a sunset; alongside a brief press announcement, the video concluded Daft Punk’s 28-year career. With an unmatched talent for sampling, pitch-perfect production and hard funk grooves, Daft Punk will undeniably be regarded as the most influential artists of all time.

Daft Punk may arguably be famous for their chromatic robot helmets, which disguised the pair’s identity. At the center of human bass and drums with electronic synths and vocals is the futuristic pathos of Daft Punk, mixing human sentiments with robot tech.

Daft Punk’s first album, “Homework” (1997), is the best look into their hardcore French house roots, with extended, distorted and intensely pulsating cuts. “Rollin’ & Scratchin’” and “Revolution 909” are prime examples of their raw house and electronic roots without the pop sheen they later became known for. However, “Homework” still features several historic hits like “Da Funk” or “Around the World,” both of which are now dance music staples and the latter of which is a fine sample of Daft Punk’s master style. “Around the World” starts with a subdued main theme, slowly gaining energy and power until breaking open like a cresting wave of clarity and funk. Bright synth touches pop up in every corner and the whole track is pulled by a thumping bassline and the iconic robotic repetition of the words “around the world.” The very activity of dance itself is something ingrained in human nature, yet this passionate and bodily act is propelled by these automatic music-making machines.

Four years after “Homework,” Daft Punk released “Discovery” (2001). The production and sampling throughout this album represent a divine and nearly unmatched level of musical genius. The opener, “One More Time,” is an example of this sampling magic, pulling micro-samples from Eddie John’s “More Spell on You” (1979). The result is a bittersweet, euphoric and bouncing anthem celebrating the power of dance. The first half of this album features numerous other house masterpieces like “Aerodynamic,” “Harder, Better, Faster, Stronger” and “Crescendolls.” However, “Discovery” progresses far beyond simple energetic dance tunes and dives into atmospheric and cerebral house. “Voyager” is a celestial and supersonic trip through space, and in similar fashion, “Veridis Quo” is a wholesome safe space, feeling almost like the rest area in some sci-fi video game. Other tracks like “High Life” or “Face to Face” are incredibly forward-thinking, perfecting the aesthetics of future-funk and vaporwave more than a decade before their real conception as a genre. “Discovery” was also released as the soundtrack to a sci-fi anime film, “Interstella 5555,” which perfectly suits the colorful and futuristic feel of the album. “Discovery” is a high watermark for music as an art form, combining orchestrally grand dance classics with artful, complex and emotional melodies.

In the 10 years following 2001, Daft Punk continued to set the standard for high quality, high fidelity and forward-thinking dance music. The duo’s output stayed fresh, including several remixes and collaboration albums such as “Human After All” (2005) and the “Tron: Legacy” (2010) movie soundtrack. All of these projects saw the duo exploring various electronic realms and influenced the incorporation of electronic club and dance genres into pop, something that remains widely popular. There was also the inventive and influential “Alive 2007,” a recorded live set from the duo’s historic 2007 tour. On this tour, Daft Punk reinvented their concert set, creating a gargantuan pyramid and innovative lighting array upon which to perform. Daft Punk’s wildly theatrical stages set a new standard for complex design and majestic grandiosity expected from 21st-century concerts. 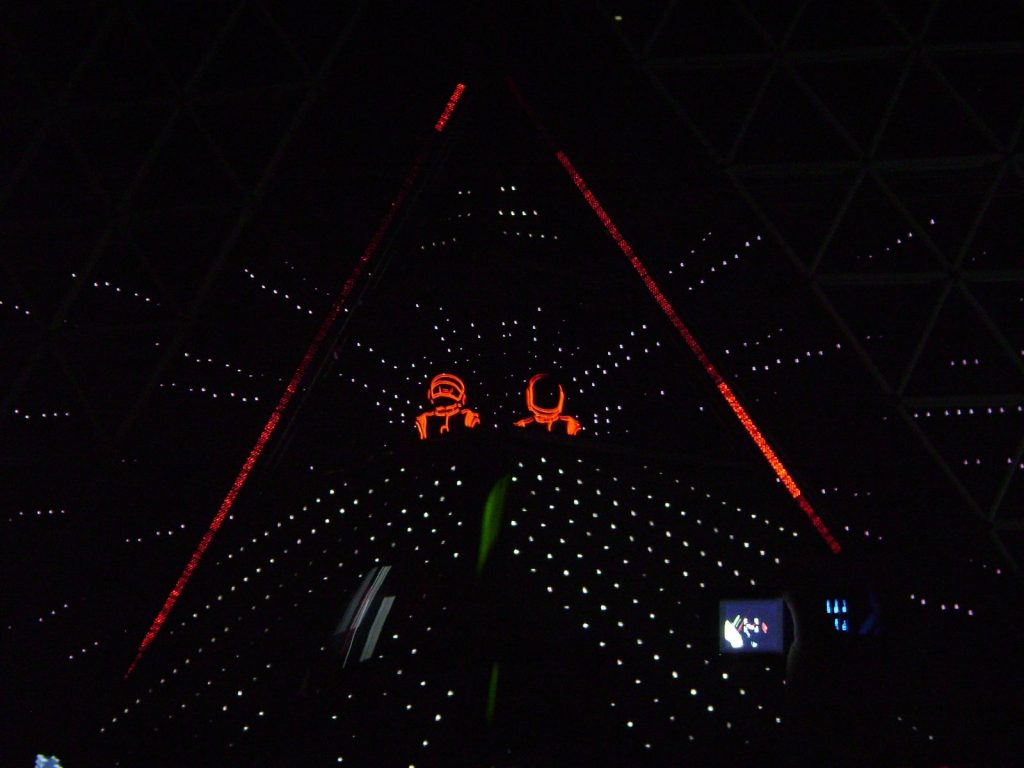 Daft Punk perform at Monterrey during their influential 2007 tour. (sauxeda)

Daft Punk actually finished off their career eight years ago in 2013 with their last studio album, “Random Access Memories,” proving them to be as powerful and relevant as ever. There was the phenomenal “Get Lucky” featuring Pharell Williams and Nile Rodgers which has held up as one of the greatest pop songs of all time. Other songs like “Give Life Back To Music” or “Lose Yourself To Dance” see the group returning to their near-religious celebration of the power of music and dance. Tracks like “Touch” or “Beyond” feature classical orchestration, reminiscent of ‘70s disco aesthetics but revitalized with modern synth-funk instrumentation.

The duo’s influence is impossible to overstate. Nearly every move Daft Punk made left a powerful mark on electronic music and popular music. Artists such as LCD Soundsystem, Panda Bear, Kanye West, Pharell Williams and Skrillex — just to name a few — cite Daft Punk as a foundational influence upon them sonically, visually and philosophically. Whether it’s the robot helmets, shiny suits or retro-futuristic aesthetic, the group’s visual components feel intentionally crafted and genuine. The visual aspect of the robot helmets, designed by Paul Hahn, Alex Courtes and Martin Fougerol was a critical part of their philosophy. For the group, the music and artistry were separate from the creators themselves — their music served as a sacred and safe space for personal expression while their personal lives remained out of the limelight.

For a while, European dance music was considered very cheesy and un-hip, especially within American circles. Daft Punk was unapologetic about their love of dancing, the club scene and their uncompromising vision for the future of music and art, making it cool again to love electronic music and dancing. Whether you’re a lifelong fan or a first-time listener, pay tribute by connecting to your nearest hi-fi sound system and play it loud.