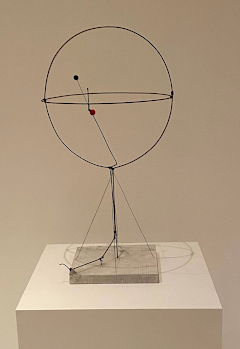 In “Genealogy of Morals,” Friedrich Nietzsche describes the unbearable guilt that  culture and language impart on humans. Our chief method of relief from this guilt, he contends, is to take part in established rituals created by our ancestors. One such way is to visit art museums.

At the outset of the High Museum’s Calder-Picasso exhibition, a prominent wall of text expounds: “The artists’ grandsons Alexander S. C. Rower and Bernard Ruiz-Picasso conceived this exhibition as a compelling conversation….”. As in most museums, this exhibit is a tribute — by visiting this space, we celebrate and validate these famous artists and their achievements, which are deemed canonical by both critics and the public writ large.

At its best, the Calder-Picasso exhibition displays a breadth of works made by two abstract artists from similar time periods. This content efficiently shows the ways in which European artists experimented with form, color and perspective throughout t he 1930s. In some ways, however, certain aspects of the exhibition work against the viewer’s experience. In verbose and lofty descriptions, the exhibition crafts a clear narrative — Picasso and Calder are twin spirits, somehow inspiring each other every step of their careers. These written accompaniments interweave vocabulary and ideas, which, when presented alongside two pieces of art, guide the viewer’s mind toward some enlightening conclusion connecting these two artists. The last sentence of the introduction to the exhibition reads:

“​​They reaffirm the revolutionary contributions of two artists who transformed our

conceptions of form and space-and thus the very definition of art itself.”

We are told that these artists “transformed” our conception of “art itself.” This is nothing less than mystification of the art. Originally co-curated by the grandchildren of these critically acclaimed artists, the exhibition stipulates that viewers should understand how the artists redefined art together. It is important, however, to be mindful of what we see for ourselves and what we’re merely being told to see.

In the first room, viewers are met with a series of Calder’s sketches and small wire statues, as well as two Picasso paintings. From these works, it’s clear that both artists were interested in the circus as a means to explore the human form. Calder’s wire works show thin circus performers bending and twisting their body, while Picasso’s crammed and contorted “Acrobat” thematically follows suit. The room also features some of Calder’s early suspended wire statues, such as “Hercules and Lion” or “Aztec Josephine Baker,” which hang still in the air. As the viewer’s perspective shifts with each movement, the wire arrangements are in flux, recasting themselves into new images. Although this exhibit consists mainly of Calder, the works highlight that two artists were both preoccupied with presenting new ways of seeing the human body.

The next room, titled “Capturing the Void,” details how Calder intentionally started working entirely abstractly with historic details about his early abstract exhibitions. The works flourished when allowed to function on their own; but the forceful hand of the exhibit’s narrative was too obviously felt. Calder’s geometric statues on one wall are all impersonal and elemental, dealing with basic ways of abstracting and observing shapes in space. On the other hand, Picasso’s works all remain focused on the human form. While both participated in abstraction of form in their own separate ways, they did so disparately. The exhibit descriptions, however, imply the opposite.

A side-by-side comparison of Calder’s “Two Spheres Within A Sphere” and Picasso’s “Head of a Man” reveals the artists’ distinct crafts. Calder’s piece is a wire circle with two circles suspended above, while Picasso’s work is an abstracted head of a man, the molding and distortion of which is intense.

I do not attempt to assert that there exist no connections between the two artists and their oeuvres — or that the exhibit is merely a forced montage of disparate works. On the contrary,  Calder and Picasso’s works seem to excellently complement each other at certain points. In Calder’s “Little Yellow Panel,” which is juxtaposed with Picasso’s “Portrait of a Young Girl,” a yellow panel features black shapes dangling in front of it, slowly rotating while suspended in air. The work is highly dynamic, showing how visible objects constantly shift with time and perspective. Similarly, Picasso’s portrait appears to reveal the fleeting geometries of each impressionistic moment. Across Picasso and Calder’s works, the viewer peers from an angle, glimpsing into ephemeral and curvilinear shapes. The description of the Picasso reads, “​​Picasso thus deconstructs and reconfigures the anatomy of a human head into a set of volumes, voids, and planes.” The exhibit’s description places a lens that spoils the viewer’s conception of the pieces, making it seem as if there is a blatant and important connection between the two works which we must clearly see. While Picasso was certainly interested in exploring space and void (as evidenced from his personal writings), the exhibit and its descriptions blatantly create an adulterated, embellished engagement with the two artists’ works.

Unfortunately, much of the rest of the exhibit contains an extraneous amount of  sections or themes. Almost every fourth painting would introduce a new theme or historic moment to which the curators would link Calder and Picasso. These thematic connections were interesting at first, but this curiosity quickly waned as each section was truncated. With smaller sections interspersed throughout, the exhibit’s attempt to show a connection between the two artists felt increasingly empty and cursory.

Despite my lasting cynicism toward the exhibit’s execution and intention, I still wholly enjoyed my time. Picasso’s catalog of art is gargantuan and continually challenging, while Calder’s features a distinct American wartime modernity. These two profound artists are together in Atlanta for a limited time at the High, and I recommend anyone interested in art to check it out — just be mindful of the museum’s guiding hand.