Listening to Your Opponents 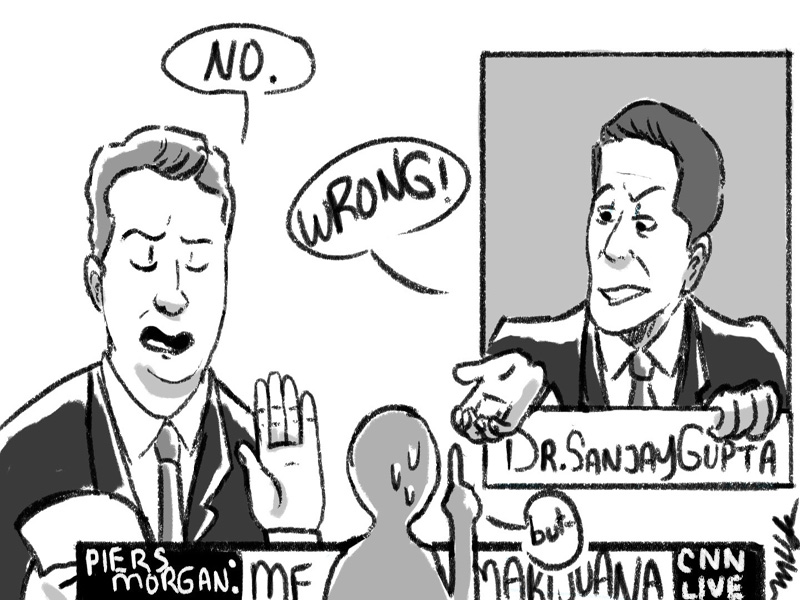 Last August, CNN Chief Medical Correspondent Sanjay Gupta gained a wealth of publicity over a news special he hosted titled “Weed.” The majority of the attention was focused on the fact that Gupta reversed his previously harsh disapproval for marijuana and began to accept and praise it as a positive medical utility. In order to promote the special, Gupta appeared as a guest on the show “Piers Morgan Live.” The interview featured several clips from the special as well as a debate between Gupta, Morgan and Howard Samuels. While most of the commentary on this television interview surrounded both Morgan and Gupta’s admission of having smoked marijuana, nobody seemed to remember anything that was said by Samuels.

Samuels is a recovering drug addict and the CEO of the Hills Treatment Center in Los Angeles, Calif. While Morgan and Gupta promulgated the numerous medical health benefits of marijuana, Samuels offered a legitimate counterargument. He conceded that the medical benefits outlined by Gupta were valid; however, he argued that these points should not be used as evidence for a push towards legalization. Samuels noted that despite the large number of people who would benefit medically from use of marijuana, the number of citizens who would use legalization to abuse the drug would be astronomically higher.

Rather than addressing Samuels’ argument, Gupta proceeded to accuse him of not understanding the benefits outlined and then continued to make multiple points about how the drug could be advantageously used in a medical setting. For nine minutes, Gupta and Morgan subverted, denounced and poked fun at every argument Samuels presented. The two of them seemed to be working as a team, and given that they are both employees of the same corporation, this angle should come as no surprise.

This is a colossal issue, and one that is not only pervasive in the news community but throughout the entire political environment.

The way that this televised debate was conducted is indeed a major concern.

It has become a common occurrence for debaters to focus entirely on belittling one another, such that they rarely heed the counterarguments they are working to invalidate. This style compounds the competitive nature of debate, focusing on a determinant victor, rather than an approach towards a consensus. This bastardization of the democratic process has become second nature to multiple branches of politics and is the defining aspect of modern congressional quorum. Rather than working toward understanding one another’s views and compromising, politicians are becoming increasingly concerned with merely denouncing their contraries and/or halting their progress. Sometimes it even gets personal.

Samuels was publicly embarrassed and belittled to the point of making his valid argument seem laughable. Furthermore, the use of the interview as a platform for promoting Gupta’s special demonstrates that this misconduct may have been intentional. The biggest problem with this specific example is that Samuels made an argument with reasonable merit that needs to be addressed. When Gupta and Morgan fail to make any comment on this issue and just work towards promoting their own agendas, the issue gets thrown into the wind and often forgotten by the public. Nobody seemed to argue on behalf of Samuels because CNN did not want him to appear supportable. His agenda was unfortunately contrary to that of the corporation that hosted him.

The liberal treatment of marijuana goes hand in hand with the tone of Gupta’s television special, and heeding arguments against the drug would not have been an advantageous way for CNN to promote it.

This is a very specific incident; however, a brief exposure of recent political affairs will yield an increasing pattern of this method of debate.

As a country, we are at a point where we are going to have to decide if we want to actually listen to one another or to just try and get what we want.

After all, self-interest gets our country nowhere.

Robert Weisblatt is a College junior from Belle Mead, N.J.