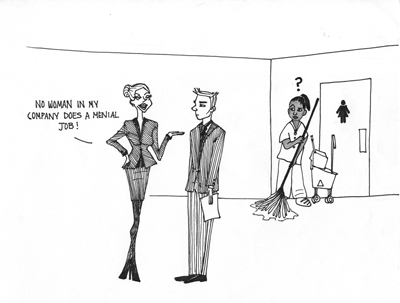 The word – ahem, ideology – “feminism” is a bad one. So many people I’ve met try to stray away from calling themselves a “feminist” because of the nasty implications that come with doing so.

A few things come to many people’s minds when they think of the feminist ideology: militant, hairy, difficult, man-hater, etc. But really, why is it that in the 21st century this stigma continues to persist in the minds of young men and women? Why is it that when I write on my resume that I am the Co-Producer for “The Vagina Monologues,” I get told to take it off because otherwise I won’t get the job? And why is it that I have to add the qualifier “intersectional” when I’m discussing my personal feminist perspective? Well, let me explain.

I’m guilty of it – I did remove parts of my activist work when I applied to a few “business” internships. Even in an article I wrote in Sept. 2012 titled “PETA: Animals Before Women,” I wrote that “I wouldn’t pigeonhole myself as a feminist,” and I did that because I was scared of being attacked. I’m not proud of it, but unfortunately, the sad reality is that feminism is not perceived as a good thing.

There are these convoluted images floating throughout the internet and in literature that frankly misinterpret and generalize the movement(s), packaging it as one kind of ideology where the sole purpose is to murder all men and not shave legs.

And I’m not even trying to be extreme – many of my friends have gotten into heated debates with me as to why they don’t want to call themselves a feminist, arguing that it’s an extremist ideology with a lot of ramifications.

Lately, I’ve been trying to figure out why in our day and age people continue to feel this way, and I think I figured it out. People are yelling at feminists for all the wrong reasons.

In the early 1900s, the first wave of feminism tainted the minds of those who did not believe in a woman’s right to vote. This is because these so-called feminists were positing their agenda on a classist and racist platform. It’s hard, though, being a marginalized human being, and I understand that sometimes in order to advance your own agenda, you must throw other movements under the bus and seek support by those who believe in things you may or may not agree with. It’s selfish, but at times necessary, especially during a time period in which progress was on the brink of happening.

I understand but I don’t agree with this bourgeois method of activism. For example, the marginalization of women’s rights through the 15th Amendment, which prohibits states from depriving any citizen the right to vote regardless of their race, color or previous servitude (i.e. freed slaves now had the right to vote), activated elitism and racism in some women’s rights advocates. Activists Elizabeth Cady Stanton and Susan B. Anthony had to seek alliances with racist Democrats, specifically George Train, to advance their agenda. They even went so far to say that black men should not be elevated over women of wealth. This is where the problem of class and race came into play: some women’s rights activists felt superior to lower-class, black men, perpetuating a singular view of equal rights, classism and ethnocentrism.

This is just one example of a bifurcation in the women’s rights movement. I’m not delegitimizing first-wave feminism, considering it set a necessary precedent for future feminist movements like reproductive rights and gender equity.

However, it’s important to see why feminism has historically been tainted with classism and anti-black rhetoric. Furthermore, according to Elsa Barkley Brown, Associate Professor of History and Women’s Studies at the University of Maryland, feminism in women’s history and studies have omitted the struggles and experiences of minority women, specifically black women.

Feminism implies middle-class white women because, historically speaking, that’s what it was. There is a separation in women’s concerns and race concerns that persists today with many people prioritizing one over the other, and I won’t stand for it. Where were the voices of Asian American women? The Chicano women? The Native American women? These minority groups have been silenced for far too long and it’s about time we talk about their experiences, too.

So my question stands: why can’t we all work together? Feminism should not be qualified, be that intersectional, industrial, black, eco, queer, etc.

Therefore, I propose a shift in consciousness, where feminism advocates the equality of all species (yes, that means animals!), where feminism isn’t a “bad word” that is stigmatized, where I can stand proudly and cry at the top of mountains that we should all work as a collective to change the oppressive structures of the status quo and where we all recognize that we must live in a post-modernist society in order to be all-inclusive.

I urge you to no longer be afraid of being a feminist, because if you’re for equality, that’s just what you are. After all, we’re all just humans who have the ability to actively deconstruct false interpretations of feminism, and we can only do this by educating ourselves about the true and false aspects of it.

Editorials Editor and President of Feminists in Action Priyanka Krishnamurthy is a College junior from Coppell, Texas.