Listening to the Legendary Heart of ‘Glass’ 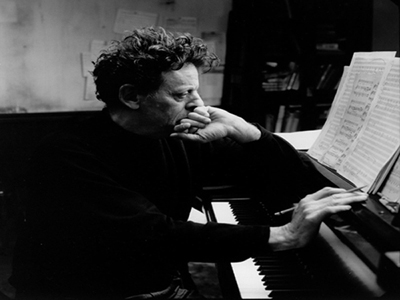 With the recent performances by Paul Simon and His Holiness the Dalai Lama soon to arrive, it’s hard to imagine that our campus could attract any more inspiring guests. However, among all these icons, I was most excited about the Sept. 25 arrival of renowned American composer Philip Glass.

Throughout his three-day visit to Emory, Glass interacted with students and faculty in the music, dance and film departments. Among other events, Glass delivered a “creativity conversation” and a full performance with accompaniment from violinist Tim Fain, best known as the violinist onscreen and on the soundtrack of the 2010 feature film “Black Swan.”

During his creativity conversation with Richard Prior, senior lecturer in the music department and conductor of the Emory Symphony Orchestra, Glass shared his sage advice with an air of brusque wit. He recounted his days as a student in Paris studying under his grant from the Fulbright Scholar Program. This led to a slew of amusing and motivating anecdotes, which often led to a tangent.

Glass’ music is typically described as minimalist, a genre that entails sustained rhythm, very gradual change and the frequent use of musical motifs.

However, despite this label, he said that by 1981, the music he produced was hardly minimalist. In fact, when asked what kind of music he composes, he simply responded  “theater music,” which refers to his work on operas, ballets and major motion pictures such as “The Illusionist” in 2006.

According to Glass, the average person seems to resonate with his collaboration on films more than his other work. “I’m not going to say I write string quartets,” Glass joked. “I mean, what is that?” Glass said that 75 percent of his music is written for dances, films and operas.

Glass reminded Prior as well as the audience that music is about listening, especially during the creation process.

“The fundamental activity of the composer is to listen,” he said. According to Glass, with a trained ear, listening happens after, during and even before a note is played.

“Degrees are easy to get. The technique is harder,” Glass said while speaking about his earliest experiences with composing. He then commented that one can only develop personal style after he or she has mastered the technique.

Much of Glass’ advice could be applied to more than just the music majors in attendance. After receiving a degree, it is up to the student to gain experience. Only half-jokingly Glass assured his audience that with enough desperation, you will eventually accomplish something.

Prior also inquired as to why Glass’ “String Quartet No. 5” had garnered so much recognition. Glass speculated that it might be because of its intensely emotional background. Though Glass’ ideal day entails composing for hours, before the creation of “String Quartet No. 5” the death of a loved one prevented him from composing for a month. This kind of deep, personal connection to his work is what makes Glass’ music so unforgettable.

That same memorability was proven at his sold out showcase in the Emerson Concert Hall on the evening of Sept. 27. Glass played some of his most recognizable works, including the beautifully haunting “Metamorphosis No. 4” and “Etude No. 2.”

Curved over the piano, with posture that suggested countless hours in this same position, Glass was in his element. His piano solos were powerful and lingering, and his duets with Tim Fain resembled a carefully choreographed dance. Both artists’ bodies moved seamlessly with the composition, feeling the intensity of the piece in individual yet complimentary ways.

The audience could see Glass’ personality and sense of humor creep into the showcase. In the 1980s, Glass collaborated with his late friend, the famous poet Allen Ginsberg, on “Wichita Vortex Sutra.”

The piece was an artful melding of Glass’ poignant piano composition and Ginsberg’s excited and humorous recitation of an original anti-war poem.

When Ginsberg died in 1997, Glass said that for a long time he could not imagine performing the piece without him.

However, he eventually found the vitality to share the brilliance of the piece again, a development that the Emory crowd was fortunate enough to experience.

The performance elicited a few chuckles, followed by a standing ovation from the audience.

It was an amazing and unique experience to hear such an accomplished musician play his own original work. All of Glass’ compositions possess a similar emotional quality. After each last note resounded, there was a moment of silence before the audience erupted into applause. Once there was time enough for a man in the front rows to utter the word “beautiful” before the crowd applauded.

Glass played each of his pieces stunningly, but beyond that, he openly appreciated the performances by Fain, nodding his head in satisfaction as Fain played.

“That guy can play violin,” Glass remarked with a grin as Fain left the stage.

At the close of the showcase, when Glass announced that he and Fain would each be playing once more piece, the man sitting to my left actually clenched his fists in delight and muttered a hushed exclamation of victory. Needless to say, Glass has an enthusiastic and devoted fan base here at Emory.