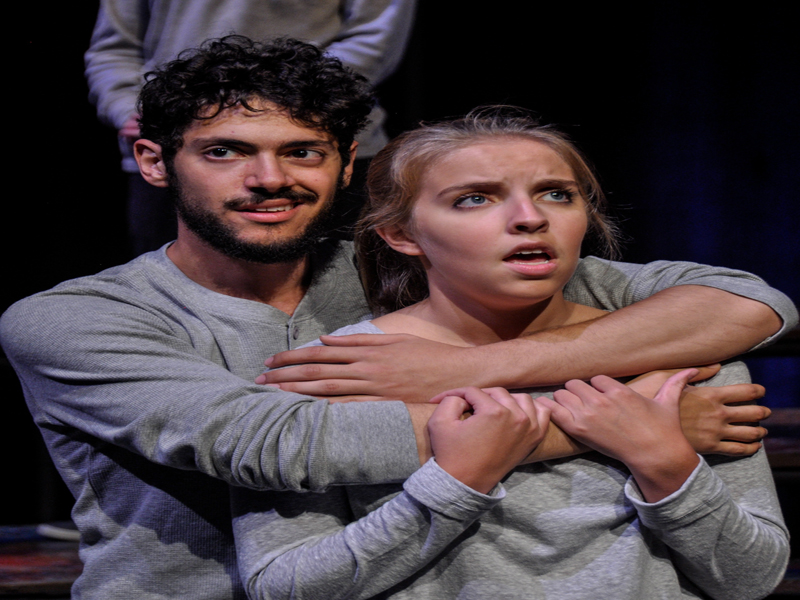 At the center of this musical intro stood College senior and the evening’s DJ, Cody Read, blasting a unique introduction to I am not that I play (gender and disguise), a Shakespeare-meets-modern performance adapted and directed by Chair and Professor of Theater Studies, Tim McDonough.

I am not that I play (gender and disguise), which opened on Sept. 26 and runs through Oct. 6, examines the deception of past Shakespearean performances, which granted the roles of women to men. It toys with this idea so that the leading ladies of Shakespeare’s Two Gentlemen of Verona, The Merchant of Venice, As You Like It, Twelfth Night and Cymbeline mask their genders beneath boyish jackets, ill-fitting Elizabethan bottoms and, to the great amusement of the audience, a jock strap.

And what is this gender reversal for?  Why, for these brawny women to obtain an insider’s scoop on their lovers. Both wives suspicious of their husbands’ affections and women suffering from unrequited love take center stage, as do the symbolic rings that each of them possess.

In a ploy of espionage, the ultimate truth (both external and from within) is revealed as Shakespearian female protagonists Julia, Portia, Rosalind, Viola and Imogen embark on a journey that goes far beyond the superficial composition of one’s body and their lovers’ treatment of each of their rings: the grander journey involves learning where you stand in a society built on the dominance of one’s outer being. The ability to stray from the prim and proper behavior bestowed and expected of Elizabethan ladies provides a segue to this ultimate, as well as home-hitting, truth.

Though the modernity of the musical interludes ranged from Nat King Cole’s “L-O-V-E” to the background of LMFAO’s “Party Rock Anthem,” the dances were Elizabethan. The cast received instruction from Associate Professor John Ammerman, an Elizabethan movement coach, and Atlanta-based choreographer Susan Eldridge, an Elizabethan dance instructor, in preparation for the public performances. This era-faithful guidance shone through with each side step, twirl and curtsy performed by the cast.

As College freshman Carys Meyer, the fresh face of The Merchant of Venice‘s Portia, described the show’s creation: “Tim [McDonough] had a distinct vision for the play, but allowed us to discover our characters on our own.”

It was that distinct vision that allowed the cast of I am not that I play (gender and disguise) to break the fourth wall and enter the audience in a manner that incorporated the viewer in the play. Mere feet away from my seat, thespians firmly cried out their lines. The annunciations left me breathless. And the emotion beneath each Shakespearean stanza re-envisioned the plain pages of early english literature.

And, alas, after the denouement, this breaking of the fourth wall led to an open invitation for audience members to join the flamboyant, Elizabethan-attired actors onstage. The performance space became an exhibition of their well-rehearsed dance moves, the colorful beams of light playing across the stage while hip-hop beats guided the audience’s painfully non-choreographed steps.

I am not that I play (gender and disguise) is a casual showstopper, playing off the concept of gender roles and their adamant strain on modern-day society. Yet, it avoided the overbearing demeanor to which many plays with larger-than-life notions seem to fall prey.

With casual attire playfully paired with Elizabethan garb and humorous verses, this play takes a unique approach to such a pressing topic as gender societal norms. Still, it remained relatable as well as memorable. In fact, during my trek from the nighttime showing to my homestead at Longstreet, I couldn’t help but hum a classic feministic tune with a tiny, Shakespearean twist: “I am woman, hear me … hear ye.”  Welcome to Shakespeare reborn.