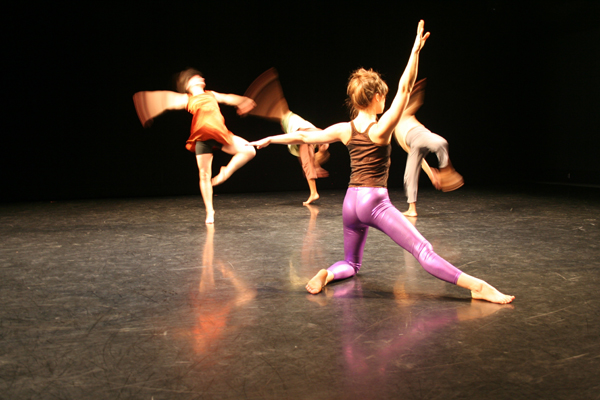 Throughout the vast majority of Catellier Dance Projects’ simply-titled “E,” I had no idea what was happening. And it was perfect.

Going into the performance, I knew that the title’s singular letter “E” stood for energy, but that was about all I (or, for that matter, anyone) had been told about this show. And that one-word explanation didn’t provide a lot of context. What kind of energy was the title meant to imply? Energy can mean a myriad of things: usable power, dynamic quality, exertion of force, the base for being able to perform work…you get the idea.

As it turns out, Catellier Dance Projects (CDP) meant all of those definitions.

Following 2011’s time-focused “Tempo” and this spring’s space-based “The Final Frontier,” CDP created “E” as the third of a series of four dance performances centered on each of the four elements of dance. Conceived and choreographed by Emory dance department faculty member Gregory Catellier, “E” was quietly brilliant–it took on a gigantic concept in a concrete way, miraculously succeeding in compressing a notion that embodies the source of all action into one comprehensible performance.

Catellier opened the show by explaining to the audience that creating a show about energy had inspired him to make the show entirely carbon neutral, an announcement that was met with enthusiastic applause. So in that vein, the show began with Catellier dancing with the stage lit by one sole light, which was powered by riding a bike. But after just a few minutes of that carbon neutral performance, the light went out. And just like that, we were back to releasing plenty of carbon in the name of dance.

For the next hour, a quintet of dancers moved through the stage, expressing absolutely every kind of energy imaginable. The dancers’ respective energies complemented, clashed, perfected, and struggled with one another. And their variety was nothing if not impressive.

At first glance, it was clear that the dancers were different: in terms of race, gender, size, shape. But upon more mindful inspection, they were also unmistakably different in their movement styles: some of them moved smoothly, some moved emphatically, some moved viscerally. Yet, they each managed to communicate whatever kind of energy they set their mind to.

Dynamic energy was conveyed through all forms: music, lighting, costumes, backgrounds, and, of course, movement. Generally, these mediums all work together to create one specific feeling. But in the case of “E,” the show was all about defying those norms. The sparkly, psychedelic costumes would conflict with serious, emotive music, or happy, bright lighting would contrast against solemn movement.

Though those inconsistencies ran the risk of making the performance discordant or overbearing, Catellier was able to keep things just foreign enough to be thought-provoking, but also just familiar enough to be comfortable.

In one particularly noteworthy section, the dancers walked onstage one by one, and asked each other, “How are you doing?” Each of them responded, “Great,” in markedly different manners. One dancer rolled her eyes and said the word with a twinge of sarcasm; another with a fist pump and a big smile.

With the dancers in place, the world’s most iconic song about happiness began: Katrina and the Waves’ “Walking on Sunshine.” But the choreography could not have been more contrary–the dancers looked truly miserable, barely moving, as they gazed at the audience with melancholy expressions, eventually making their way down to the floor, only to lie on their stomachs and bury their heads in their hands. Every single element onstage evoked sheer glee–except for the movement, which was so emotive that it cancelled out everything else.

“E” concluded as three CDP dancers lined themselves up onstage, one after another articulating some form of excitement: a cheer, applause, a grin, anything. They moved through the line, each quite literally taking their turn to be excited, making those pedestrian movements as choreographed as any traditional dance step. The final round of excitement led into the three of them applauding together–applause which the audience joined in on.

And throughout all of this activity, understudies Hannah Frankel (’12C) and College junior Kevin Huang were onstage, in the upstage right corner, riding a bike and running on a treadmill. So even between sections of “E,” while there was no dancing happening onstage, there was still palpable energy. And that movement, albeit simple and routine, captivated your attention, if only for a minute.

And maybe that’s the message of what was happening during “E,” even though it wasn’t particularly apparent during the performance. No matter what was happening–whatever the feeling or situation or sensation or state of affairs, they always managed to keep moving.