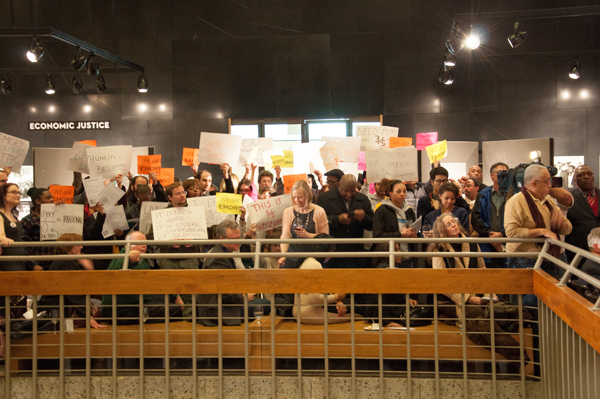 The Southern Christian Leadership Conference’s (SCLC) exhibit, titled “And the Struggle Continues,” chronicles the efforts of Dr. Martin Luther King, Jr. and his contemporaries in achieving desegregation, gaining suffrage and dismantling systematic discrimination in the United States. The event, which began at 6 p.m., included speeches from civil rights leaders who were contemporaries of King.

The exhibit comes to campus at a time when local and national groups are outraged over Wagner’s use of the Three-Fifths Compromise as an example of political compromise in a column for Emory Magazine. The clause was an agreement made between the Northern and Southern states in 1787 and stated that only three-fifths of the slave population would be counted for purposes of taxation and voting representation. Faculty voted to censure Wagner on Wednesday.

At 5:30 p.m. Friday evening, approximately 30 students convened at Asbury Circle with flyers and signs with phrases such as “I am NOT an afterthought” and “I deserve 5/5 respect.” Protestors consisted of members of the Student Revisioning Committee (SRC) and the National Association for the Advancement of Colored People (NAACP), among others.

The protestors marched silently from Asbury Circle to the exhibit in the Schatten Gallery and Jones Room at Woodruff Library.

“We’re here to show our solidarity against what – at least I personally feel, but I think a lot of us feel – is a shameless co-optation of the legacy of the civil rights movement by James Wagner,” said Patrick Blanchfield, sixth-year Laney Graduate School student.

Both Blanchfield and NAACP members said they did not wish to disrupt the opening of the exhibition.

“We will continue to fight against the systematic disenfranchise and marginalization of students and faculty at Emory and dismantle the culture of apathy and ignorance ingrained in Emory’s community,” said Kayla Hearst, President of Emory’s NAACP.

Upon arriving, the protestors stood in a circle away from the exhibit holding their signs, awaiting the arrival of Wagner.

“As long as they’re respectful of the event, I don’t have a problem with it,” said Rich Mendola, senior vice provost of library services and digital scholarship. “SCLC is in the spirit of protest after all.”

The event itself drew a couple hundred Atlanta residents and Emory community members. As guests began to congregate in the Schatten Gallery in anticipation of the evening’s speakers, the protestors gathered in the back holding their signs high to send their message to Wagner. Wagner’s arrival at 7 p.m. prompted the beginning of the speeches.

“The exhibition raises the question ‘well, just how far have we come?’ and the second question is ‘how far do we have to go?'” Wagner said in his speech.

He answered his own question.

“I personally have a long way to go, and I pledge myself toward working toward that just society that we all seek.”

The atmosphere shifted to admiration with loud applause and hollers of approval as Congressman John Lewis, a venerated member of the African American and Atlanta community,  stepped up to the podium.

“The ideas that the SCLC struggled for and Martin Luther King, Jr. died for are still being debated today in the Congress, in the courts, in legislatures, in the press and at dinner tables around the country,” Lewis said.

Civil rights leader and former President and CEO of SCLC Charles Steele, Jr. described how the SCLC forged a relationship with Emory University in 2005 and how the effort to gain equality endures.

Steele recalled the story of A. Philip Randolf imploring President Franklin Roosevelt to desegregate public services like buses and water fountains, to which Roosevelt replied, “Make me do it.” Steele consequently ended his speech shouting, “I promise you one thing, we’re gonna make you do it.

The idea that modern civil rights leaders have a long way to go to achieve King’s ideal society was a theme of the evening as Dorothy Cotton, SCLC’s educational director, began her speech by singing a line from a song from the civil rights era.

Cotton described her experiences working with King on the Citizenship Education Program, which helped disenfranchised individuals gain the right to vote. Her speech highlighted the individual efforts of civil rights leaders during the movement and charged her audience in a call to action.

At one point, Cotton broke into song and members of the audience joined her. She concluded her speech by discussing the effects of divisions among people.

“[King] taught us what did it mean to love those who hate you,” she said. “Once you get anybody in a category and you measure each group against somebody else we do some weird things.”

Bernard Lafayette, a distinguished scholar-in-residence at the Candler School of Theology, told anecdotes about his experience during the freedom riders movement, which protested segregation on bus systems. He stressed the importance of educating people about the civil rights movement, as he himself teaches a class at Emory.

Lafayette underscored the importance of continuing to strive for equality, referencing the student protestors.

The protestors filtered out of the gallery as the speeches concluded.