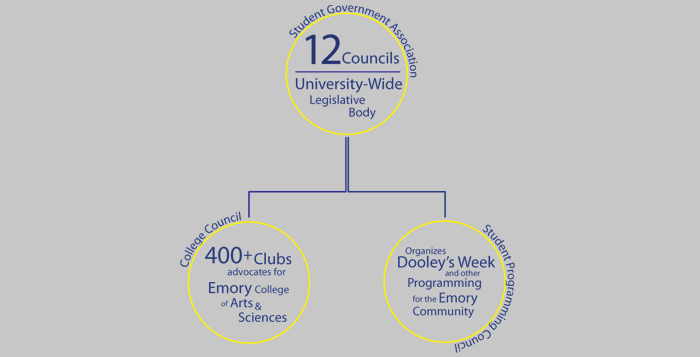 Stronger communication both within student government and outwardly to Emory community members was a common theme discussed among the presidential and vice presidential candidates for College Council (CC) and the Student Government Association (SGA) during the Wheel‘s annual candidate debate on Tuesday.

Candidates were called up to the stage by position and were given a time limit to answer specific questions about their platforms, rebut their opponents’ statements and answer questions that the audience asked via Twitter using the hashtag “#wheeldebates.”

Darby and Varadi, whose debate was last, began their debate by discussing current issues facing SGA.

Varadi began by citing issues with efficiency in meetings and transparency in the SGA actions, and Darby said that too often communication from SGA followed a “decision first, engage later” approach.

“Whenever a large decision comes before SGA, I want to ensure that it is subjected to at least a week of public scrutiny, guaranteed by the constitution, with an open forum of debate,” Darby said.

Both candidates said communication is the number one priority for SGA.

“We need to bridge this communication gap that exists between not only students and SGA, but also students and the administration,” Varadi said. “The SGA is a liaison between the student body and administrators.”

Darby pointed to his proposal to change the SGA website to create a student-oriented dashboard of actions that makes it easier to find what students need.

“I think SGA should be a resource, not a roadblock,” Darby said. “Students should feel comfortable approaching SGA.”

Varadi and Darby each have two years’ experience in SGA and hope to continue building on their previous initiatives.

As a freshman legislator and Vice President of Communications, Darby assisted in the establishment of the SGA website and the purchase of the EmoryLife Network of websites for student organizations, while Varadi worked on the encumbered laundry initiative in addition to serving as Secretary and Speaker of the Legislature.

For next year, Darby advocated for a campus safety app, more representation for marginalized communities and an increased technological presence. Varadi is seeking a printing stipend for students, more shuttles to the Clairmont campus and Emory shuttles to the airport around breaks.

Varadi also pointed out that as the only female candidate running for an SGA leadership position, she would bring a different perspective to SGA.

Both candidates are against the amendments to the SGA constitution that will be voted on in a campus-wide referendum next week, citing communication concerns.

“I think that having a serious conversation with the Emory community about these changes is vital,” Darby said. “At this point, it might be wise to vote no on the referendum in order to discuss the nuances of these issues and their implications.”

Varadi agreed, emphasizing the need to bridge the communication gap and citing what she says was a lack of communication regarding the fee split bill as an example.

“I think that SGA needs to step back and really reflect on our role as an organization,” Varadi said.

For their closing statements, Varadi reiterated her experience working with the president and vice president and a need for transparency, efficiency and services, and Darby promised to continue using his skills to serve the student body, engage with vibrant and diverse parts of campus and advocate for student spaces.

“I want to put the ‘student’ back in Student Government Association,” Darby said.

The biggest priority for SGA next year varied for each of the candidates, with Tilwa focusing on individuals not affiliated with chartered organizations being able to present bills, Lack desiring a change in the external outlook of SGA and Chang advertising what goes on “behind the scenes” to increase student involvement.

Chang touted his “outsider status” – he has never served on SGA – as a reason why he can be an effective vice president. Lack advocated for another task force to examine SGA procedures, and Tilwa desired to fill pockets of the community where advocacy is missing.

In regards to the upcoming referendum on constitutional amendments, Lack and Chang were against the amendment while Tilwa said it helped define the role of SGA on campus.

“[This amendment] is a very bad idea that goes against the entire idea of student government,” Lack said. “Student government is for students, and we should get to decide our own policies.”

Tilwa countered that the amendment is important to validating SGA’s necessity on campus.

All three candidates offered condemnation of December’s fee split bill which changed the structure of funding for University-Wide Organizations (UWOs) such as the Media Council and Outdoor Emory Organization.

Each candidate also offered major policy initiatives they would implement if elected.

Lack proposed a forum to discuss controversial issues that would partner with the Barkley Forum as well as a database of course syllabi so “students know what they are getting in to,” while Tilwa advocated for a community outreach position to act as a liaison to underrepresented groups.

Chang spoke on revisiting the controversial fee split bill and giving students a chance to continue conversations with SGA after the election season.

Lack agreed with Chang’s opinion on the fee split bill, citing a disconnect between the SGA and the student body, and called for an action committee that serves as a forum to make meaningful changes to policy.

“We can’t believe we’re better or more knowledgeable than students, especially when it comes to funding for student events,” Lack said.

Chang said he was against the committee idea, saying it served as a crutch for not having dialogue and limited engagement with the community.

In their closing statements, each candidate highlighted what set them apart as a candidate: Lack said he has a unique vision rooted in policy discussion, Tilwa said he would use the independence of the position to cater to multiple needs and Chang said he will continue engagement with the community past elections.

For the CC presidential debate, Chan and Kazi began by addressing what they thought was the biggest concern about Emory’s student body.

Chan said bureaucracy is the biggest obstacle, and his experience as vice president and a sophomore legislator has focused on making everyone’s voices heard in student government.

“From your emails that you send me, I make sure you get in touch with the right people,” Chan said. “We can really make changes where the student body can see a really clear vision for campus.”

“Instead of making changes as individuals, or members of executive board, we need committees of people who are on CC and people that aren’t so we can add that extra perspective,” Kazi said. “We need the changes to be catered toward the organizations we’re supposed to be serving.”

Both candidates spoke on ways in which CC can improve. Kazi pointed to a lack of understanding into the processes involved in bill writing and funding, while Chan highlighted a deficit in communication, especially regarding what CC does.

“College Council is not an ATM,” Chan said. “We put on a lot of events throughout the year, such as Social Justice Week, State of Race and CultureShock.”

In response to a question about the CultureShock event’s organization, Chan said “there is always going to be a lot of kinks” with a new event and apologized for what he called a “lackluster implementation.”

Kazi said the issue was communication between CC and participating clubs, claiming that most people didn’t know the agenda for the day and that there was an “overstuff[ed]” program in the day and a lack of input into programming ideas.

Since Weinstein is the only candidate for vice president, she read her candidate statement then answered a question pulled from her platform.

Weinstein’s first point in her statement revolved around collaboration between organizations on campus, citing a president’s forum she is planning for April.

Her second point was communication, both within CC ranks and externally to the College.

Weinstein said one avenue to increase engagement is through existing social media channels and the CC website.

“[Our Facebook page] only has about 1,000 likes, and that is not representative of the entire Emory community,” Weinstein said. “The [CC] Twitter account has only 130 followers, and that is really sad.”

Weinstein’s final point included working with Emory’s Transportation and Parking Services to purchase a GPS-based app for SafeRide that enables students to wait indoors for late-night transportation, the Emory Experience shuttles and a bike-share initiative.

Regarding the necessity of increased communication between CC executive members and the legislature, Weinstein pointed to what she called “mixed communications” regarding the CultureShock event as an example of an area for improvement.

“During these [executive board] meetings there’s a lot that happens, whether it’s passing bills or giving money to organizations,” Weinstein said. “The people who are elected to [the legislature] should definitely know what’s going on [with the executive board].”

Elections will take place online at www.emory.edu/vote from Monday, March 31 through Wednesday, April 2.