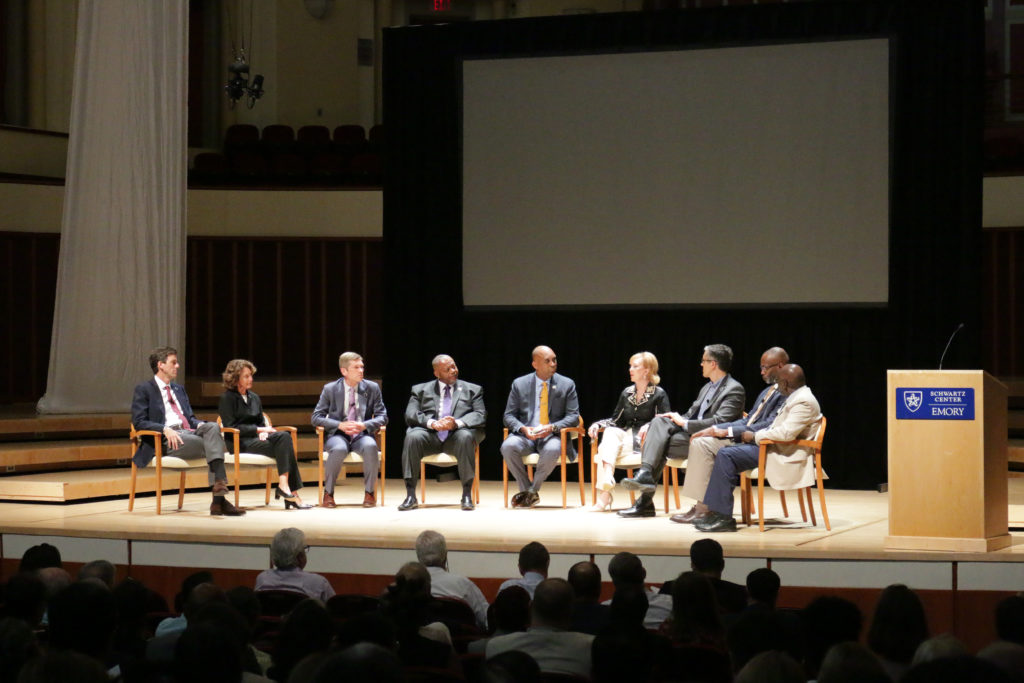 The framework says Emory will work to attract and retain faculty; build an inclusive community for students; be a leader in the sciences and humanities; and increase engagement with Atlanta. Sterk and other administrators have presented similar goals at prior public events but the framework combines the ideas into one plan.

Sterk said the framework is the result of a process that began more than three years ago, when Emory collected input from community members about the University’s next strategic goals through its “Thinking and Acting Strategically” survey in 2015.

Sterk said the feedback indicated a desire for more widespread local and global recognition as an “eminent research university.”

At the event announcing the framework, McBride led a faculty panel to discuss what the implementation of “One Emory” meant for their separate disciplines. Panelists included Dean of Emory College of Arts and Sciences Michael A. Elliott, Chair of the Department of History Joseph Crespino, Emory School of Medicine Professor of Otolaryngology Charles Moore and other professors.

“Faculty Excellence,” the first of four “pillars” in the strategic framework, focuses on attracting and supporting top scholars and building an inclusive intellectual community.

Crespino agreed that diversity in race, gender and ideology is key to faculty excellence.

The second pillar, “Academic Community of Choice,” aims to foster a “compelling student experience” that would ensure schooling is financially accessible for more students. At the panel, Elliott discussed breaking down barriers between undergraduate divisional schools.

“[The undergraduate deans] have been working to take down the administrative barriers, align policies and bring resources together to allow all undergraduates full access to the resources of the University,” Elliott said. “No academic resource at the University should be unavailable to an undergraduate because of the particular school to which he or she is enrolled.”

Sterk introduced the third pillar, “Innovative Scholarship and Creative Expression,” as a call for Emory to “address the 21st century’s challenges through increased discovery and intellectual imagination.”

Assistant Professor of Film and Media Studies Daniel Reynolds said he saw the third pillar as a way to spark creativity on campus.

“Any ways in which the University could encourage, support or create frameworks for interdisciplinary research, scholarship and teaching, as well as just in conversation would be extremely productive,” Reynolds said.

The final pillar, titled “Atlanta as a Gateway to the World,” focuses on Emory’s engagement with Atlanta. The University was annexed into Atlanta in January 2018.

“I believe we can engage in … serious issues that surround us, such as alleviating poverty, improving public health, improving primary and secondary education or enabling locally controlled economic development,” Moore said.

A performance by cellist Okorie Johnson and four students from Emory Dance concluded the event.

Emory will produce a strategic framework booklet for Spring 2019 and will continue outreach to campus groups for the rest of the semester, according to a timeline on the One Emory website.