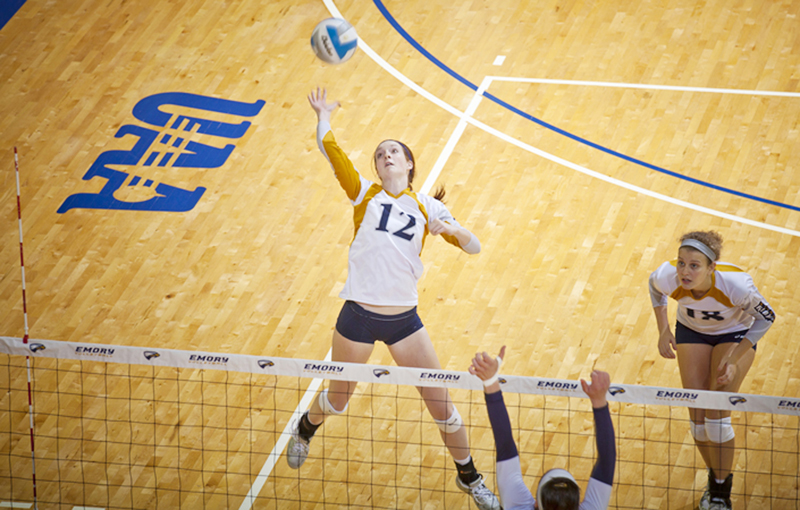 The No. 6-ranked Emory volleyball squad completed its regular season this past weekend, as the team travelled to Brandeis University (Mass.), the host of the UAA Championships. The Eagles were hoping to cap off an impressive regular season with a second consecutive conference championship.

The team did its part in the first two matches, defeating Case Western Reserve University (Ohio) and then Washington University in St. Louis in the semifinals. The No. 20-ranked University of Chicago abruptly halted the team’s run in the championship game, which is the first time a school other than Emory and Wash. U won the UAA Championships since 1988.

Emory began the UAA championship tournament with an opening round bout with the 15-15 Case Western Spartans. The Eagles won in straight sets (25-23, 25-10, 25-23), led by juniors Leah Jacobs and Kate Bowman, who each finished with double-digit kills. Emory also held a commanding 53-38 advantage in digs, led by sophomore Taylor Erwin’s 22 digs.

Emory advanced to the semifinals and faced its rival, the No. 8-ranked 26-5 Wash U Bears. Emory won with conviction, defeating the Bears in straight sets (25-23, 26-24, 25-16) and advanced to the UAA Championship Match. The squad displayed its resilience in the match against the Bears, battling down 22-19 in the second set to come back and win the set. Led by Jacobs’s 12 kills and freshman Jessica Holler’s seven blocks, the Eagles led in every category, including hitting percentage and digs.

The Emory volleyball team met its match in the UAA Championship game, matching up with the 25-10 University of Chicago Maroons. After winning the first set, the Eagles dropped the next three, as the Maroons captured the title.

This was the second time the Eagles had faced the Maroons this season with Chicago winning both 3-1. Chicago outhit Emory .237 to .197, while barely leading in digs 84-81. Leading the Eagles’ balanced offensive effort were Jacobs, Holler, freshman Sarah Maher and junior Cat McGrath, who each finished with double-digit kills. Finishing what was a strong season, Erwin had 22 digs, her 12th effort with 20 or more digs on the season.

McDowell also praised Jacobs for her play this weekend: “(She) took some huge swings at the biggest times and got kills for us. She is really playing great volleyball right now!”

Jacobs, rather than focus on her individual performance, would rather look forward to the team’s next challenge, the NCAA tournament.

“Our team goal since the beginning was to win a national championship. Our regular season insured we would make the tournament, but the only thing that matters now is the future,” Jacobs wrote in an email to the Wheel.

The Eagles found out on Monday at 11 a.m. that they had secured an at-large bid to the tournament. Emory will host an opening-round regional that includes the Eagles, Agnes Scott College, Berry College, and Washington & Lee University (Va.).

Jacobs alluded to the urgency and pressure that comes with the NCAA tournament: “We have six games we need to win in order to reach our goal, and that’s all that matters. That is what’s left of our season. Every game could be our last, so we need to play as such. If we do, we win. It’s as simple as that.”

Asked to evaluate her squad’s season, McDowell said: “This has been an extremely successful regular season, going 30-4.  We play an extremely tough schedule and won 30 matches.”

She continued: “The best is yet to come. We are primed and ready to start the NCAA tourney next weekend.”

Leading the team in total kills were juniors Jacobs and Bowman, closely followed by Holler and McGrath. Sophomore Sydney Miles led the squad with an impressive total of 1220 assists, averaging over 10 assists per game. Erwin led the team in digs by a huge margin – she finished with 555 total digs, with the next closest teammate finishing with over 200 less.

The Eagles will open play this Friday at the Woodruff P.E. Center against Agnes Scott College. Agnes Scott was just 11-17 on the season but earned an automatic bid after winning their conference tournament. The winner of that game will take on the winner of Washington & Lee and Berry for the right to advance to the NCAA quarterfinals in Holland, Mich.