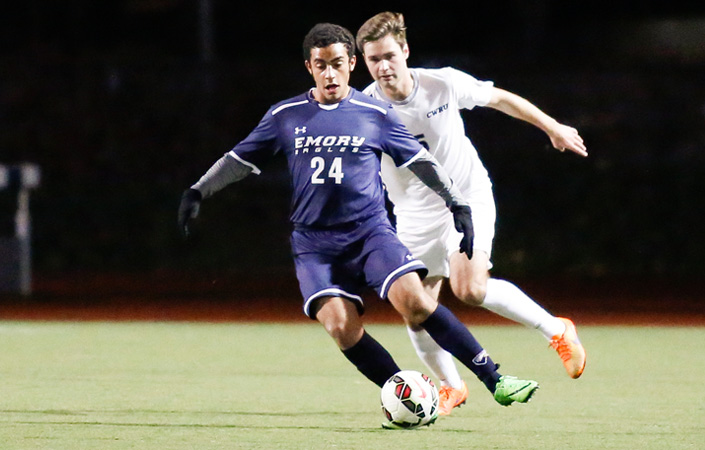 In a road weekend heavy with the weight of postseason hopes, Emory’s men’s soccer returned home in uncertain fashion, losing 2-0 in their first match against Brandeis University (Mass.) (10-4-3) Friday before winning a close 1-0 battle over New York University (8-7-2).

The weekend results dropped Emory (10-4-1) to No. 3 in the University Athletic Association (UAA) standings, just behind No. 2 Brandeis. No. 1 University of Chicago (Ill.) clinched the league title with a win over Carnegie Mellon University (Pa.) Sunday, dashing the Eagles’ hopes of a UAA title.

In their first match, the Eagles faced not only the Brandeis University Judges, but also the cold, rainy conditions of Waltham, Mass. The Eagles fell down early when Brandeis junior midfielder Christian Hernandez managed to get his head on a free kick in the 26th minute and give the Judges the 1-0 lead.

Unfortunately, the Eagles never managed to pressure the Judges, who completely shut down the high-tempo Eagle offense in the second half.

“You have to give Brandeis credit, because they played really well and stopped us from playing a possession game, which is what we like to play,” Head Coach Sonny Travis said.

After firing off six shots in the first half, the Judges prevented the Eagles from registering a single shot in the second. The dagger came in the 76th minute when senior defender Thales Brito finished a header off a corner kick to give the Judges a firm 2-0 victory.

“We definitely had some good chances in the second, but once they got the second goal, they broke the momentum to the end,” sophomore defender Aidan Datene said.

For the Eagles, Friday’s performance was frustrating.

“Brandeis definitely played better than us,” sophomore midfielder Moustafa Khattab said. “Brandeis is a good team, but we all agreed after the game that that was our worst performance of the year.”

In dire need of a win, the Eagles traveled to Riverdale, N.Y., to take on the N.Y.U. Violets Sunday. The match was dominated by Emory, but N.Y.U. managed to hang tight thanks in large part to an incredible performance by Violets’ senior goalkeeper Lucas Doucette, who notched 10 saves on the day to deny the Eagles any breathing room.

“He is the best goalkeeper in the conference,” Travis said. “He had a tremendous game, and [if not for him] I think it could have been 2-0 or 3-0 for us.”

Fortunately for the Eagles, a strong defensive effort, combined with a much needed goal from Khattab, proved enough to edge the Eagles to a 1-0 victory.

The scoring play began with junior center midfielder Adam Ferguson, who switched the ball across the pitch to Khattab, who proceeded to settle it, cut inside and finish into the corner.

The goal was Khattab’s second game-winner on the season, his first during the match against Washington University in St. Louis (Mo.) Oct. 8., Travis said.

“[Khattab’s] goal against N.Y.U. was outstanding. It was a big time goal against a very good keeper,” Travis said. “It made [N.Y.U.] come out of their shell defensively, which helped, because if they were able to sit back and defend, they were going to be very effective with their keeper.”

The Eagles’ regular season will conclude next Saturday when the Eagles travel to Rochester University (N.Y.) (8-4-3).

“I think we will carry the momentum [from Sunday] moving forward, and I think we will step up against Rochester knowing that our season rides on that game,” Datene said.