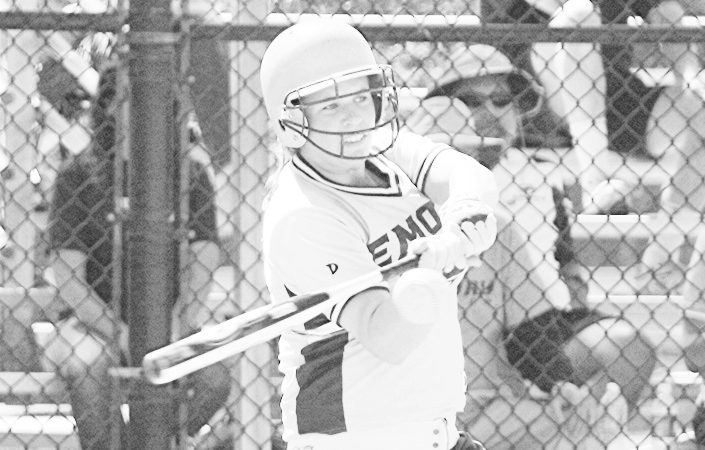 Megan Light (’14C) takes a swing for the Eagles. On Thursday, Light won the NCAA Today’s Top 10 Award, in recognition of her success both on and off the field. Photo courtesy of Emory Athletics.

On Thursday, the NCAA announced that former Emory All-American softball player Megan Light (’14C) was selected for the NCAA Today’s Top 10 Award. The award “recognizes former student-athletes for their successes on the fields and courts, in the classroom and in the community,” according to the NCAA. The 10 recipients of the award will be honored at the Honors Celebration during the NCAA Convention in January.

Light maintained an impressive career during her years at Emory and has continued to receive honors since graduation. She was recently one of nine finalists for the 2014 NCAA Woman of the Year Award.

Sports Information Director John Farina not only nominated Light for the Woman of the Year, but also Today’s Top 10.

“I felt that the criteria for the Woman of the Year closely aligned with the criteria of the Top 10, so it seemed like a natural progression for her to get both,” Farina said.

During her time on Emory’s softball team, Light managed to receive three-time All-American honors, and was the first athlete in the history of the program to receive a pair of first-team honors. Light also claimed four-time All-University Athletic Association (UAA) First Team honors, and was named the conference’s Most Outstanding Player three times.

Light also shined in the classroom, being named the Capital One Division III Academic All-American of the Year in softball and receiving the NCAA Postgraduate Scholarship Award. In 2013, she received Second Team Academic All-America recognition and earned her spot on the Academic All-District Team three times.

At Emory, Light graduated with a 3.96 GPA, majoring in anthropology and human biology. She was a recipient of the 100 Senior Honorary, an award given to up to 100 seniors for being outstanding students and members of the community.

Off the field and outside of academia, Light demonstrated leadership through her extracurricular activities. She served as the softball team’s representative on Emory’s campus Student-Athlete Advisory Committee. She volunteered at a homeless shelter and through Global Health Action, working with donors of the Left-Behind Children program in China. She volunteered at the Hohoe District Hospital in Ghana during the summer of 2013.

Light recently was awarded the Emory 2014 Brittain Award, which is Emory’s highest student honor, given to a graduate who exemplifies great service to both Emory and the larger community and world.

“Megan is great to work with and shines in athletics, academics and her involvement in her community. She is definitely a role model to other students,” Farina said.