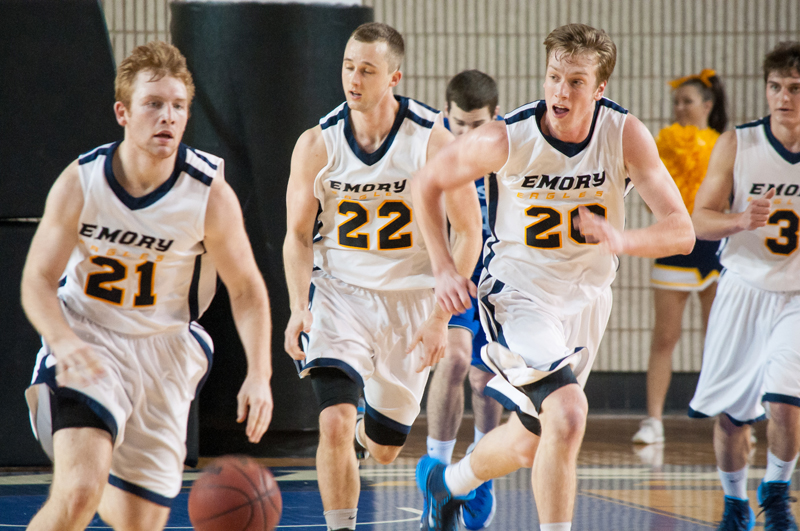 In a pair of road University Athletic Association (UAA) conference games over the weekend, the men’s basketball team topped New York University on Friday and defeated Brandeis University (Mass.) on Sunday. After the two conference victories, the Eagles improved to 12-4 on the season, with an impressive 4-1 record in UAA games.

On Friday afternoon, the Eagles matched up with the 11-3 NYU Violets for Emory’s first UAA road game. The game was closely contested, with both squads battling back and forth the whole way. Led by junior Alex Foster’s career-high 21 points and senior Jake Davis’ 20 points, the Eagles were able to squeak past the Violets, winning 86-82.

In the first half, Emory rebounded from an early deficit to go on an 11-4 run and take a 41-32 lead. Davis and fellow senior McPherson Moore scored 14 and 11 points, respectively, as the Eagles went into halftime with a 45-39 lead.

In the second half, the Violets started off strong, capitalizing on strong offense and defense to go on an 11-1 run to take the lead 51-50. Down two with less than half of the period remaining, the Eagles used a run of their own, rattling off ten straight points to take a 71-63 lead with just over four minutes left in the game. The Violets quickly responded, scoring five straight points to cut Emory’s lead to three points, which would be the closest NYU would get for the rest of the game. Emory went on a 9-3 run, and was able to hold off the hard-charging Violets to win the game.

The Eagles were effective shooting the ball in the affair, shooting 51.8 percent – led by Foster, who was 7-10 from the field. In addition to Foster and Davis, Moore scored 14 points while sophomore Davis Rao tallied 12 points. Defensively, the Eagles held the Violets to 41.9 percent shooting in addition to forcing 11 turnovers. NYU controlled the boards in the game, grabbing 48 to Emory’s 31, some of which led to the Violets’ 28 second-chance points.

Asked about his career-high scoring effort in the game, Foster wrote: “With our opponents keyed in on Jake Davis and McPherson Moore, there are opportunities for other guys to step up and knock down shots.”

He continued, “on our team, we’ve got a bunch of players that could put up 20 on any given night. Friday night was my turn.”

On Sunday afternoon, Emory played the 9-6 Brandeis Judges, who entered the game 1-3 in UAA play. On the road for the second straight game, the Eagles, led by junior Michael Florin’s career-high 26 points, were able to win another close game, this time winning 94-88.

This victory for Head Coach Jason Zimmerman was a particularly special one as Zimmerman won his 103rd game as Emory head coach, tying the school record held by Brett Zuver (1998-99 through 2006-07).

The first half was an offensive showcase for both squads, as Emory took the lead 52-51 behind 66.7 percent shooting from the field. Florin scored 16 of his 26 in the period, while Davis tallied 12 points on 5-7 shooting.

The second half featured stronger defense from both teams, as Emory and Brandeis displayed the resilience that is characteristic of UAA opponents.

With Brandeis up 75-73 with just over half of the period to go, the Eagles responded, scoring seven unanswered points to take a five-point lead. Up 82-79 with seven minutes remaining, the Eagles would not surrender another field goal the rest of the way, riding their strong defense to put away the tough Judges 94-88.

Emory shot very well from the floor during the game, shooting 57.6 percent, led by Florin who was 13-19 from the field and Davis who shot 7-12 en route to 20 points, his fourth straight outing of 20 or more points. Also scoring in double figures was Moore with 18 and Foster with 11. Unlike the game at NYU, the Eagles controlled the boards, outrebounding the Judges 40-27.

“My teammates encouraged me throughout the game and gave me confidence to score the ball,” Foster said of his breakout performance.

Both Foster and Florin credited trust as one of the key factors that allowed them to win two close games on the road.

“We all take pride in going on the road and beating teams on their home court,” Foster wrote. “It takes all 15 guys to do that. We all believe in each other and trust our teammates to deliver when their number is called.”

The Eagles’ next game is this Friday at 8 p.m. in the WoodPEC against the University of Chicago.