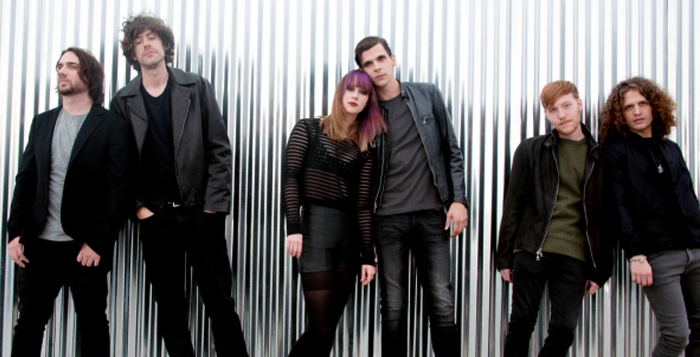 Structuring their punk-pop sound from their first album, Celabrasion, Sleeper Agent recently released About Last Night, an album that is both pristine and polished. From heartbreak to victory, Sleeper Agent takes listeners on a unified magical musical journey.

The opening song, “Be Brave,” is euphoniously energetic and enchantingly encouraging despite lyrics such as “I’ve been feeling so lonesome that I could cry.” Sleeper Agent has created waves with “Waves,” the standout song from the album. The song, about a private apocalypse, has a catchy chorus and brightly sparkles with raw vocals and graceful musicianship.

“Haunting Me,” which was originally intended to be a Jackson 5 tribute, is subtly deep and hauntingly harmonious. The album concludes with “Sweetheart,” a Latin-flared, power-popping song inspired by a W.B. Yeats poem.

About Last Night certainly highlights Sleeper Agent’s lyrical and instrumental growth and versatility as a band. Sleeper Agent is currently on tour and will play in Atlanta on July 24.

Tony Smith answered some questions via phone, discussing the meaning behind Sleeper Agent’s name, who they would love to collaborate with and activities they enjoy outside of music.

Benazir Wehelie: What is the meaning behind the name, Sleeper Agent?

Tony Smith: Sleeper Agent is taken from a 2005 TV show called “Battlestar Galactica.”They’re the enemies on the TV show.

BW: You recently released the album, About Last Night. As a sextet band, what was the creative process like when putting together the album?

TS: In a lot of ways it’s very relieving because if I ever get stuck on a song, then I know I have five other people to help me work through it. Generally, I’ll start the song and then I’ll bring it on acoustic guitar to everybody and they’ll try to weigh in and craft their own parts around it. And that’s how we do it.

BW: What is the meaning behind “Waves”?

TS: “Waves” is pretty much our experiences on our first two tours, getting to see everything from New York to California. And kind of like our experiences being on the radio and just watching the reality of touring and what it really is as opposed to what I romanticized it to be as a younger teenager.

BW: You are from Bowling Green, Kentucky. How does the music scene in Bowling Green differ from other cities you have had the chance to perform in?

TS: We pretty much get the same high energy show whether in Bowling Green or Los Angeles. I guess the only thing that really changes is the way people respond to it. Some regions are a little more laid back and some areas are a little more wild.

BW: Do you prefer more laid back or more outgoing audiences?

TS: I definitely prefer outgoing because we give so much and then if we get a lot in return, it just makes us give even harder.

TS: We’re friends, we grew up with them in our teen years. Two of us did, and went to the same schools.

BW: Rolling Stone described you as “Shaggy Kentucky kids whose songs are sweet, fizzy and combustible as a can of shook soda.” How would you describe Sleeper Agent?

BW: Your influences include the Pixies and the Black Lips. What specifically about these bands do you love?

TS: That was earlier on in our first record. The Pixies have always just been great song writers, while having this incredible energy and this other-world kind of snarl and great interplay between each other. The Black Lips is just a fun live show. They put on one of the best live shows I’ve ever seen.

BW: If you could collaborate with any other band or musician, who would you choose and what kind of music would you make?

TS: I always thought it would be fun to do something in hip-hop, a hip-hop collaboration and there’s a list upon list of people I’d love to work with in that realm.

BW: Do you have a favorite hip-hop song or musician?

BW: What are your favorite things to do together outside of music?

TS: We all love going to eat together and going to the movies, going to bars. Anything that’s kind of in that realm we always enjoy doing. The other day we went to the beach, so that was good.

BW: You are performing in Atlanta in July. What can audiences look forward to from your live performances?

TS: We’ve always had a really good experience in Atlanta. One of our best shows was in Atlanta when the crowd was singing the lyrics louder than we were, so it was very shocking. We’re always very excited to play Atlanta to get that same vibe going again, so you’ll see us very excited and happy to be back in Atlanta. And we’ll put on a hell of show!