The 51st legislature of the Student Government Association (SGA) convened Monday night to vote on a bill that would establish the Student Concerns Committee and to discuss the results of a survey that assessed the experience of Oxford continuees’ transition to the Atlanta campus.

Thirteen legislators unanimously passed Bill 51sl27 to form the SGA Student Concerns Committee, which would gather campus leaders and concerned students every two weeks to address student issues such as public safety, academic advising, campus dining and sustainability. The bill characterizes the committee as an advising group to SGA that “will help SGA address student issues and develop possible solutions.”

The committee would be composed of 20 undergraduate students who are representative of every division, and have no voting power. Students must apply in the fall to join the committee. The SGA vice president of student experience would chair the committee and select the members from the applicant pool, according to the bill. SGA plans to convene the committee next fall.

“[The committee could] get asked about certain initiatives that are going on in SGA and how the public perception would see it and [could also] bring in their own initiatives and … [work] with SGA members on the initiative,” Chief of Staff Mario Karras (17Ox, 19B) said.

“I think the incentive to participate and do good work on the committee is the fact that [committee members] are concerned students [that] are getting connected with the student legislation and are getting connected with the people on the committee,” Graham said. “Those things are not a formal introduction to SGA, but it definitely serves as a way for people who didn’t get involved in their first year to learn more about who we are and what we’re doing and maybe get involved in subsequent years or election cycles.”

“Having the Student Concerns Committee will allow us to increase the scope and the scale of SGA and allow us to get those initiatives that you all as legislators may not necessarily have heard or that you may have missed,” Armstrong said. “It increases the presence of SGA on the campus as well.”

Karras presented the bill, which was submitted by Vice President of Student Experience Daniella Moreno-Kaste (19C), Freshman Representative Alice Bodge (21C), Graham and Karras. The bill is an updated version of Bill 51sl22, which legislators two weeks ago said should be revised for specificity.

Oxford Continuee Representative Muhammad Naveed (17Ox, 19C) shared the results of an Oxford Continuee Survey that was sent out two weeks ago to assess how juniors and seniors rated the success of their  transition from Oxford campus to the Atlanta campus. The survey assessed whether Oxford continuees were satisfied with the events happening on the Atlanta campus, if they felt included in those events and if they were aware of the diversity resources and facilities available to them. Of the 900 Oxford continuees who received the survey, 35 students responded.

Naveed said he will try to better publicize events for continuees in the future. 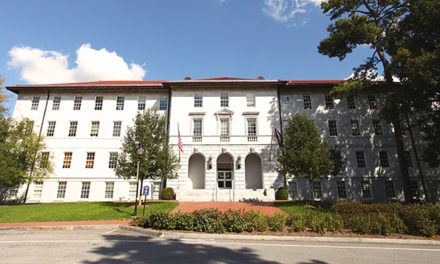