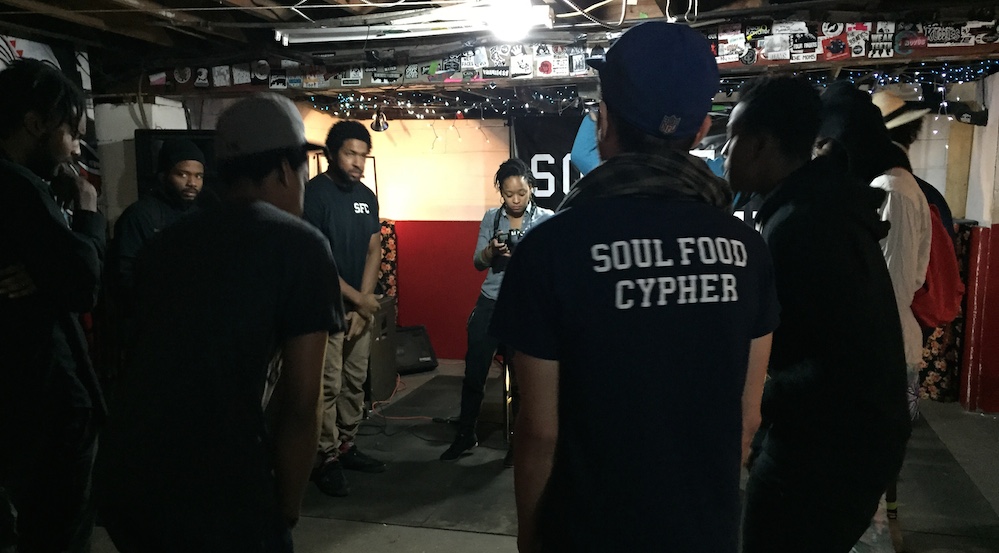 In the tiny basement of WonderRoot, a community arts center in East Atlanta, a group of people forms a tight-knit circle in the center of the room. Spectators surround the circle and line the sides of the art-adorned and sticker-clad walls. The lights are low. A DJ spins a steady hip-hop beat that makes it impossible not to nod along. Members of the circle take turns rhyming over the music.

“If you ain’t freestylin’, you should take your ass home,” emcee Troy Lynch, who goes by moniker Luke Legacy, jokingly dares the crowd.

It’s the fourth Sunday of the month and Soul Food Cypher is hosting its first event of the year. Established in 2012, Soul Food Cypher is a freestyle rap community in Atlanta where aspiring and amateur rappers come to hone their lyrical and improvisational skills. The group’s monthly meetings, which are open to the public, feature a series of exercises designed to challenge participants. But while freestyle rap is often famed for its battles, the cypher doesn’t feel like a battleground. The emcees laugh and poke fun at each other in a manner that contradicts existing notions of negativity in rap culture.

“I had an interview with yo’ mama / She told me she ain’t like you / I guess that’s sort of fucked up / But you got a lot of pride, dude,” one rapper freestyles. The crowd chuckles.

Luke Legacy announces the onset of “Word Play.” Emcee Sean Gordon, known as Sean G, stands in the center of the circle. Short, slim and muscular, Sean G wears a black snapback over a black and white checkered do-rag. Founder and director of Soul Food Cypher Alex Acosta stands next to him holding an iPad. Acosta shows him an image of a rapper on the iPad’s screen, which he must then incorporate into his freestyle. Once Sean G uses the word, he is shown another and another, until he loses his flow.

As Mario Pagan, an amateur rapper who has been coming to Soul Food Cypher for a year, puts it, “If you’re a lyricist, it’s a place you’ve been looking for.”

While many people come to Soul Food Cypher for the community, others are here to further their careers. Acosta says the group provides a free platform for hopeful artists.

[quote_colored name=”” icon_quote=”no”]“In most other hip-hop performances and shows, you have someone on the stage and the show’s all about them,” Acosta says. “The great thing about Soul Food Cypher is any and everyone can walk in and become a star.”[/quote_colored]

Back in the circle, a teenager in a black hoodie takes the floor. Akil Bridges, an 18-year-old rapper and producer who makes music under the stage name “A.K.I.L.,” came to Soul Food Cypher after his manager suggested it.

“Tryna’ to be a mogul but first I gotta go local / To all the people listenin,’ I’m glistenin’/ Shinin’ like a diamond in the dark / My brain already got the spark like electrocution / Every beat is in my seat for execution,” A.K.I.L. spits bar after bar with skilled delivery, building up an impressive flow.

When he’s not rapping, A.K.I.L. retreats to the corner, reserved and introspective. He says he considers himself more of an artist. So does Sean G. For him, the “energy and representation of hip-hop” here keeps him coming back.