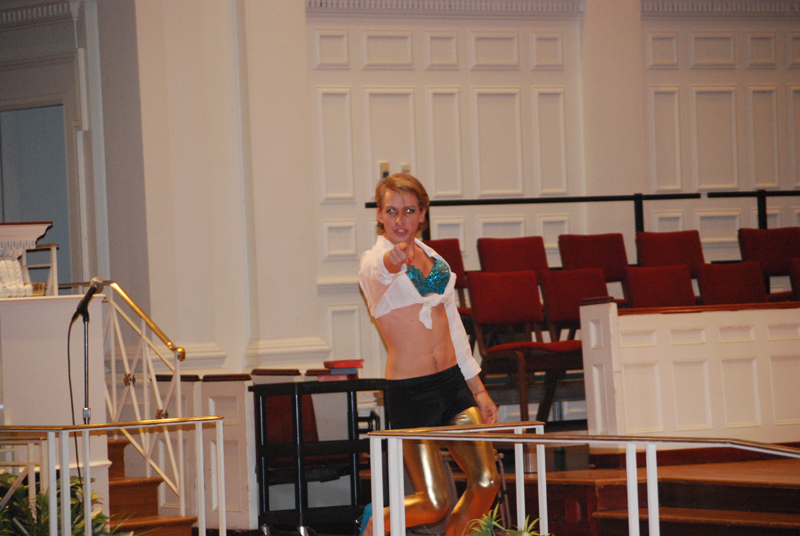 “I do believe that this church has never looked so fabulous,” Dooley’s words rang out through the voice of a student, his bones stark white against a billowing rainbow Pride flag he wore as a cape.

Guys rocking their first day of No-Shave November also rocked short dresses that were the envy of girls in the audience, long curly blonde wigs, various colors of sequined bras and skin-tight leggings. Girls danced in baggy sweatpants and backwards snapbacks, or kept it classy in suits and ties.

It was not uncommon to be completely unable to identify someone’s gender based on appearance. Everybody cheered for everybody.

Though this sight might not be common on campus (well, not yet), it was all perfectly normal last Friday when Emory Pride hosted the 2013 Drag Show.

Truly, nearly all aspects of Emory were represented in the Drag Show. EmRock, Emory’s music organization of all things rock, performed BeyoncÃ©’s “If I Were a Boy” and Lady Gaga’s “Born This Way.” A representative from the Student Alumni Board flaunted a cute white crop top, a bright sparkling blue bra and metallic gold leggings that I unsuccessfully tried to find online shortly after the show.

He strutted up and down the aisle as girls and guys alike cheered themselves hoarse. The Residence Life and Housing performer moved the audience with an impressive lip-syncing of Wicked’s “Defying Gravity,” complete with a full brown wig and robust chest. This earned the unashamed “tips” of giggling admirers in the audience, including someone who threw a $1 bill from the upper stands. By the end of the performance, more than half the audience was standing.

“It was so awesome to see all the groups so committed, 100 percent devoted to whatever character or gender they were being,” one performer said.

Other groups present at the Drag Show included Karma Bhangra, the popular Indian dance team; the Women’s Rugby team, which included costume changes and the finale dance scene from “Dirty Dancing;” Emory Spoke, with three incredibly attractive dancers in incredibly tight dresses; and many others. Though I’m unsure of the exact amount, I am sure that these lovely ladies racked up a significant number of tips.

These tips, plus the $5 admission fee, helped fund Emory Pride so it can continue to support and be a resource to Lesbian, Gay, Bisexual, Transgendered and Questionning (LGBTQ) and Ally undergraduate students. However, this year, Emory Pride announced that a portion of their proceeds will also go to “Lost-n-Found,” a local non-profit group whose goal is to help homeless LGBTQ youth in Atlanta.

Before the performances, the drag show hosts went over “a brief history of drag” and a Lost-n-Found presentation. Putting drag in perspective as a cultural movement helped the audience to understand drag on a deeper level.

“Even though it was really funny, I think [the drag show] was about more than just entertainment. It’s about awareness for LGBTQ culture, of course, but it’s also about challenging societal norms,” College freshman Rosalind Redgrave said.

“It’s weird to think that you can just assume something so personal like sexuality about a person just based on their clothing or body,” Redgrave said. Or, as one audience member (less eloquently) said, “Like, is that even a guy or a girl, I have no idea.”

Even though it’s safe to assume that many students came simply to see their friends dressed hilariously, the drag show may have actually changed the way they view the people around them.

“I just love how this is just an average Friday night. The fact that students feel so comfortable outside of their comfort zone is what makes Emory so special,” Subramanian said.

Technically, the performance was also a competition – and Residence Life and Housing won best overall. Still, that’s not really what the show is about. The message that drag sends is up for debate – however, it’s inarguable that this kind of performance is what makes Emory such a great place.