With initiatives such as increased cultural inclusivity and tradition-building, College junior Meena Iyer seeks to add further dynamism to the Student Programming Council (SPC). Based on her innovative ideas and visions of SPC’s role at Emory, the Wheel enthusiastically endorses Iyer for SPC President.

Iyer transferred from Occidental College (Calif.) after her freshman year, where she participated in student programming. After cultivating a passion for programming, Iyer immediatly joined SPC in the fall of 2011. Iyer has distinguished herself as a candidate with tremendous follow-through, as evidenced by the success of the “End of the World”-themed Dooley’s Week Wonderful Wednesday, which she co-organized.

She also co-chaired Homecoming week this past fall, which featured musical performances from Slightly Stoopid and Cazzette. Emory’s first Chili Cook-off was co-organized by Iyer, and this year, she has also focused her efforts on expanding SPC’s outreach and partnerships.

Iyer envisions the creation of a more inclusive campus culture as a central role for SPC. This includes partnerships with two to three cultural groups a semester to not only recognize the achievements of such groups but also to promote culture at Emory. Iyer seeks to increase the transparency of SPC, holding the organization to a higher standard of accountability by immediately announcing finalized event dates and publishing a quarterly report. This report would recap past SPC events and allow students to evaluate SPC’s work.

In addition, Iyer sees SPC as an organization responsible for continuing to foster tradition at Emory. Iyer plans on enhancing Welcome Weekend, generating Emory pride for new and returning students by sponsoring events such as artist performances or alternatively a small circus act with music and food.

The president of SPC is not only an internal executive in the organization but also serves as an external head of programming. Iyer’s achievements have demonstrated her ability to organize large-scale events. Given the debauchery rampant at large student events, risk management is a top priority for Iyer. She is also looking to step up SPC’s responsibility by emphasizing sustainability. This initiative would include establishing a sustainability chair as part of an effort to have all SPC events be zero-waste.

With a proactive mentality and a passionate, dedicated approach, Iyer is the candidate best suited for SPC President – one who is aware of the organization’s role in the Emory community. She seeks to leverage SPC’s wide reach and resources to make Emory an exciting school that students are proud to attend. 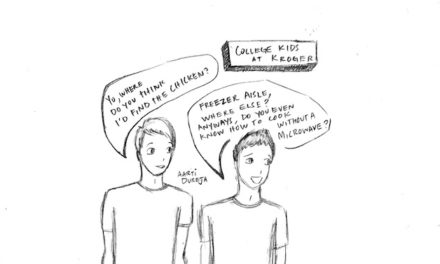 Origins of Food Overlooked in Society