‘Liz and the Blue Bird’ Treats Viewers to Beautiful Composition 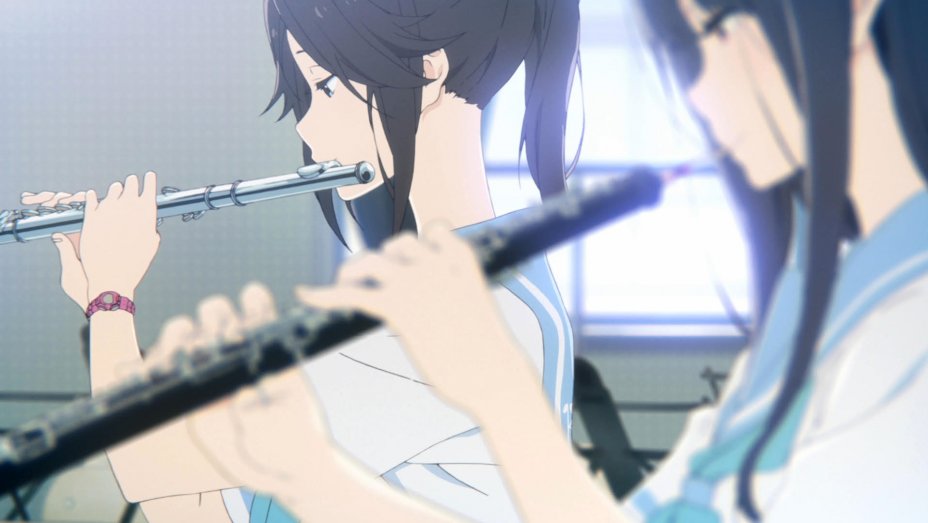 There is a subtle beauty in the way cinema can use motion to define emotion. The trepidation of the slightest half-step backward, the looseness of a friendly wave, the brief moment of hesitation to lean your head on a close friend’s shoulder — the tiniest of movements on-screen speak volumes to the character work by the artists. Body language alone can distinguish between whole-hearted honesty and a conflicted half-truth, just as the way one clings to another can turn a hug from a warm expression of love to a silent cry of desperate anxiety. “Liz and the Blue Bird,” in achieving this level of expression through detailed character movements and focused cinematography, quietly displays the depth of what an animated film can accomplish and delivers one of the most inspiring visual creations of this year.

The narrative, both literally and emotionally, takes place on a very personal level, confined within the walls of a high school and the pages of a storybook. The conflict in “Liz and the Blue Bird,” much like the overall film itself, is unconventional: oboist Mizore Yoroizuka (Atsumi Tanezaki) and flutist Nozomi Kasaki (Nao Touyama) both play in their high school concert bands. The two are best friends preparing for their final performance, a piece called “Liz and the Blue Bird,” and their impending graduation. Both face their own anxieties in the upcoming separation as Mizore is beyond shy and holds Nozomi as the center of her universe, while Nozomi is unsure of her own future, yet worries she’ll hold Mizore back. As the two struggle with their performance of “Liz and the Blue Bird,” the scene sometimes shifts to depict the events of the book on which the song is based: a fairy tale about a lonely young woman named Liz who befriends a bird that takes the form of a girl. Eventually, Liz decides she must set the bird free, and this part of the story is represented in the song by the duet that Mizore and Nozomi perform.

In lieu of establishing glorious setpieces, the cinematography works in this minimalist setting to acutely depict the contrast between the characters’ feelings and their inability to communicate them. This brilliance manifests in simple ways: Mizore standing before a window, appearing small in comparison to the bright light outside. Whereas Nozomi, happily waving at Mizore from across the school courtyard, fills up the window on her side in comparison, yet leaves it bleakly barren when she walks away. The film gives weight to the ways in which the two are just slightly off, like their performance — they are ever so close, yet slightly out of sync, unable to truly understand each other.

More than anything, “Liz and the Blue Bird” is another testament to the brilliance of director Naoko Yamada (“A Silent Voice,” “K-On!”) and her team at Kyoto Animation. The entire cast delivers great voice performances, but the dialogue’s subtle nature and the story’s tone really allow Yamada’s direction to shine. The acute attention to characters’ body language, the way Mizore is always pacing slightly behind Nozomi and how the frame at times focuses solely on how a character walks, are all evidence of her talent for building character and wordless drama through purely cinematic means. Some sequences are near silent, bringing attention to the unspoken truths of the characters’ emotions. From the cinematic detail to the inclusion of scenes rendered in an astoundingly beautiful watercolor style, Yamada and her team’s work represents not only a mastery of the animated form but a continued drive to push the medium to further artistic heights.

The movie is also built on a close relationship with the genius soundtrack composed by Kensuke Ushio (“A Silent Voice,” “Devilman Crybaby”). He continues to exemplify his own versatility of style while also displaying a rich understanding of the core ideas of the film. His incorporation of diegetic sound into the score emphasizes Yamada’s visual work while still creating a tranquil, heartfelt, ambient tone. This is, of course, not to undersell the film’s orchestral compositions. The actual duet for the climactic arrangement of “Liz and the Blue Bird” is astoundingly gorgeous and seemingly gives proper weight to every note, acting as the one genuinely open conversation between Mizore and Nozomi.

The film is based on the television series “Sound! Euphonium,” but watching it is unnecessary to understand the movie. The characters have received a nearly complete redesign from television to film, appearing in a style akin to Yamada’s previous film, “A Silent Voice.” The relation to this series does lead to some characters who are introduced with little explanation or character establishment, but this results in filler scenes at worst.

“Liz and the Blue Bird,” unlike more abstract animated films, finds depth in the artistic precision of its more grounded style. The film is more than a series of pretty drawings, but rather a visual experience where every thin line and beam of light is exactly where it needs to be to allow each frame to build on all prior frames. Using this tale, Yamada conducts a visual orchestra of animation from a soft overture to a bittersweet crescendo.