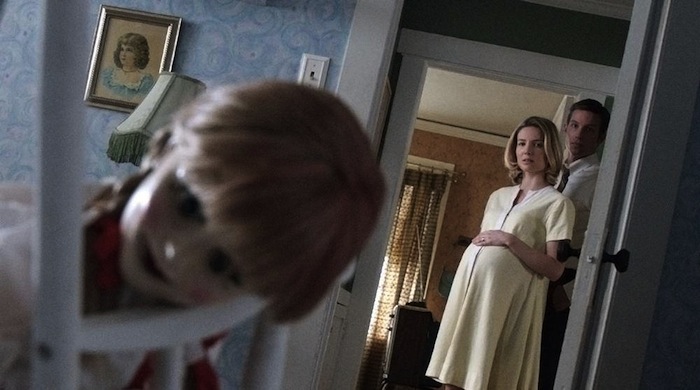 Most people expect to be frightened by horror films. Anybody who embraces this expectation will inevitably pay close attention to how horror films employ traditional scare tactics, such as making the familiar into the alien or vilifying the innocent in order to achieve this effect. Manipulations of these tactics can instill a deeper and more satisfying level of fear, one that transcends gimmicky ‘person-jumping-out-behind-a-corner’ scenes.

Since the horror genre, and possession films in particular, depends so much on the same basic narrative (someone gets possessed, they think it’s in their head, they start losing it as they attempt to convince others, they seek help or advice from an expert, they move, they’re still possessed and then there’s eventually a ritual sacrifice at the climax), these manipulations are essential in judging a film’s originality.

“Annabelle,” the prequel to last year’s unexpected hit “The Conjuring,” has some memorable and unique moments but ultimately falls victim to complacency due to its dependence on predictable and overused horror clichÃ©s.

Directed by John R. Leonetti, “Annabelle” begins with an out-of-the-blue occurrence involving a violent intrusion of two satanic cult members in the home of a newly situated couple, John (Ward Horton) and Mia (Annabelle Wallis). Although the motive behind the attack is not explicitly stated (a detective’s explanation is that: “Crazy people do crazy things”), it is clear that a large doll that John recently gave Mia plays a significant role in the episode. After several more eerie and inexplicable encounters with an invisible, yet omnipresent force within the house, Mia urges John to get rid of the doll and suggests that they immediately move to an apartment in order to put the odd occurrences behind them.

After some time has passed, Mia has given birth to her daughter and John has landed a job in an extremely competitive and time-consuming medical program. However, the doll mysteriously reappears in a moving box, and things get exponentially worse for Mia as she struggles to convince John of her sanity while simultaneously protecting their infant daughter from supernatural forces.

In order to evaluate the originality of “Annabelle,” it’s necessary to first compare it with its loosely-related sequel, “The Conjuring.” Due to the success of “The Conjuring,” many people will go to see this film because it has been marketed as its prequel. However, the word prequel is misleading because “Annabelle” deals only with a brief side story featured in “The Conjuring.” In that case, the Annabelle doll was simply used to introduce the ghost hunters in the beginning of the film and had no causal relationship with the unfolding of events within “The Conjuring.”

Regarding the scope of both films, “Annabelle” mainly focuses on Mia and her daughter, whereas “The Conjuring” had a family of seven and two intriguing ghost-hunters (Vera Farmiga, “The Departed” and Patrick Wilson, “Insidious”). Therefore, “The Conjuring” had more to work with in terms of physical space and character development, and “Annabelle” suffers from the lack of these elements.

The ghost hunters were arguably the most original aspect of “The Conjuring,” because their perspectives gave the film a fresh angle that both acknowledged and built upon the clichÃ© of demonic experts. “Annabelle” uses the characters of a priest (Tony Amendola), who attempts to alleviate the demonic powers through faith, and a wise librarian (Alfre Woodard), who has experience with supernatural powers, in a similar manner but doesn’t spend sufficient time developing their characters. At one point, the librarian’s past is explored in a brief scene, but her involvement with Mia’s affairs seems forced and unnatural. Similarly, the priest is just used to show how ineffective faith and religion are in the midst of satanic powers.

Depending on what you look for in a horror film, you will be either pleased or frustrated with how little background is provided regarding the origin and motive of the demonic presence. I appreciated this aspect because I’ve grown bored of the endless scenes centered on sleep-deprived characters hunched over dusty books with grotesque illustrations of ancient demons and horrific rituals. This faster pace accelerates the film’s rhythm and distinguishes it from the “Paranormal Activity” franchise, which dwells on relatively trivial disturbances like a door mysteriously closing by itself.

I had no qualms with Mia and her confinement to the tiny apartment, but some may take issue with one actor taking up so much screen time and the prevailing sense of claustrophobia that accompanies a modestly-sized urban apartment. Some horror films cleverly use claustrophobia to tap into a universal anxiety, but in this case, the limitation of space comes at the expense of creative content. My favorite scene actually occurs in an elevator and utilizes the sense of claustrophobia in an appropriate way.

Also, this movie is nothing like Chucky from “Child’s Play.” Yes, they are both about demonic dolls, but Annabelle is an inanimate object that signals the presence of something far more disturbing and threatening. Trust me, once Mia sees what is actually attached to the doll, you’ll think twice about seemingly mundane and commonplace objects within your home. In fact, I appreciated that the doll never really came to life because it generated constant anticipation and stayed clear of the absurd silliness of a killer doll.

All in all, “Annabelle” has all of the components of a stereotypical horror film but with several original moments that are reminiscent of its better half, “The Conjuring.” It’s clear that this film’s originality suffers from using the success of “The Conjuring” as a marketing crutch (“Before the Conjuring, there was Annabelle” serves as the centerpiece of its marketing campaign). However, I’m an avid fan of horror films and genuinely enjoyed the experience due to a lively crowd (which can make even the worst movies unexpectedly entertaining) and a thorough obsession with any relationship to the story underlying “The Conjuring.”