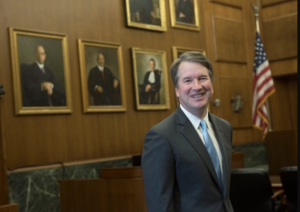 “With the retirement of Justice [Sandra Day] O’Connor and Justice Kennedy … there are not five justices on the United States Supreme Court anymore who are clearly committed to that holding, so it seems that Roe v. Wade could be overruled,” Schapiro said.

The panelists agreed that Kavanaugh is unlikely to support the decision should he have the chance to vote on the issue in the Supreme Court.

“I think most people assume that he would not be sympathetic to [constitutional abortion rights] and would … perhaps, eventually, vote to overrule Roe v. Wade,” Schapiro said.

Kavanaugh told Rep. Susan Collins (R-Me.) that he believes Roe v. Wade is “settled law,” CNN reported in August. However, in October 2017, Kavanaugh wrote in a dissenting opinion that “the government has permissible interests in favoring fetal life … and refraining from facilitating abortion,” according to CNN.

The Senate Judiciary Committee voted 11-10 on Friday to push Kavanaugh’s nomination to the Senate. Republicans and the White House agreed to a one-week Senate vote delay as the FBI investigates sexual assault allegations against Kavanaugh, according to CNN.

The panelists also discussed ways that states have used to limit abortion despite the constitutional right afforded to women by federal law.

According to Schapiro, there are “three kinds of laws that have … been passed and litigated in the current legal regime” within states that effectively make access to abortion care difficult or even near-impossible for women. The first are pre-abortion requirements, such as ultrasounds and waiting periods, that make obtaining an abortion more costly, while the second concerns banning abortions at various points in pregnancy.

“I think about 21 states … say that abortion is illegal past 20 weeks. The constitutional standard says pre-viability,” Schapiro said.

The third kind of law is known as T.R.A.P., or Targeted Regulation of Abortion Providers, which dictate that clinics that provide abortions must comply with specific requirements and has made running abortion clinics a burden.

When considering how Georgia compares with the rest of the Southeast in terms of abortion care, Gordon quipped, “Less bad, with that very much being a relative term.”

“All of the Southeast has really, really restrictive laws on abortion. Mississippi, for example, only has one abortion clinic in the entire state,” Gordon continued. Georgia has around 10 abortion clinics, making the state a hotspot for women in the South who seek adequate health care.

Still, Gordon said it is “not that easy” to get an abortion in Georgia.

On top of these regional difficulties, the cost of an abortion alone provides an entirely separate barrier to health care access for women.

“Out of pocket abortion clinic cost … is between $500 and $2000, depending on gestational age and depending on where,” Lathrop said.

When asked by a student in the audience whether Georgia is likely to pass a complete ban on abortions if Roe v. Wade is overturned, Rochat was unequivocal.

The panelists exhorted the attendees to exercise their rights.

“Vote,” Gordon urged, “in every single election. Reach out to [your state governments], tell them, ‘Hey, I care about abortion rights. What are you doing about it?’ ”